Almost 10,000 security personnel to be deployed for Ashura security 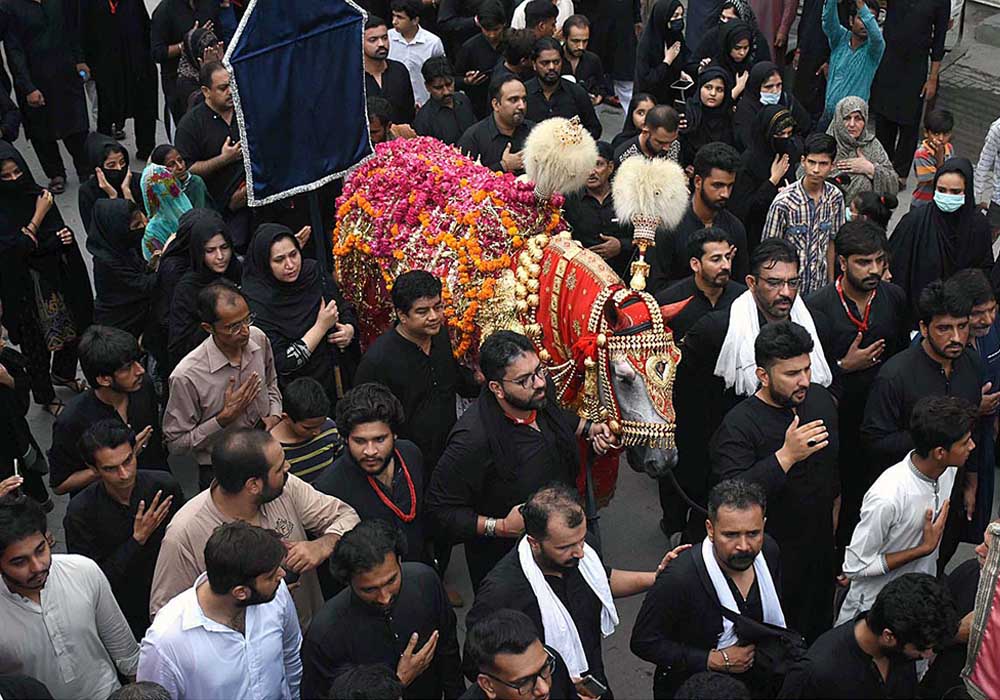 As many as 10,000 police officials will be deployed to provide security cover to Muharram’s main majalis [meetings] and processions in different parts of the city consecutively for two days: Monday and Tuesday.

The snipers will be deployed on the roofs of the building falling on the routes of the main procession in the city.

The police said that a total of 3868 meetings were due to occur from the first of Muharram to the day of Ashura in different places of the provincial capital.

Capital City Police Officer Ghulam Mahmood Dogar said that strict security arrangements were made for the month of Muharram and especially for the day of Ashura as strict surveillance would be ensured on the routes of all processions through the Safe City Authority’s cameras and 900 cameras of the local administration. He said that the participants of the main mourning procession would be provided three layers of security and nobody would be allowed to enter the mourning processions and Majalis without complete checking. CCPO Dogar said that the central mourning procession and other sensitive programs would be continuously monitored with the help of CCTV cameras of the Punjab Safe Cities Authority and the district administration, adding that strict action would be taken against those spreading hate material, literature and divisive propaganda. He said that all police officers should be fully aware of logistics and human resources at the police station, circles and divisional levels.

The CCPO said that drone technology would be used on the routines of processions in the city for surveillance purposes, and directed the senior police officers to stay vigilant by getting information through the CCTV cameras and Control and Monitoring Room of the Deputy Commissioner’s office. CCPO Dogar also visited different Imambargahs and processions in the city to monitor the security arrangements while the relevant officers briefed him about the security plans during his visits. The CCPO keenly observed the citizens’ checking process during their entry into Imam Bargahs and majalis, vantage points, and parking arrangements for the people coming there. “No negligence at all,” warned CCPO Dogar while directing the police officers to ensure the security of the citizens. He also directed to clear roads from encroachment for security reasons.

The CCPO also directed the officials to ensure surveillance and monitoring of bus stands, entry and exit points of the city and keep an eye on the surroundings. For security purposes, walk-through gates and metal detectors were also being used outside the Imambargahs and meeting places.

Earlier, Inspector General of Police (IGP) Faisal Shahkar had asked the officers to ensure foolproof arrangements for the security of Ashura processions and Majalis, adding that police should also ensure the active role of peace committees in collaboration with the district administration and establish an atmosphere of mutual harmony with the scholars of all schools of thought and civil society. Shahkar said special attention should be given to the security of places near the entrance and exit points of the city. He stressed the best security arrangements for Imambargahs, mosques and other places of worship.

He instructed the officers that all the routes of the Ashura procession should be monitored with CCTV cameras and the Special Branch, CTD and sensitive agencies should speed up search and combing operations.

Meanwhile, the district government on Sunday finalised arrangements for Ashura processions during the 9th and 10th Muharram in the provincial capital. Lahore Deputy Commissioner Umar Sher Chatha reviewed the arrangement and visited the routes of mourning processions and checked security arrangements.

Accompanied by DIG Operations Afzal Kausar, he visited Mochi Gate, Mubarak Haveli, Nisar Haveli and other Imambargahs to review the arrangements made on the occasion of Ashura.

DC Lahore Umar Sher Chatta said that the patchwork work on the procession route is complete and the hanging wires have been removed. He said that the encroachments have been eliminated and CCTV cameras have been installed. “The procession will be monitored with the help of CCTV cameras from the DC office control room,” he said. The DC also checked Rescue 1122, medical services and other services near Imambargahs and said that continuous monitoring of security arrangements and administrative matters would be carried out. He said that the government was using all resources to maintain law and order during Muharram and in this regard, law-enforcement agencies had been mobilised.

The DC appealed to the organisers to remain vigilant and also deploy their voluntary security guards so that no unauthorised person could join the mourning procession.

Meanwhile, the Punjab government has decided to suspend cellular phone services on Monday and Tuesday.