Murad says decision to give relief cuts to any embankment is made in consultation with irrigation experts, top engineers of army corps 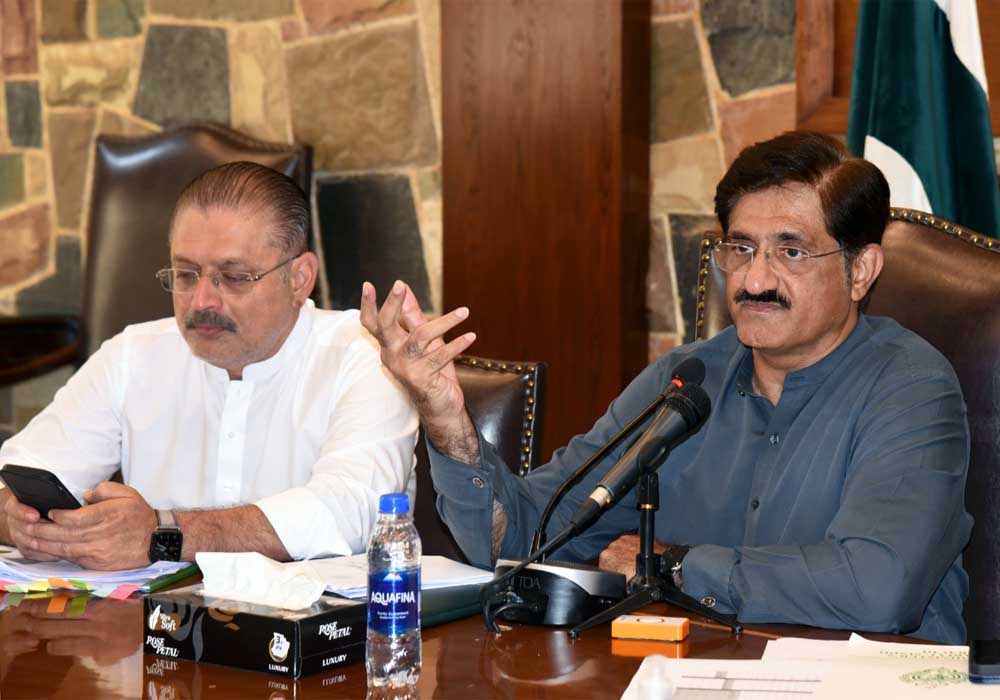 Sindh Chief Minister Syed Murad Ali Shah on Wednesday said that his province received unprecedented rains of 1,100mm and on top of it an additional 30 MAF deluge of Balochistan’s hill torrents came down wreaking havoc in the cities and towns located on the right bank of Indus River.

Addressing a press conference at the CM’s House, Murad said a similar situation emerged on the left bank of the river, therefore serious humanitarian crisis erupted. He said the Sindh government had been fighting to rescue and rehabilitate the people since then. He was flanked by Information Minister Sharjeel Inam Memon, Excise Minister Mukesh Chawla and Special Assistant Syed Qasim Naveed.

Murad said that in order to contain hill torrents, FP Bund was erected after the floods of 2010, but even then the flood was so frenzied and high that it caused five breaches in the FP Bund and flooded various towns and villages on its way to the right bank. On the left of the Indus River, major cities like Shaheed Benazirabad, Sanghar, Umerkot, Mirpur Khas and Badin are located. Their water would be discharged into Shakoor Lake and the cities and towns located near the Indus River would have to pump their water into it (river), he said. “But this will take time,” he said.

Murad said that the river position at Guddu and Sukkur barrages was normal, as a high flood was passing through the barrages and discharge was continuously declining. Comparing the discharge at Kotri for the last two days, he said that its flow was 575,435 cusecs upstream and 555,185 cusecs downstream, which showed a decline of 50,759 cusecs on September 13. Similarly, the Kotri was flowing at 525,696 downstream and 508,981 upstream, which had shown a decline of 100,497 cusecs, he said.

“Level at Dadu-Moro Bridge has reduced by 4.4 feet, Manchar Lake by 0.8 feet and Amri Bridge by 3.2 feet,” the CM said, adding that the Johi Branch had also shown a reduction of water at its RD-67 (Khairpur Nathan Shah Road).  Murad shared the details of the current situation of inundation on the right bank of Sukkur Barrage and said the water level had reduced by around two feet at Mehar City Ring Bund and KN Shah Main Drain flowing in MNV.

He added that the water level had also been reduced by a foot at Ring Bund Bhan Syedabad – the overall water level is depleting in the upper areas of Taluka Qubo Syed Khan, Shahdadkot, Qambar, Warah and Nasirabad.

The CM said that the decision to give relief cuts to any embankment was made in consultation with irrigation experts and top engineers of the army corps, and added that even retired irrigation chief engineers were also consulted. “The so-called experts on social and mainstream media are making baseless statements about the relief cuts,” he said, and added that the authorities had tried to flood katcha areas to protect the pacca areas. “The decisions might have backfired but were taken after proper consultation with experts and with sincerity,” he said.

The chief minister said that paddy was sown over an area of 1,487,870 acres, of which 1,063,273 or 71.46 percent had been damaged. “I am trying to protect the crops still standing over an area of 52,100.37 acres by providing them water,” he said, and added that he had directed the Irrigation Department to open the Rice Canal, NW Canal, and other branches concerned to provide water to the rice crops.

Talking about ration bags, Murad said that so far 425,321 ration bags had been provided by the said organisations, including 17,750 on September 13, and 406,446 litres of drinking water had been distributed. He said that his government, with the support of the federal government, armed forces, philanthropists, and other organisations, was working hard to cater to the needs of the flood-affected people.