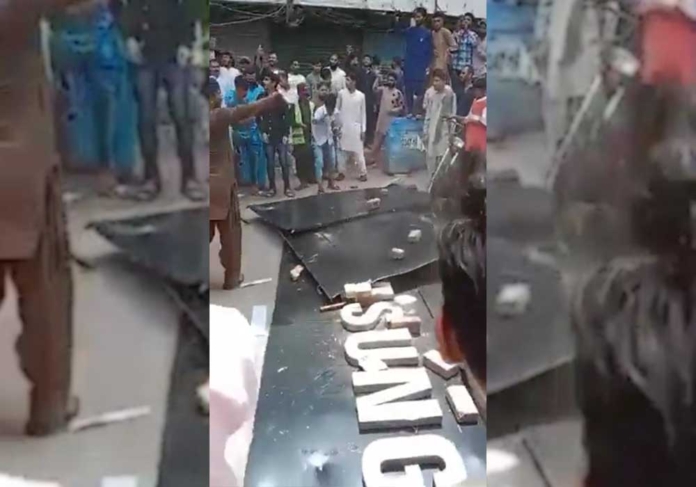 Police in Karachi detained 27 employees of a mobile phone company in Saddar on Friday following a violent protest by a mob over alleged blasphemy.

A spokesperson for the Karachi South police in a statement said that the station house officer (SHO) of Preedy Police Station received information at around 11 am that a “WiFi device” had been installed at the Star City Mall, which allegedly played comments against Prophet Muhammad’s (PBUH) companions.

Witnesses at the site told that protesters, who had gathered at the site, damaged signboards at the mall, resulting in the closure of the mobile phone market.

“Realising the gravity of the matter, the Preedy SHO rushed to the spot, got the device shut, and seized it,” the statement read. It added that 27 employees of a private company were also detained.

The spokesperson said an inquiry committee led by the Saddar SP had been constituted to investigate the matter and if anyone was found involved in blasphemy then strict legal action would be taken against them.

Meanwhile, South SSP Asad Raza said that the police were trying to know, with the help of the Federal Investigation Agency’s (FIA) Cyber Crime Wing, about those responsible for installing the device. He added that “27 men [from] Samsung office” had been detained and an inquiry was underway.

For its part, Samsung Pakistan issued a statement, saying the company maintained neutrality on religious sentiments.

“Samsung Electronics has reiterated its firm stance that it endeavours to maintain objectivity on all matters of religious significance … with reference to the recent developments in Karachi, Samsung Electronics stands firm on its stance that the company has the utmost respect for all religious sentiments and beliefs and holds the religion of Islam in utmost respect.”

The company also said that it had “immediately” started internal investigations into the matter.