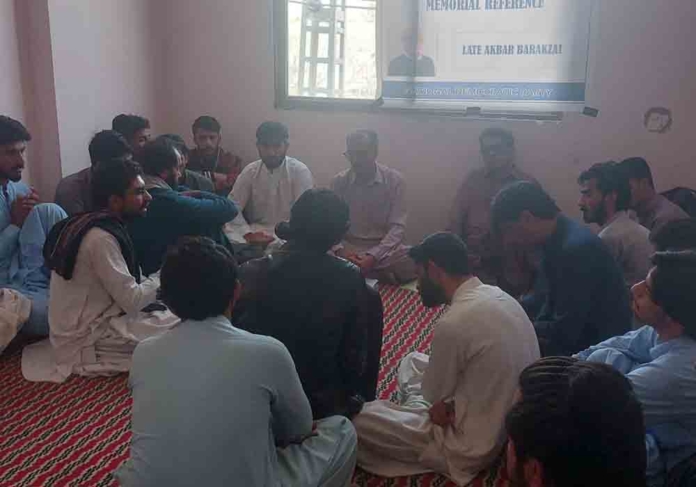 National Democratic Party (NDP) held a memorial reference for the legendary Baloch figure, Akbar Barakzai, in its party office in Quetta on Sunday.

NDP leaders and Baloch literary figures spoke about the political and literary contributions of Barakzai at the memorial. Beginning the conference, the Central Organising Member of NDP, Salman Baloch spoke about the life of Barakzai, personal, literary and political. While addressing the gathering, Salman said that when Barakzai began politics with National Awami Party (NAP) in the 1950s. He was a student and plenty of his companions were arrested.

“Barakzai tried to escape from being arrested, however, he mentioned in one of his interviews that he was arrested for one day in Karachi along with Gul Khan Naseer,” the NDP leader said, adding that “when he tried to speak in Balochi language with Naseer, he was forbidden, which hurt him”. But he protested and spoke in his native language.

Looking at the disturbing situation in the country thereafter, the NDP leader said, his companions asked him to go into exile. He added that Barakzai went in exile in the Gulf countries and then to Syria, Lebanon and Baghdad. “One of the struggles of Barakzai was that wherever he went, he tried to unite the Baloch people,” Salman said. In exile, Barakzai worked on the literary and political activities but could not continue longer when the Iraqi government stopped him from participating in any work for the Baloch cause if he wanted to remain in the country, Salman narrated. “It led Barakzai to move to London,” he added.

The NDP leader further said that when Barakzai immigrated to London, he worked for an English magazine named “People’s Front” and was involved in several other literary and political activities. Barakzai had also worked on propagating the Baloch national cause to the Baloch people out there, he said.

“After thirty two years of his life in exile, Barakzai came to Karachi in 2002,” he said. And then he kept coming and going to Karachi on various occasions, the NDP leader said. “We ought to make Barakzai a debate in the Baloch society and continue his works,” Salman said.

The chairman of University of Balochistan Balochi Department Dr. Raheem Mehr was among the chief guests of the conference and spoke on the literary contributions of Barakzai. He told the audience that in the Baloch national literature, the basic activities in all the aspects of the Baloch nation were linked to Karachi. “All the works of Baloch literature and politics began in Sindh’s capital,” Dr. Mehr said. Many times they were even not permitted to work in open, he claimed.

While speaking on the importance of organizations in promoting literature and connecting it with Barakai, Dr. Mehr said that Abdul Qayyum had the idea of creating the Balochi Academy in 1950s, which then came to Karachi in 1958.

“Jumma Khan and Akbar Barakzai were among the first figures welcoming the initiative of Qayyum Baloch and being a part of the Balochi Academy in Karachi from day one,” Dr. Mehr said.

While discussing historical incidents of Barakzai, Dr. Mehr quoted Murad Sahir that once under the leadership of Sher Mohammad Marri, Sahir, Barakzai and some others participated in a ceremony held for the promotion of the local languages in Lahore. “Sahir said that they had no Baloch literary instruments to represent the Baloch culture but had to do something so that they were reckoned and their language had a status in the country,” Mehr said, adding that Sahir said they had only three to four printed Balochi books which they took with them. He said that yet they felt it their need and represented their culture among the different cultures of Pakistan.

Dr. Mehr said that in the Baloch history, each time politics and literature merged, resulting in influence on Barakzai’s literary character. He said that all the poems of Barakzai were connected with his ideology and his land. He concluded, saying that we could get more of Barakzai’s works recorded only if he had written his autobiography. “Not preferring to write their [Baloch intellectuals] autobiographies is a loss to and injustice with the next generation of the Baloch who will have no records of their intellectuals and past experiences,” Dr. Mehr said.

Abdul Rehman Dad (famous as AR Dad), a professor of Balochi in the University of Balochistan, spoke about different literary aspects of the Baloch figure, saying that he had prepared a paper on Barakzai which is yet to be completed. His paper comprises two parts; the first is like an autobiography compiled in a way as though Akbar himself is speaking and the other part is from another angle.

Dad spoke in the first part about his early life, saying that his family was settled in the Irani part of Balochistan and then immigrated to Karachi. Dad read further that Barakzai belonged to a family in which all the debates and discussions were based on the circumstances of Balochistan and politics. He said that before Balochistan’s accession to Pakistan, there was a resistance movement in the province which was discussed many times in his home.

“Yousuf Aziz Magsi was named on plenty of occasions in his home; Balochistan and Balochi were always in their minds due to those discussions,” he added.

Karachi was the center of politics and literature at the time, Dad read, naming various literati and political leaders including Yousuf Aziz Magsi, Mohammad Hussain Anqa, Ghous Bakhsh Bizenjo, Gul Khan Naseer and so forth.

“Barakzai got influenced from them to work on literature and politics both,” he added.

The professor added that in a gathering of Ghous Bakhsh Bizenjo in Karachi in 1956, Barakzai also participated where Naseer recited a poem and he himself was inspired by Bizenjo’s political character. “He was a student back then but also participated in politics [with NAP] in 1957/58,” Dad read. At the given time, Dad added, politics and literature were connected with each other.

The Baloch professor said that Barakzai was also a famous linguist on which he had written several articles, but he was more a poet. He began with prose but turned to poems in the latter half. His first poem was published in Mahtak Balochi magazine of Karachi (Monthly Balochi Magazine) in 1958, which was declared by Azad Jamaldini as an “unmatchable spring”. He began with his poems in the name of Mohammad Akbar Baloch and then later on became Akbar Barakzai. “Rest is history for Barakzai,” Dad maintained.