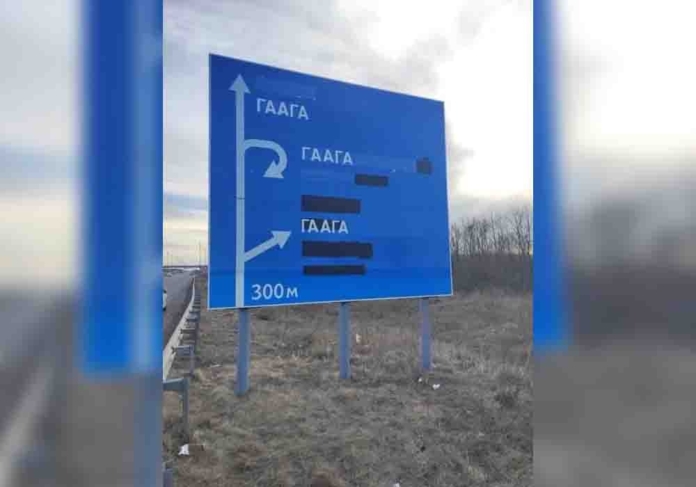 Defaced directional signage to send a message to Russian invaders has appeared on Ukrainian motorways, with all directions pointing towards The Hague in The Netherlands, where the International Criminal Court (ICC) is situated.

The development comes after the International Criminal Court (ICC) decided to launch a probe into possible Russian war crimes unfolding in Ukraine.

Images of the sign, that was tampered with, appeared on social media with the actual locations all changed to read ‘The Hague’ after an ICC prosecutor Karim Khan announced on Monday that an investigation would be launched into Russia for possible war crimes.

Khan told The Guardian that the probe was possible owing to a previous preliminary investigation into Crimea and the Donbas and at present over the Russian invasion of Ukraine. Even though Ukraine was not a part of the ICC, it granted jurisdiction to the court to follow through with the investigation.

The ICC is an international judicial body that came into being through a treaty called the Rome Statute, which was signed by 60 countries in 1998. It laid the groundwork for the ICC to be formed in 2002 as a court that prosecutes for war crimes, genocide and crimes against humanity.

Regarding the signs, a user noted that Ukrainians had “very kindly” placed directions for The Hague on the motorway for Russian soldiers.

Another pointed out that Ukrainians had employed their funny bone in changing the signs since Russians used old Soviet maps and not the satellite system for movement.

One pointed out that all roads led to The Hague for Russia.

New road signs put up to steer invaders — all roads lead to The Hague. pic.twitter.com/FJ28EqLsYx

ICC prosecutor Khan also told the media outlet that it would be quicker to get the investigation going if a member state of the ICC brought the case to his office instead of him taking approval from the court’s judges to pursue the inquiry.

Earlier on Monday, Lithuania that shares a border with Russia, had called upon the ICC to investigate the war crimes of Russia and Belarus in Ukraine. The Lithuanian Prime Minister Ingrida Simonyte had called Russian President Vladimir Putin’s actions as tantamount to homicide, expressing hope to The Washington Post that he would land in the Hague.

A day after Khan announced ICC’s intentions, the mayor of Lithuania’s capital city, Vilnius, spray painted the words “Putin, the Hague is waiting for you” on the road opposite the Russian embassy. Speaking about the 20-meter-long sign on the road for the Russian president, Mayor Remigijus Simasius told Reuters that Vilnius as a city championed art and particularly liked art that sent a message of peace. The message, he added, was that “war criminals must end up in Hague, in the criminal court”.

Lithuania was once a part of the Soviet Union and was under Moscow’s rule but declared independence in 1990. It became a full-fledged member of the North Atlantic Treaty Organisation (NATO), which has long been a bone of contention for Russia.

Moscow had demanded that NATO forces be diminished in Eastern Europe and called for Ukraine not to be given admission in the alliance. Both the United Nations and the US refused these demands, which led to a full-blown invasion of Ukraine.

The invasion had intensified on Tuesday, with Russia warning inhabitants in the Ukrainian capital of Kyiv to leave their homes, while they unleashed rockets on another city, Kharkiv.