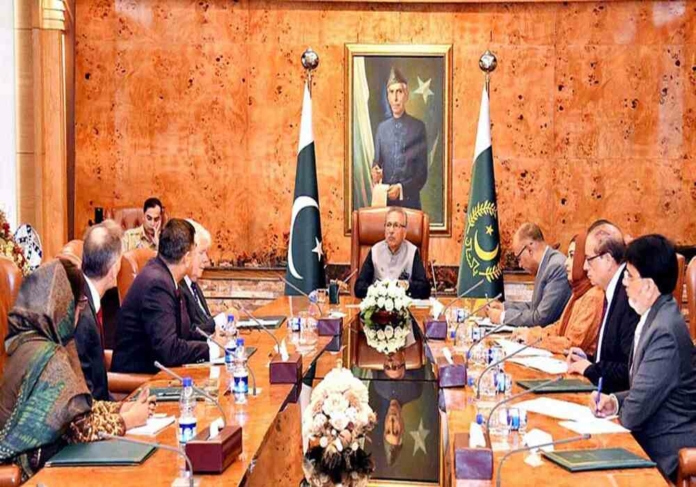 The president expressed the need for strengthening collaboration with the Royal College of Physicians (RCP), UK to bring about a fundamental change in the quality and standards of the healthcare system of Pakistan.

Such collaboration would provide cutting-edge quality healthcare to the people of Pakistan and help meet the WHO 2030 targets, he added.

He further emphasized that the MRCP exam was an important opportunity for medical students to improve their clinical examination, communication skills with patients and diagnosis interpretation.

He also expressed his satisfaction over declaring CMH Lahore as the second centre for holding MRCP exams after Islamabad-Rawalpindi on his recommendations and expressed the need for declaring other big cities of the country as MRCP exam centres, especially in Part-II Clinical to reduce the backlog of the exam aspirants across the country.

He said with concern that the estimated 24% of our population was facing mental health conditions which were causing stress and tension in society, besides increasing the vulnerability of the stressed population to resort to drug use, violence and extreme behaviors.

He urged the government to take immediate, meaningful and practical speedy measures for increasing the number of trained and qualified psychiatrists, psychologists and supporting staff on a top priority basis which would strengthen the mental health care system in the country.

He also appreciated Professor Aamir Ghafoor Khan for being the first Pakistan-based physician to be awarded the Practical Assessment of Clinical Examination Skills (PACES) Champion Award for the year 2021-2022.Prof.

Charles Twort, Chair MRCP-UK Exam, Royal College of Physicians informed the president that RCP was working with partners in Pakistan under the future hospital Pakistan programme, which was an entirely modern model of integrated healthcare support aimed at enhancing patient care in hospitals and community settings.

Meanwhile, President Arif Alvi addressing the distribution ceremony of Pakistan Engineering Council’s Engineers’ Excellence Awards 2020 and 2021 said the investment on human resource was inevitable to accomplish the forefathers’ vision for a successful and prosperous Pakistan, by exploiting the immense potential in the fields of engineering and technology.

He said it was the responsibility of the institutions like Pakistan Engineering Council to create an atmosphere of excellence. At a time when huge quantum of information and teaching material was available in the cloud technology, the countries like Pakistan had no excuse to miss the bandwagon.

He questioned as to how long Pakistan would continue to bank on others’ consultancy for development projects, and emphasized the need for producing quality human resources in all required fields.

The president said through brain drain, Pakistan had suffered a lot and called for the an atmosphere to persuade the skilled workforce to serve in the country out of no compulsion.

The president also appreciated the PEC for its several initiatives, which included entrepreneurship, training of engineers, development of matchmaking portal, development of green energy building code, upgradation of the PEC’s bidding documents and re-activation of Pakistan Institute of Cost and Contracts for enhancing the role of engineers in the socio-economic development of the country.

Earlier, PEC Chairman Najeeb Haroon said being a powerhouse of professionals and a think tank, the Pakistan Engineering Council was determined to promote real professionalism and discourage pseudo-intellectualism.

He said the PEC had got the distinction of getting membership from different reputed international bodies like Washington Accord.

He said Pakistani engineers had been contributing to the country’s socio-economic development by rendering their services in the fields of nuclear, construction, irrigation and others. Following the destruction of dams by the floods, the Pakistani engineers launched their study on the subject to recommend the measures to avert the recurrence.