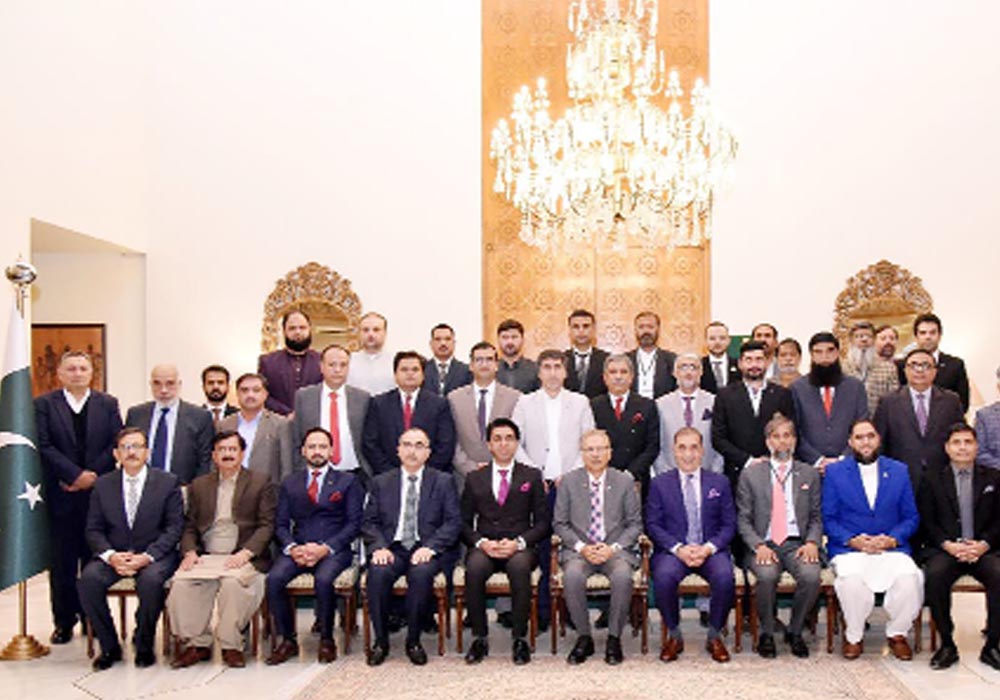 President Arif Alvi Wednesday defended the decision to sign the agreement with the International Monetary Fund (IMF), claiming that it was “likely to help the country resolve its financial and economic difficulties”.

Speaking at the meeting, the president stressed the need for the country’s three main branches needed to work alongside the business community to identify and resolve the issues faced by the nation to ensure political, economic, and financial stability in the country. He also said that those who were predicting the derailment of the political and democratic process needed to be “discouraged wholeheartedly”, and that democracy in the country should be strengthened with each passing day. Speaking on the occasion, the president also commented that signing the agreement with the IMF was “important” and the move would likely help the country resolve its financial and economic difficulties.

They cited political considerations as the primary barrier preventing the topmost government’s decision-makers from taking tough economic measures. If the country goes ahead with the Fund’s programme, Prime Minister Shehbaz Sharif’s government will have to take decisions on tough measures. These include slapping additional taxes of Rs300 to Rs400 billion – mainly through hiking indirect taxes and withholding taxes’ rates – charging consumers the full cost of electricity by increasing the per-unit rate in the range of Rs7.50 and raising the gas tariff by 50% to 60% on immediate basis.

“Frustration has been mounting among top policymakers because they have spelt out strategy, attached cost and its implication in case of non-implementation on IMF’s prescriptions as adjustments cost will further go up with every passing day,” sources told The News on Tuesday.

During the conference, the country’s president echoed the sentiments of the top policymakers and referred to political stability as the most vital element for economic growth. He commented on the fact that Pakistan’s economic situation “necessitated” the holding of general elections to elect a fully representative government, which was empowered to take “critical and difficult decisions” to help the country rise of the issues it was facing on the political, economic and financial fronts.

In response to a query, the president lauded the establishment’s intent to avoid involvement in political affairs and stressed that this was an ideal opportunity to resort to democratic means of resolving the issues faced by the nation. Speaking to the presidents and the representative of the country chambers of commerce, the president stressed the importance of shifting to green energy.

He said that the most significant chunk of the country’s import bill comprised petroleum products used for energy production and transportation. “This cost can be substantially reduced if we adopt an all-encompassing energy, water, and gas conservation strategy, which is implementable and can deliver results with the commitment and support of the business community”.

He also emphasised that shifting businesses and industrial processes to green energy, like solar and wind, would help reduce the import bill while simultaneously protecting the environment.

President Alvi further said that there was no dearth of ideas in Pakistan. However, a communication gap existed between decision-making authorities, target populations, and agencies responsible for their implementation.

Citing the measures taken by the Imran-led government during the COVID-19 pandemic, the president highlighted the importance of the political parties working in tandem and said: “Through the coordinated efforts of all the stakeholders, we were able to defeat the pandemic in an effective manner as compared to regional as well as other countries of the world. “By adopting a similar approach, we can identify the issues confronted by the nation on all fronts, find consensus-based and fully sold-out solutions, and implement them with full commitment in an efficient and proactive manner.”

During the session, the president also addressed the matter of women’s involvement in business and instructed the women’s chambers of commerce to provide leadership to women entrepreneurs to assist them in securing loans from the banks to start and set up their own businesses. “Although the banks had promised 100% disbursement of loans to all the women applying for loans, unfortunately only 5% of the loans set out had been availed,” he noted, asking the women’s chambers of commerce to act as beacons for women who wanted to secure loans to promote their businesses.

Underscoring the importance of the cottage industry in the country – which has expanded to include gemstone and diamond processing, chip design, and other sophisticated fields – the president emphasised the need to utilise the skill training programs launched by Meta to help women gain marketable skills and sell their products and services online. During the meeting, the president drew the attention of the business community to five key areas of importance.

These include the provision of a harassment-free work environment to women; inclusion of differently-abled persons, who made up about 10% of the population; the role of the business community in reducing mental health issues, which stands at a shocking 24% in Pakistan; reduction of the mortality rate due to breast cancer; and bringing out-of-school children into the school system.