Alvi invites US to benefit from Pakistan’s economic zones 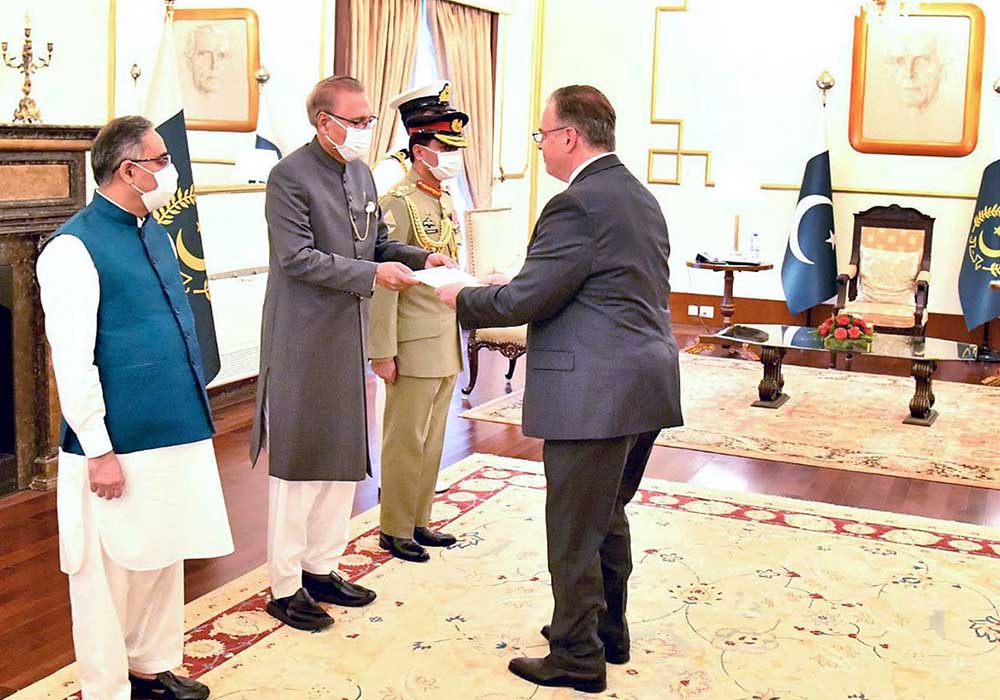 The newly appointed envoys of the United States, Turkey, Australia, European Union (EU), Bhutan, and Sudan presented their credentials to President Dr. Arif Alvi in a ceremony here at the Aiwan-e-Sadr.

Talking to the US ambassador, the president emphasised that a constructive and sustained engagement between the two countries on the principles of mutual respect and mutual interest was vital to promote peace, development and security in the region.

He said that this year would mark the 75th anniversary of the establishment of Pak-US diplomatic ties which would be celebrated befittingly.

The president noted that there had been a healthy momentum of engagement between Pakistan and the US through dialogues on the climate change, health, energy, Trade and Investment Framework Agreement (TIFA).

“We encourage US companies to invest in Pakistan and reap dividends from the lucrative benefits offered by Pakistan’s special economic zones,” he said.

Alvi highlighted that Pakistan was actively involved in engagement with its diaspora in the US in the tech sector and was desirous of more tech sector investments from American companies.

Talking to the Turkish ambassador, the president noted with satisfaction the convergence between the two countries on critical issues, including Kashmir, Northern Cyprus, Islamophobia, and Afghanistan.

He said that both countries would celebrate the 75th anniversary of the establishment of diplomatic relations on November 30.

In a meeting with the Australian high commissioner, the president said that Pakistan offered attractive investment opportunities in different sectors.

He also expressed satisfaction over the ample educational opportunities being offered in Australia for Pakistani students.

Talking to the ambassador of the EU delegation, the president stated that Pakistan valued its relations with the EU and was satisfied that Pak-EU ties were moving in a positive direction in all spheres of coordination.

“Economic and trade ties are the key feature of Pakistan and EU multidimensional relationship,” the president said.

He highlighted that GSP+ had been a mutually beneficial scheme and had played an important role in the expansion of Pak-EU bilateral trade.

He further said that Pakistan saw the GSP+ scheme as a constructive engagement for the betterment of its economy and promoting its economic agenda.

Talking to the Sudanese ambassador, the president appreciated the historically fraternal ties, bilateral cooperation, and coordination at OIC and UN between the two countries.

In a meeting with the non-resident ambassador of Bhutan, the president said that Pakistan took immense pride in its rich Buddhist heritage.

“Pakistan is home to the second most sacred site in Buddhism in Swat, which is the birthplace of Guru Padmasambhava (better known as the Second Buddha),” he highlighted.

The president said that Pakistan would welcome religious tourism from Bhutan, which would help promote people-to-people contact between the two countries.

He reassured the ambassador that Pakistan would continue to assist Bhutan in the development of its human resources by offering courses in Pakistan’s professional institutions.

Alvi congratulated the envoys on their appointments and expressed the hope that they would make efforts to further broaden bilateral relations with Pakistan in different fields.

Separately, Alvi expressed grief over the loss of lives in a traffic accident in Kacchi, Balochistan, and prayed for the early recovery of the injured persons.