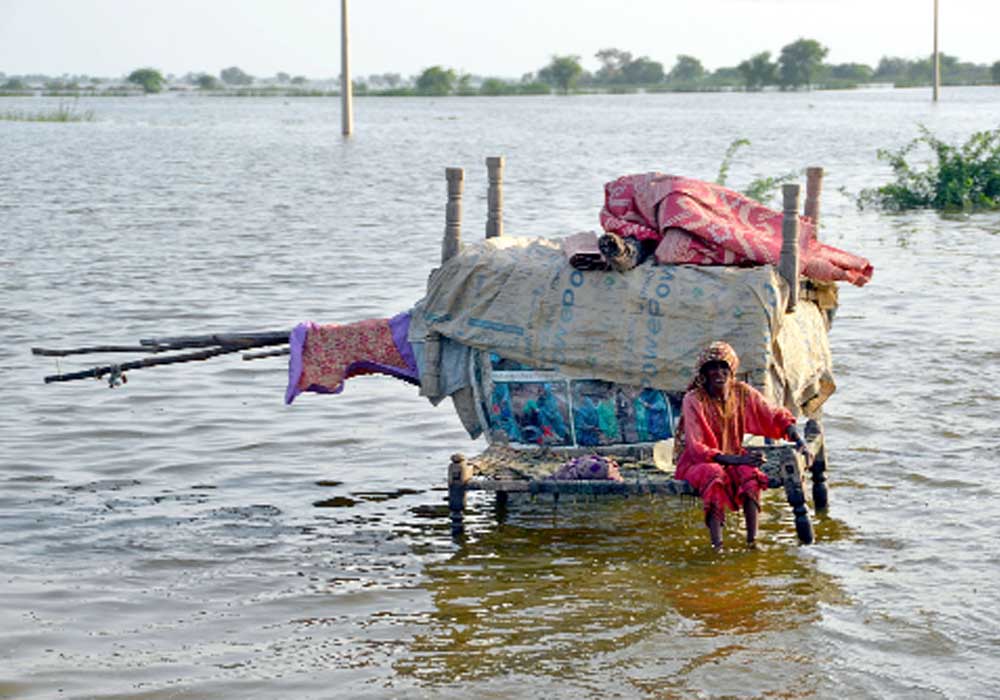 Every time there is a catastrophe in this country, we automatically assume that we Pakistanis are the most sinister people on earth which is why Allah punished us. This narrative is sold to us and we move on ignoring the mismanagement of authorities that actually led to the disasters.

Floods are nothing new in the country. Pakistan had been hit with floods earlier and we have witnessed the destruction on a massive scale. The thing is we learned nothing. Floods in 2010 took over 2,000 lives and caused damage worth 43 billion dollars. It was the tenure of PPP. The whole world supported and sent aid to Pakistan. That flood was a warning for Pakistan to build dams. I did not expect PPP to build the dams quickly. Because we had a massive economic crisis in the country, and we took time to recover. However, in 2013 we recovered. This was the year when PML-N won the elections and ruled the country for the next five years. Throughout their tenure, it was their responsibility to construct the dams. But they didn’t address this issue. They wasted billions of dollars in transport projects but paid no attention to this pressing issue.

Cut to 2018, PTI got selected. Since PTI was very vocal about this issue, people expected PTI to be serious about this. And PTI did try. In collaboration with the Chief justice of Pakistan Saqib Nisar, it introduced a fundraiser for constructing Mohmand Dam and Diamer Bhasha Dam. It was hinted that dialogue to reach a consensus regarding Kalabagh Dam will be started too. Following the announcement, PPP was quick to raise eyebrows about the project. Now PPP is someone who had briefly experienced the effects of floods in 2010, yet it was passionate against the dam. Together, PPP along with certain political parties from KPK opposed the dam. They gave hypothetical reasons against the dam. PPP alleged that Punjab wants to deprive Sindh of water while some parties from KPK alleged that the dam will result in massive floods in the KPK region.

Where are these people today? What will they get to say now? PPP said that the dam would be constructed “over their dead body”. Now the whole province is under water. Will anyone hold PPP accountable for this? ANP vowed to oppose Kalabagh Dam “till their last breath”. Now there is water in KPK everywhere. These parties who passionately opposed the dam must be held accountable for what is happening in the country today.

We cannot simply demonize the whole nation and blame it on God. God didn’t stop you from building dams and managing water. He gave you enough time and capital to do that. A lot of people make mistakes in a lot of countries. India and Israel are brutally suppressing Kashmiris and Palestinians. God didn’t punish them. Western countries are far ahead when it comes to adultery, alcohol consumption and pleasure-seeking, but God didn’t punish them. Why would he punish you then? He didn’t. It is, in fact, the people you voted for who let you down.

PPP and ANP opposed the dam, and if that dam had been constructed, the scale of damage would have been quite low. PMLN didn’t bother about any such project in its entire tenure (and it has absolutely no plans of doing so in the future as well). PTI and their collaborator reaped money from Pakistanis in the name of constructing the dam for a long time and abandoned the project. Will anyone ask Imran Khan about those funds that were collected? Where are those funds? What happened?

We are not suffering because of our sins. We are suffering because we have picked the wrong people. We are paying the price for not telling these people to construct the dam. Now, these people are coming to you for photo sessions. Don’t fall for their promises. They are not going to help you. Grab them by their collar and ask them why they didn’t show any vigilance when there was time. Look them in the eye and tell them that you are not going to vote for them unless the construction of the dam begins. Those who opposed the dam are responsible for this chaos, if they come to you, grab them by the collar and throw them into the same water stream that wrecked your house. Do not forgive these people this time.

To authorities, for God’s sake, when we recover from this, take the construction of these dams seriously. Construct the dam, even over the dead body of these ruthless PPP officials. Construct the dam, no matter how much it bothers ANP. Start the investigation of the Dam fund on PTI. Ask PTI why it is so keen to halt the IMF deal when we are in dire need of money. Do not compromise the interests of this country for these parties.