Another 15 dead as rains wreak havoc in Sindh, Balochistan

Woman among eight die after being electrocuted, struck by lightning in interior Sindh 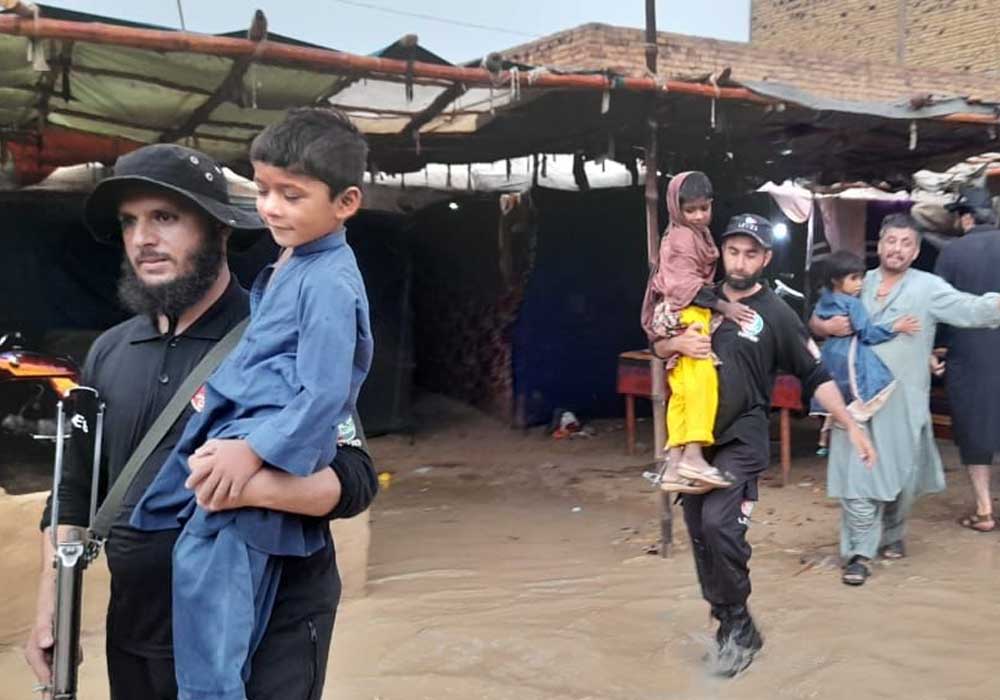 At least 15 casualties were reported on Saturday in parts of Sindh and Balochistan in lightning and rain-related incidents, as continuous downpour wreaked havoc in the two provinces.

Karachi and other areas of Sindh witnessed heavy rainfall coupled with strong winds and thunderstorms on Saturday, increasing fears of urban flooding as the monsoon system across the country has intensified.

According to the Pakistan Meteorological Department (PMD), heavy showers lashed DHA, Clifton, II Chundrigar Road, Ibrahim Hyderi, Korangi, Saddar, Sharae Faisal, Malir, and Stargate after 10am. The monsoon rains flooded the Korangi nullah after which the EBM Causeway was closed for traffic.

Urban flooding was also reported in several localities. In Lyari, streets were inundated with rainwater coming up to the waist stranding people inside their houses. In northern parts of the city, water entered houses creating immense difficulties for residents.

Karachi Administrator Murtaza Wahab tweeted that the “major thrust” of the rain was in city’s District South. He also said teams were on the roads “to handle the situation”.

According to reports, six people were killed in rain-related incidents in Karachi on Friday. The police said three people died after they were electrocuted, while several others got stuck in flooding in nullahs.

Sardar Sarfaraz, chief meteorologist, said the rains were likely to persist in Karachi and other parts of Sindh as there was a strong monsoon system and its currents were penetrating from the Arabia Sea.

In interior parts of the province, eight more people, including a woman, lost their lives in lightning and electrocution incidents. Two men, identified as Abdul Aziz Dal and Khuda Bux Mallah, were killed near Kadhan Town of Badin district on Saturday when they were struck by lightning. A peasant, Dhanji Kolhoi, was also killed when lightning struck him near Nindo Shaher of Badin district. A woman also lost her life in Sanghar district in the similar incident. A boy was electrocuted in Shekhat area of Matyari during rainfall. Lightning also killed 26 goats in a village near Islamkot.

On the other hand, a t least seven people were killed in Balochistan during the last 24 hours, bringing the tally of rain-related deaths in the province since July 1 to 56.

According to the Provincial Disaster Management Authority (PDMA) Balochistan, among the 56 dead during the period, 22 of them were women, 24 children and 10 men.

“As many as 48 people also sustained injuries in the rain-related incidents,” it said, adding that 670 houses also sustained infrastructural damages. The areas, according to the PDMA, that remained most affected included Quetta, Loralai, Sibi, Harnai, Kohlu and Zhob.

According to PDMA officials, rains affected 12 dams across the province, of which three burst due to flooding. In Loralai, six people were swept away by the dam water after which a rescue operation was initiated. Separately, the floods in Pishin and Turbat have entered populated areas, but fortunately, no casualties have been reported so far.

Meanwhile, multiple areas of Quetta have been without electricity for the past four days due to heavy rains. The residents complained that despite several calls, the authorities have failed to restore power.

Balochistan Chief Minister Mir Abdul Quddus Bizenjo directed the PDMA, district administrations and other agencies concerned to stay alert as the authorities have forecast more rain in the upcoming days.

All the agencies should be ready to deal with any kind of situation while remaining diligent and active, he directed, instructing departments to assure the availability of resources for the protection of life and property of residents.

Earlier in the day, Minister for Climate Change Sherry Rehman said that the current monsoon rains have so far claimed dozens of lives across the country. Addressing a news conference in Islamabad, she said this indeed was a national tragedy. She said the most number of deaths had been reported in Balochistan. Also, Sherry said in a tweet that Sindh and Balochistan were going through very high levels of rainfall on a 30-year average.

At least 116 people have reportedly been killed across Pakistan due to incessant rain during the last three weeks. According to official figures, rains claimed the lives of at least 56 people in Balochistan, 22 in Sindh, 18 in Khyber Pakhtunkhwa, 10 in Gilgit-Baltistan, five in Punjab, four in Azad Kashmir and one in Islamabad.