Finance (Supplementary) Bill 2021 passes in NA, drowns opposition's calls for debate on it 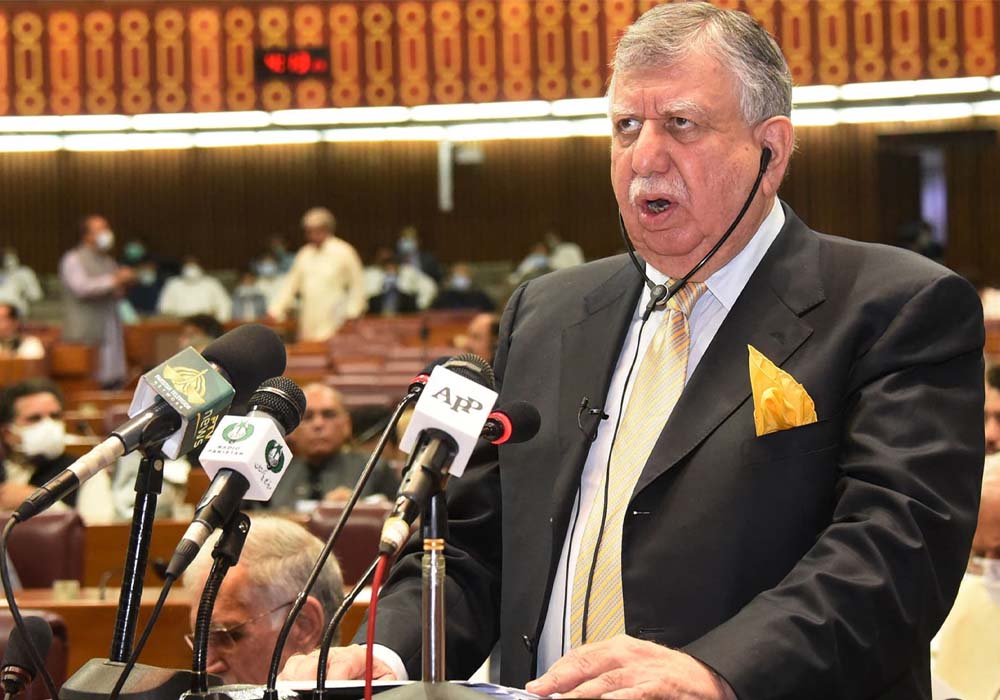 Resentment was nigh amidst the political opposition as well as the general populace after the National Assembly (NA) passed the Finance (Supplementary) Bill 2021, commonly called the ‘mini budget’, in a session spanning hours on Thursday.

The bill has been a controversial one since it was brought to the table in December last year, with the government having deemed it necessary to help Pakistan pass the International Monetary Fund’s (IMF) sixth review of its $6 billion extended Fund Facility.

The NA passed the finance bill as well as the State Bank of Pakistan (Amendment) Bill 2021 on Thursday. The session, chaired by National Assembly Speaker Asad Qaiser, was also attended by Prime Minister Imran Khan.

The bill was passed complete with approval of the government’s amendments, a notable one being that under Clause 3 of the bill, small shops would be tax exempt from the sale of bread, chapattis, sheermal, naans, vermicelli, buns, and rusk, while tier one restaurants and shops would have to pay taxes on these staple items. Moreover, a 200 grams carton of milk would not be subject to general sales tax (GST) but formula milk costing Rs500 or more would have a 17 percent GST on it.

Changes related to taxation of domestic and imported cars were passed as well.

While the government amendments were passed seamlessly, the oppositions recommendations were rejected, which resulted in much ire being directed towards the bill in session.

Pakistan Peoples Party’s (PPP’s) Shazia Marri moved for the bill to be circulated publicly under Rule 123 of the Procedure and Conduct of Business in the National Assembly to demonstrate the will of the people but the motion was opposed by Finance Minister Shaukat Tarin.

Moreover, amidst a call to discuss Senate’s proposals on the bill, Pakistan Muslim League Nawaz’s (PML-N) Ahsan Iqbal said that it was an insult to the Senate that its recommendations were not being deliberated on.

Many of the amendments proposed were rejected through a voice note first and the speaker refused to entertain the request for a physical count of votes. Marri’s proposal, however, was approved for physical recount twice during the session and the results favored the government both times.

Tackling the rejection of the amendments, PPP Chairman Bilawal Bhutto spoke at the session and questioned whether they were turned down just because PPP lawmakers had suggested them. Bhutto, who himself had proposed amendments to the taxation of crude oil and import products, asked whether the finance minister, who had himself said some taxes would be withdrawn, had done so.

Lambasting Tarin, Bhutto furthered that the finance minister told off previous governments for worsening matters despite having served them himself earlier. He insisted Tarin visited Karachi and spoke to people about their economic depravity to see why there was much opposition to the mini budget.

He said that the government never held to its promises and that Naya Pakistan had only delivered rising inflation to the people. Bhutto also jabbed that it was odd to observe the PM in the front row of the treasury, stating that the bill should be debated upon with the opposition.

As the amendments were bulldozed, former PM Shahid Khaqqan Abbasi questioned the need for a mini budget to begin with, saying that the people were being burdened with an unprecedented Rs350 million in taxes, which was a first in the country’s history. He also echoed Bhutto’s position that the bill should be debated.

Iqbal also joined in to request that the lawmakers be allowed to debate the bill for two days. He urged the speaker to not suspend house rules, lest he wished to be recalled in future as “among those conspired to sell the country’s economic sovereignty”.

Lawmakers inside the NA weren’t the only one in furor over the bill’s passage as the citizenry, including political workers, were also agitated at the development.

In this regard, journalist Murtaza Solangi opined on Twitter that Pakistan Tehreek-i-Insaf’s (PTI’s) allies were also accountable for the passing of the “anti-people” bill. He said that the allies’ deceitful “diatribes stood exposed”.

The Allies of Imran Khan, be it MQM, PML-Q or GDA, are responsible for the passage of anti-people mini budget. Their forked tongue diatribes stand exposed.

Similarly, educator Shama Junejo added that if Defence Minister Pervez Khattak truly cared about the people, the bill would not have passed with a burgeoning majority in NA. Junejo had possibly referenced to an earlier row that PTI’s Khattak had with the PM over the budget, in which he expressed reservations about inflation that the bill could reign in.

I just wonder that if Pervez Khattak & Co. really had pain of people then how and why the bills are passed with overwhelming majority?
They all know how to make headlines

Politicians also expressed their displeasure outside the NA. PML-N’s Maiza Hameed Gujjar said that the government was going to trouble the citizens in the name of the mini budget, insisting that people took to the streets in protest.

PPP’s Tahir Mashhadi also offered a scathing critique, stating that the bill’s approval was a “black day” for Pakistan. He said that PTI’s ally Muttahida Qaumi Movement Pakistan (MQMP) had colluded with the government to befall hardship on the people.

Today is a black day for Pakistan.MQMP with complicit, collision & connivance with it's masters & coalition partners PTI has passed the Mini Budget to wreck unbearable hardship & torture to the suffering people opening floodgates for increase in taxes, utility bills,food stuffs.

Despite vociferous opposition both inside and outside the session, the unpopular bill was passed, with all clauses individually approved in the session.