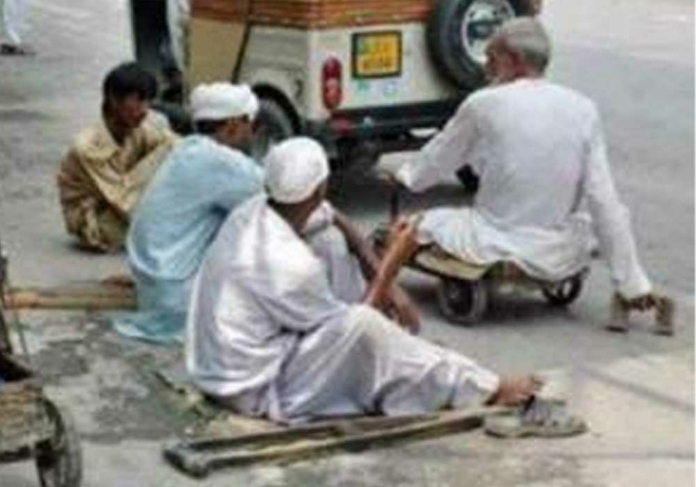 The tough routine at the office kept him busy all day and as he reached back home, his children and wife welcomed him, wearing smiles on their faces, with a simple demand that they would go out to dine somewhere in the city.

“Papa, Chaman Ice cream is my favourite, we have to go there,” Sana, 6, hugged her father, placing a simple demand before him. She was quite excited and was desperately waiting for her father to respond in the affirmative. “Yes, my sweetie, get ready, we’re just leaving,” said Muhammad Irfan, holding the girl child in his arms.  The positive response left the girls rejoicing and she got ready within a few minutes. Women wore light make-up, took their bags and rushed towards their car parked outside in the garage.

The family took hardly half an hour to reach Chaman Ice-cream from National Town, near M.A.O College. As they reached they preferred to stay inside the car instead of going out and sitting at any table at the eatery. A waiter, who was already standing there, warmly welcomed them. “What would you like? Vanilla, Kulfa, Mango, Pistachio. There are many flavours,” asked the waiter, as the family rolled down the window.

“I’ll like Kulfa,” Sadia, 9, said, excitedly. Sana said she would like the chocolate flavour Ice-cream while Irfan and Samina placed an order of Vanilla each. After taking orders, the waiter returned with a larger tray. The children happily inclined to get their cups. Before devouring their favourite “chow”, they had no idea what would happen with their excitement for Ice-cream.

As they held their cups from the waiter’s tray, a beggar suddenly popped up.

“Khuda K leya mjy bhe Ice-cream le den. Mjy bhe yeah pasand hey,” [for God sake, let me have a cup of Ice-cream. I also like it], a child wrapped in ragged clothes begged the family.

The children sitting in the rear seat got dimmed as they saw a child beggar right next to their window and they felt as if they were losing their ice cream taste. The enjoyment, within no seconds, disappeared for the whole family when the child put his demand before them. Irfan, who was leading the family, immediately called the waiter and asked him to provide him with a cup of ice cream in a bid that they could enjoy their moment.

But this effort lived short as another beggar came and she said “I’m hungry. Give something for God’s sake.” Both the children who begged were hardly 10 to 14 years old. The incessant demands forced the family to flee from there.

This is not just one incident. Every day you can see hundreds of such beggars around the eateries in cities who would just pop up from nowhere right after you have placed your order for food. Sometimes they demand money or now they have started asking for the same food that you have ordered. Sharing your food with a needy and deserving person is a good deed but you cannot differentiate between a needy and a professional beggar on the busy streets.  The official data shows that 3, 781 professional beggars have been arrested this year including 3,618 men and 150 women who hit every street and corner of the city to beg. The data reveals that around 13 suspects involved in the abetment of beggars were also arrested by the police this year.

Flocks of beggars are observed day and night in all big markets and signal points of the city roads which tease the commuters and those who intend to go to markets for shopping or to enjoy food. The sources say that there are certain cartels who are working behind beggars. “As many as 354 professional beggars have been arrested during the last month of October,” said the sources, privy to the development.

They state that they arrested 349 men and five women who had pretended to be beggars but they were actually not.

A study, Beggarization: Beggary as an organized crime in Pakistan” shows that there are multiple factors associated with begging, children under the age of 18 years are increasingly getting involved in begging which is currently on the rise in Lahore city. It established that most of the kids who are begging in the streets the form of selling balloons, books, flowers or cleaning mirrors of cars are also called an indirect form of begging.

The city in the last few years also witnessed an exodus of gypsy families who are largely dependent on professional begging and can be seen living in makeshift tent houses near roads, empty plots and a few main markets of the city.

It was also observed in the city that there are many people who are doing petty jobs and earning less money often seem to have involved their kids in indirect begging which involves begging in the name of selling small items like pencils, tissue papers, or masks. Their kids are their huge sources of income who can earn around Rs 1,000 to Rs 2,000 per day besides food and other donations they receive from the people.

According to Waseem Abbas, Spokesperson of the Child Protection and Welfare Bureau (CPWB), the kids could not go on roads begging without the support of their family members or parents. Although there are few cases, he says, where kids were involved in begging without the parent’s knowledge, those cases were very few in number.

Abbas says since January 1st till September 30th, the CPWB has rescued 7,627 kids involved in direct begging or indirect form of begging which includes cleaning the mirrors of cars, selling masks, books and other small items.

He further says after rescuing kids involved in beggary, CPBW presents them in the courts which send them to CPWB, or releases them against the surety bonds of their parents. “If the courts grant legal custody to the CPWB, the bureau has a well-equipped centre where education, food and stay are provided to the kids under the age of 18,” he adds.

The Spokesperson says that most parents are the handlers of these street kids who get involved in beggary, these kids are their earning and income sources too. Most of them, he points out, are not encouraged by their families to stop begging and are likewise not willing for rehabilitation.

The citizens say that whenever they use any ATM machine in any big market they see beggars standing there and begging them.  Tea stalls, tourist points and many other places including the small markets all are full of beggars including the young women who are seen chasing the people.

“I feel ashamed whenever I come out of the office or home to any market and have an encounter with the beggars,” says Aqeela, who works in a salon in the Gulberg area. She questions as to why the state authorities failed to make any effective mechanism to control organized begging. “They are growing,” she concludes.