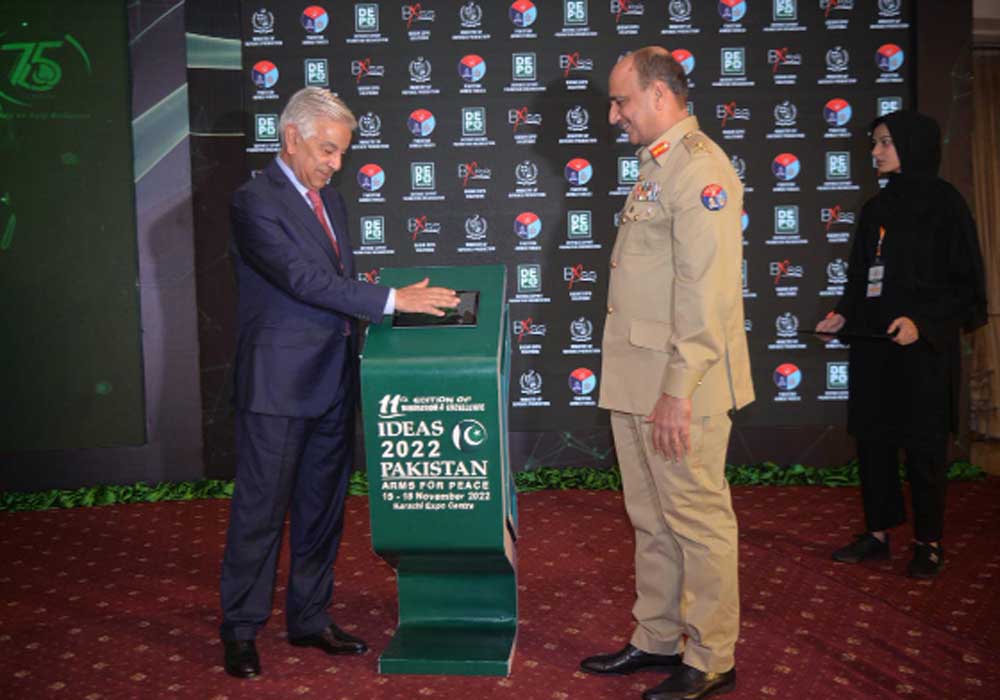 Minister for Defence Khawaja Muhammad Asif on Thursday said the holding of International Defence Exhibition and Seminar (IDEAS-2022) was the reflection of Pakistan’s consistent efforts to galvanise industrial activities for the production of defence equipment through collaboration and joint ventures in addition to indigenous production.

The minister delivered these remarks in his keynote address as the chief guest at the soft launch of ‘IDEAS-2022 Pakistan – Arms for Peace’ to be held at the Karachi Expo Centre from November 15-18 which is the 11th edition of international defence exhibition. Civil and military officials and members of the diplomatic fraternity attended the soft launch.

Asif said the exhibition has grown in scope and stature in the span of 22 years and he was satisfied with Pakistan’s achievements in the relatively new ground.

“Over the years, IDEAS has become a great meeting place for defence exhibitors. This IDEAS rendezvous provides an excellent opportunity to develop better understanding and friendship network in defence industry for trade and joint ventures,” he said.

He added that it also provided a platform for seeking affordable solutions to meet the challenges faced by the defence industry.

“I am proud of the progress made by IDEAS, which is evident by THE overwhelming participation of traders, exhibitors, delegates and visitors in the last exhibition held in 2018.”

The defence minister reaffirmed that the country harboured no aggressive designs against any state but was determined to defend its territorial integrity and safeguard its sovereignty.

He said the armed forces of Pakistan were battle=hardened and known for their professionalism world over. “Our contribution to the UN peacekeeping missions and our performance around the globe is the clear manifestation of the devotion to duty and professional skills.”

“The motto the exhibition also highlighted our commitment to the international community for peace and harmony.”

“Pakistan will continue to develop its military potential that guarantees peace with honour and dignity. Towards this end, we have been able to develop sophisticated weapons and equipment indigenously.. Besides meeting domestic requirements, our defence products are now gaining market shares in the international level as well.”

“I see a great potential in our defence industry to export its products on competitive basis through responsible arms trade. Having overcome the effects of unprecedented and devastating Covid-19 pandemic, which affected the whole world; we are back in business with renewed zeal and enthusiasm.”

In his welcome remarks, Defence Export Promotion Organization (DEPO) Director General Major General Arif Malik said the first IDEAS was organised in 2000 and over the past two decades it had steadily grown in space, volume, exhibitors and foreign delegates.

IDEAS 2018 witnessed a record participation of 524 exhibitors, 231 delegates representing 44 countries, he said, adding, “The opportunity to accelerate IDEAS got affected when the 2020 exhibition was rescheduled due to the pandemic.”

Despite a gap of four years, he said it had received over 70% booking of available space till now and it would be the largest exhibition of its history.

“We are also in the process to extend invitations to defence delegations of around 85 countries and expect to receive a positive response.”

He said that the exhibition was aimed at increasing space for joint cooperation between Pakistan’s public and private enterprises with their regional and international partners and it also meant to enhance possibilities of public and private partnerships providing an opportunity in the realm of defence production.

DEPO Director Coordination Brig Naveed Azam Cheema gave a brief presentation on DEPO’s history and its journey over the past two decades.  He also presented a short documentary on the overview of the upcoming IDEAS 2022 and DEPO’s journey of success.

A special commemorative postage stamp highlighting the successful journey of IDEAS 11th edition and 75th year of country’s independence was launched on the occasion where the DEPO DG presented the stamp to the defence minister. Later, the minister of defence launched the IDEAS-2022 through the digital kiosk where the DG presented a souvenir to him.