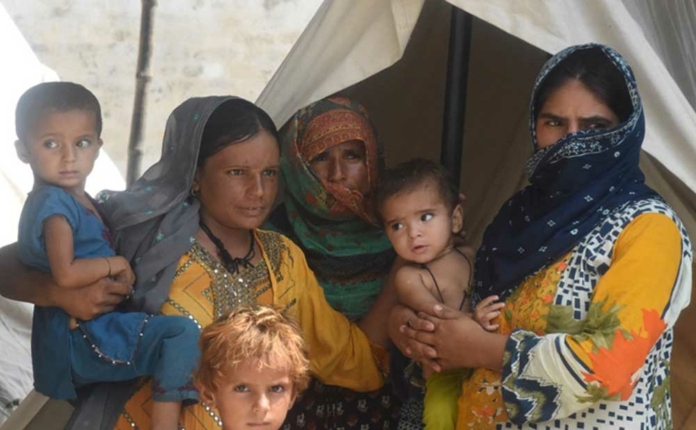 The National Flood Response Coordination Centre (NFRCC) on Friday said there was no
shortage of food items in the country, as the death toll from devastating floods since June 14 crossed the 1,600 mark.

An intense and long monsoon dumped around three times as much rain on Pakistan than on average in recent weeks, causing major flooding which killed 1,606 people, including 579 children and 325 women, according to the National Disaster Management Authority (NDMA).

In its daily update, it said that 10 people had lost their lives in flood-affected areas, out of which six hailed from Balochistan and the remaining from Sindh. In addition to that, an outbreak of diseases and viral infections also claimed 17 more lives.

Health officials in Sindh said diseases had so far killed more than 400 flood victims, mostly
children and the elderly. Hundreds of thousands of people displaced by the floods are living in the open and as floodwaters spread over hundreds of kilometres start to recede. The calamity has not just destroyed houses and roads but also crops spread over millions of acres, subsequently creating fears of a food shortage.

In the latest update, Pakistan’s top flood response centre said, “A huge stock of wheat for [the] next six months are available, along with the strategic reserve, which is sufficient till next harvesting season.”

Other than 2 million tonnes of strategic reserves, an import of additional stock of 1.8m tonnes is in progress, out of which 0.6m tonnes had reached, it said. The NFRCC said 46,000 tonnes of wheat from the public sector were being released on a daily basis.
The centre also gave a breakdown of certain crops and food stock.

It said that bumper tomato crops were harvested last year, which were more than sufficient to fulfil the country’s requirements. The NFRCC said a total of 7.5m tonnes of potatoes were harvested when the total requirement was 4.2m tonnes.

The forum said the import of onions and potatoes was in progress from Iran and Afghanistan. “In that regard, the government has directed to wave all duties … however the release/distribution of items is ensured [the] same day at the earliest.”

The country’s rice requirement, the NFRCC said, could be fulfilled easily through available stock until December, adding that the next harvesting season would start in October. In a nutshell, the country has a sufficient stock of food and sustenance items and measures
have been taken to further enhance the capacity, the NFRCC said.

However, talking to the media on the sidelines of the United Nations General Assembly,
Finance Minister Miftah Ismail said that the country may have to import wheat if the crop was not sowed in time.

Meanwhile, at a meeting, Minister for Water Resources Khursheed Shah said he would talk to the prime minister about the deferral of the recovery of agricultural loans to farmers.
Later in the day, Sindh Information Minister Sharjeel Inam Memon said the same in a press
statement.

He promised that steps were being taken to facilitate the farmers. “In order to provide relief to farmers, the Sindh government has fixed the support price of
wheat at Rs4,000 per 40kg for the next year’s crop,” he said, adding that all resources were also being utilised to drain out water from agricultural lands so that farmers could resume sowing for the next year’s crop.