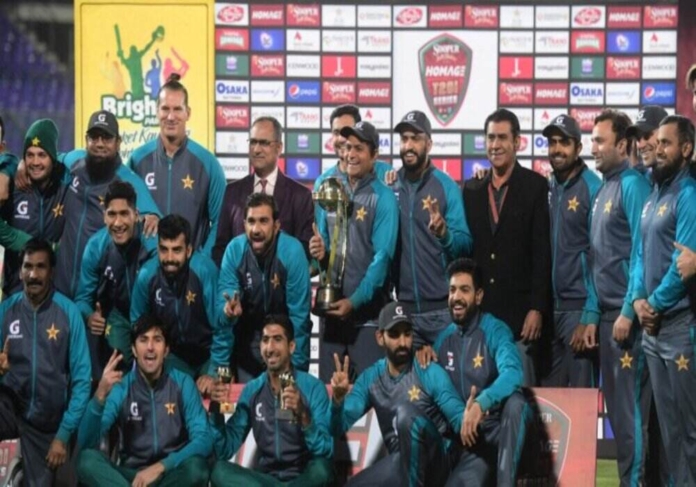 Pakistan’s opening duo of Mohammad Rizwan and skipper Babar Azam put on a 158-run opening partnership to help their team sweep the Windies by 7 wickets.

After captain Nicholas Pooran elected to bat first in the 3rd T20 match at the National Stadium in Karachi, the Windies set Pakistan a 208-run target.

In reply, the openers batted brilliantly and gave the men in green a blistering start to put the Windies bowlers under strain. Babar scored 79 runs off 53 balls, including nine fours and two sixes, while Rizwan scored 87 runs off 45 balls, including 10 fours and three sixes.

It was 16th over when the first Pakistan wicket fell. It was Odean Smith who removed Babar. Dominic Drakes got Rizwan’s scalp in the 18th over.

Fakhar Zaman came to the crease and started hammering Windies bowlers all over the park. But he did not last long when he was caught at long-on by Shamarh Brooks on the ball of Romario Shepherd.

Asif Ali joined the onslaught to make sure that the Windies do not have a sniff. Asif scored 30 off 6 deliveries by hitting 2 sixes and 2 fours to take his side home.

Earlier, Pooran’s half-century propelled the West Indies to a comfortable 207-3 total against Pakistan in the third and final Twenty20 International. The Windies’ choice to bat first paid off, as their openers, Brandon King and Shamarh Brooks, got them off to a terrific start against Pakistani spinners.

Before being sent packing, the openers scored 92 runs, with King hitting 43 runs (seven 4s and two 6s) off 21 balls and Brooks hitting 49 runs (two 4s and four 6s) off 31 balls. Pooran came to the pitch after the openers were dismissed and played an outstanding inning, scoring 64 runs off 37 balls with two fours and six sixes.

Mohammad Wasim took two wickets and Shahnawaz Dahani took one, but as a whole, the Pakistani bowlers failed to impress today.