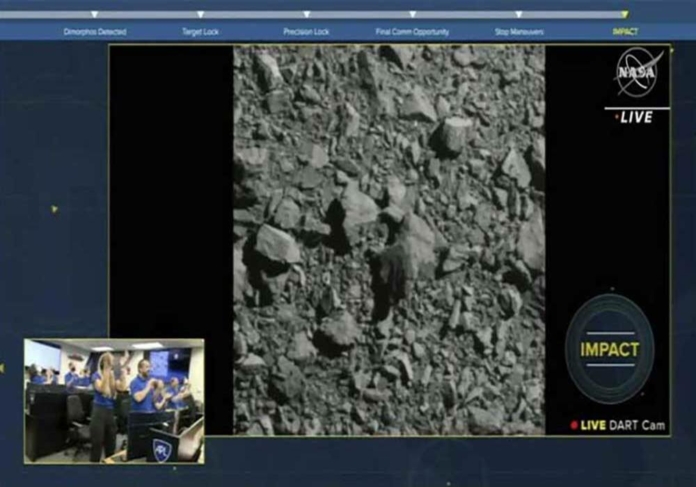 A NASA spacecraft rammed an asteroid at blistering speed Monday in an unprecedented dress rehearsal for the day a killer rock menaces Earth.

The galactic slam occurred at a harmless asteroid 7 million miles (11.3 million kilometers) away, with the spacecraft named Dart plowing into the space rock at 14,000 mph (22,500 kph). Scientists expected the impact to carve out a crater, hurl streams of rocks and dirt into space and, most importantly, alter the asteroid´s orbit.

“We have impact!” Mission Control’s Elena Adams announced, jumping up and down and thrusting her arms skyward.

Telescopes around the world and in space aimed at the same point in the sky to capture the spectacle. Though the impact was immediately obvious – Dart´s radio signal abruptly ceased – it will take as long as a couple of months to determine how much the asteroid´s path was changed.

The $325 million mission was the first attempt to shift the position of an asteroid or any other natural object in space.

“As far as we can tell, our first planetary defence test was a success,” Adams later told a news conference, the room filling with applause. “I think Earthlings should sleep better. Definitely, I will.”

NASA Administrator Bill Nelson reminded people earlier in the day via Twitter that, “No, this is not a movie plot.” He added in a prerecorded video: “We´ve all seen it on movies like “Armageddon,” but the real-life stakes are high.”

Monday´s target: a 525-foot (160-meter) asteroid named Dimorphos. It´s a moonlet of Didymos, Greek for twin, a fast-spinning asteroid five times bigger that flung off the material that formed the junior partner.

The pair have been orbiting the sun for eons without threatening Earth, making them ideal save-the-world test candidates.

With an image beaming back to Earth every second, Adams and other ground controllers in Laurel, Maryland, watched with growing excitement as Dimorphos loomed larger and larger in the field of view alongside its bigger companion. Within minutes, Dimorphos was alone in the pictures; it looked like a giant gray lemon, but with boulders and rubble on the surface. The last image froze on the screen as the radio transmission ended.