Being homeless again after 75 years of partition Narrating the scene of destruction of his haveli in Behlani, septuagenarian Wali Muhammad Buttar started crying bitterly. Named after the daughter of a rich Hindu trader, Behlani falls in Naushahro Feroz — one of the worst flood-affected districts of Sindh.

Wali’s late father purchased the splendid mansion from a local Sindhi when the Punjabi-speaking Jat family of Hisar (city of Indian state Haryana) allotted agricultural land in the area a year after the partition. 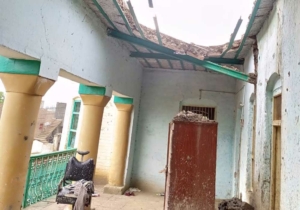 The three-story home originally belonged to some Hindu family. It was among the few pre-partition structures erected in perfect shape before its collapse on Wednesday. Wali does not know the name of the Hindu who had built the home, but he heard from locals that the family moved to India when Wali’s family came to Pakistan during the clashes of partition.

The old man has now taken temporary shelter with his two sons and grandchildren at a neighbour’s home. Flood waters washed away 70 percent of homes in Behlani during the current rains. Wali told Minute Mirror on the phone that he had never seen such floods and rains in his life.

The unprecedented rains created havoc in the entire province. The flood waters destroyed thousands of homes, important buildings, railway tracks and road networks, killing hundreds of people and thousands of cattle, according to initial reports. 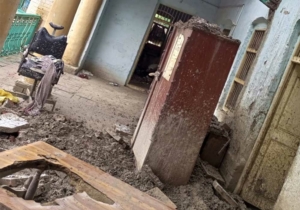 Floods in Sindh, Balochistan and Southern Punjab also destroyed crops on millions of acres, opening the gates of a horrific food crisis for humans and livestock in coming days.

The villagers in Behlani take one meal in a day and have nothing to feed the cows and buffaloes. Being a farmer who always enjoyed wheat bread, Wali eats boiled rice these days. Flour mills (chakis) are closed in the area due to the unavailability of electricity and they are left with ration just for the next two-three days. Floodwaters also took away their crops.

Wali’s two sons are also farmers, having livestock and crops as the only source of living like other millions of families in rural Pakistan. The pain and agony could be clearly felt in his voice when he said he was homeless again after 75 years. 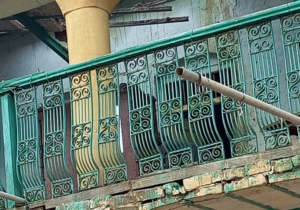 The federal government has announced Rs37.2 billion as cash relief for the flood-stricken people, releasing some Rs5 billion to the National Disaster Management Authority (NDMA) to accelerate the rescue, relief and rehabilitation efforts. The government also promised Rs25,000 cash assistance to the victims in addition to the compensation of Rs1 million for the families of the deceased, and additional support for the people injured and damages to the houses.

Prime Minister Shehbaz Sharif said some Rs80 billion was required for instant relief, pointing out the requirement of hundreds of billions of rupees to overcome the losses, as well as for rehabilitation of the victims. Provincial governments also announced funds for the victims but the money seems like peanuts, considering the extent of the catastrophe.

Mujahid Channa, a volunteer of the Al-Khidmat Foundation — a charity — who also remained engaged in relief activities during the worst floods of 2010, narrated the other side of the problem.

For him, corruption was the major menace which needed to be curbed in government-backed relief programs. “Almost 70 percent of the amount which the governments announce for flood relief goes in the pockets of waderas, (feudal lords) and local district administrations before reaching the victims,” he claimed.

He held the landlords and influentials, who occupied the dedicated water passages in Sindh, responsible for the main destruction. “Independent journalists should visit Sindh to investigate who captured the Kacha areas of River Sindh. Thousands of acres of land is under the occupation of waderas mostly belong to the ruling party [People’s Party] of the province,” Mujahid said.

Feudal lords had built dykes with the state funds to save their crops and they would never allow a breach of barriers during floods, forcing water flow towards residential areas, villages and cities, he claimed, mentioning the Flood Inquiry Commission’s 200-page report of 2010.

The report revealed that the negligence of the Irrigation Departments of Sindh and Balochistan had caused a colossal loss of Rs855 billion to the national economy. It read the encroachments contributed to obstructions in the flow of water resulting in flooding of many areas.

The commission, headed by Muhammad Azam Khan and comprising Fateh Khan Khajjak, A.W Kazi and Kh Zaheer Ahmed, to investigate the damages, submitted the report but its suggestions had never been implemented even after a decade.

In Mujahid’s opinion, the extent of calamity and damages was high even this time, but mismanagement and corruption were almost the same as witnessed in 2010.