Bhutto and Tutu: Two icons who fought for democracy and reconciliation 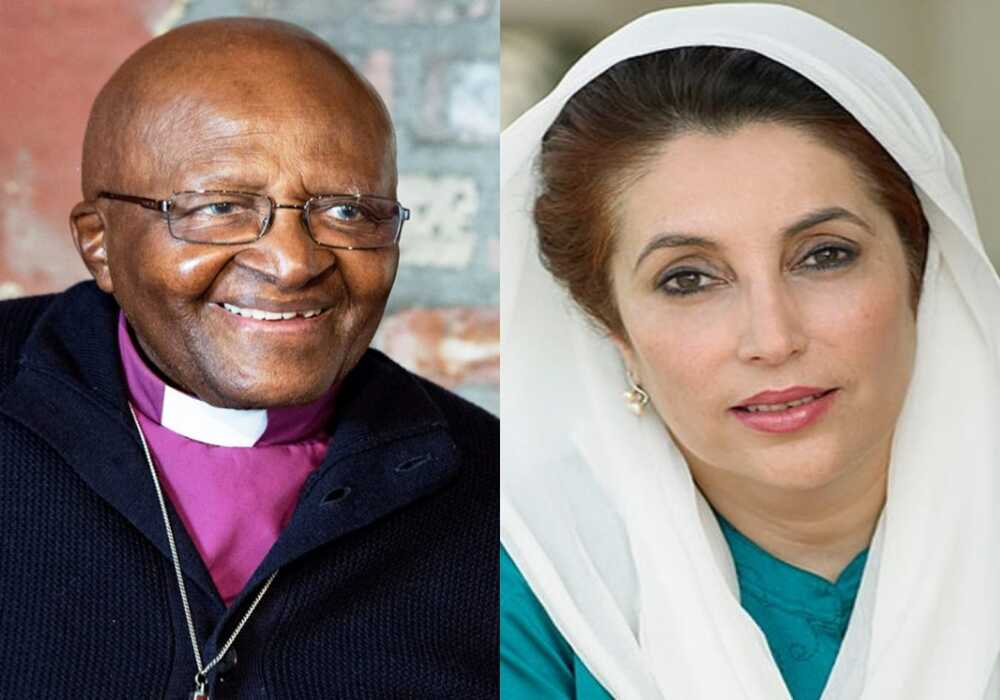 Desmond Tutu, who died on Sunday at 90 laughed as readily as he cried. He always aimed to view the finest in humans, and maybe it was this that compelled him to raise a voice whenever humanity was violated anywhere, anytime.

The inhuman system which dominated his own motherland – apartheid – was a clear insult to his ethical sensibility, and every other obituary and ode to his memory and legacy has of necessity highlighted his spectacular role in eliminating that inequality specially. But he had many other talents as well. As mentioned before, his canvas was global.

Though apartheid was his central concern, he was not the one to hold back. When he was the head of the South African Council of Churches in 1984 – which was also the year he became a Nobel Peace Laureate – he clearly told the UK Prime Minister that hosting the South African prime minister would be a slap in the face of millions of black South Africans who were the daily victims of one of the most vicious policies in the world.

Then in 1988 – the year Benazir Bhutto became prime minister of Pakistan for the first time – as the Archbishop of Cape Town, he was rather more withering in his evaluation of US president Ronald Reagan following the latter’s justification for US businesses in the South African economy. Tutu aptly labeled Reagan’s address as nauseating and ‘the pits’, before saying further that America and the West could go to hell.

Staying with 1988, while contrasting Nazism with apartheid, he called the Western politicos who were against a boycott of South Africa racists. He announced that he didn’t want white people to be destroyed. If one reads what has been written about him these last few days, he has been called the conscience of the world, but the way it was directed keeps being overlooked.

For example, just a year ago, the UK Guardian gave him space to condemn the double standards of the USA’s behavior towards Tel Aviv and urged the future Biden camp to publicly admit Tel Aviv’s  appalling nukes, quoting it as one of the potential causes of the comparative longevity of Tel Aviv’s variant of apartheid than Pretoria’s.

Tutu observed that apartheid was horrific in Pretoria and it was horrific when Tel Aviv practiced its own version of apartheid against the Palestinians, with barriers and a system of unjust policies.

This revelation did not dawn on him last year. He had been a persistent opponent of Tel Aviv’s human rights violations for the past many decades. He had expressed his incomprehension, during a trip to the Holy Land, at how Jews could behave so violently with the Palestinians given their own brutal sufferings in Europe in the period 1930s-1940s.

But there are of course many other facets of his life which are papered over by those who would eulogize him in the present.

Tutu hailed global backing against apartheid, so much so that he announced on one occasion that if Moscow intervenes in Pretoria, it would be welcomed as a messiah. But in the mid-1980s, he had no hesitation about attacking the Soviet government in Kabul at the same time, the US-backed Contras in Managua and Tel Aviv’s bombing of Beirut.

He would be as withering about old comrades, including Robert Mugabe, calling the leader ensconced in Harare as a cartoon figure of an archetypical African dictator, who reacted by describing Tutu as an angry, evil and embittered little bishop.

One could agree that Tutu could be angry and often embittered too; but evil is a representation that must solely plague the foes he made.

Those ultimately numbered the African National Congress (ANC) in its post-1999 avatar. Tutu had encountered Nelson Mandela, post-apartheid South Africa’s first president, and they exchanged letters while the latter was jailed for 27 years; but hugged each other for the first time after Mandela was freed in 1990. They had a unified idea of a novel nation based on reconciliation and not ethnic resentment – and became intimate enough to deride each other’s dress sense openly.

But Tutu was routinely withering in his condemnation of the Thabo Mbeki and Jacob Zuma’s administrations, mostly for their blunders in the quest for social equality that the change to black rule had implied. That was also diffused in the wake of the Truth and Reconciliation Commission that Mandela had asked him to preside over, when its conclusions were countered by both the ex-bulwarks of white hegemony as well as the ANC.

Its legal proceedings would often compel the president to weep. In his 80s, Tutu included LGBT rights and global warming to his portfolio of notable causes, as well as ardently denouncing the American assault on Baghdad and Western imperialism in general.

The humane ethics of the Church of England ‘Arch’ – as he was known by many of his fellow South Africans – was accompanied by an astute wisdom and acerbic tongue. He exemplified for his era someone who will, tragically be ignored by a lot of people who put on a show of grieving over him now.

While we lost Tutu on December 26, Pakistanis in particular and South Asians in general commemorated another tragedy a day later – December 27 – this year to mark the 14th anniversary of the untimely assassination of former Prime Minister Benazir Bhutto. The contrast between Tutu and Bhutto could not be more stark; for the former was born into a poor family while the latter was born in the lap of luxury. Both oversaw earlier tragedies to become the voice of their nations: Tutu functioning under the hideous apartheid system in South Africa which excluded the majority population, while Bhutto taking on the might of Pakistan’s worst military dictatorship right after the traumatic execution of her father, the popularly-elected Prime Minister of Pakistan, Zulfikar Ali Bhutto.

Redemption for both came after the end of the Ziaul Haq dictatorship in Pakistan followed by elections in 1988 in Pakistan, when Bhutto became the first female Prime Minister in not only Pakistan but the Muslim world; and the dismantling of apartheid in South Africa following maiden democratic elections in 1994 in which Mandela was elected as the country’s first black president and the efforts of both Mandela and Tutu bore fruit.

As has been mentioned before, Tutu oversaw a painful reconciliation process between the white minority that had just given up power after decades of dominance and the black majority that had only recently overturned decades of abuse and violence to win power. Tutu’s work led to the slow acceptance of the evils of apartheid and a healing process between the whites and black; though it has not really led to the empowerment of blacks beyond enriching a tiny black elite, almost three decades after the historic elections that swept Mandela to power, amid corruption allegations surrounding the Mbeki and Zuma presidencies, which later led Tutu to stop voting for the ANC altogether.

Bhutto, unlike Tutu, tasted political power two times as prime minister and both times being dismissed owing to corruption allegations. However she, like Tutu, was a person of intense charisma and bravery in a conservative, male-dominated society like Pakistan. So one can say that perhaps just as Tutu faced the immense challenge of morally leading the disempowered blacks in South Africa against decades of disenfranchisement by an entrenched white majority, Bhutto too confronted first the depredations of a fundamentalist dictator and even afterwards as a prime minister and opposition leader, faced huge odds being an outspoken woman in a historically entrenched minority of male-preserved politics in Pakistan.

Like Tutu, Bhutto also talked about reconciliation. In her book Reconciliation, written in 2008, she talked about a twin-reconciliation; that within the world of Islam, and the other between Islam and the West. A couple of years before the book, she had sought political reconciliation with her longtime rival, Nawaz Sharif when she signed the Charter of Democracy vowing to work together with him to oppose the then-military dictator Pervez Musharraf. Perhaps it was also the spirit of reconciliation, which led her to return to Pakistan with a nod from Musharraf. If we look at the current state of Pakistani politics, the reconciliation with her political rivals which Bhutto achieved while she was alive is still bearing fruit, with even the head of a major religious party joining the combined opposition and believing in democratic politics; the best summation of her philosophy is in her words ‘democracy is the best revenge’.

I am tempted to sign off with what Tutu said in his condolence message two days after Bhutto’s assassination:

My colleagues and I express our heartfelt sympathies to the family and followers of Benazir Bhutto, and to Pakistan, the country she loved. We await an international investigation into this shocking crime, which was an attack on us all. Ms. Bhutto’s legacy is best honored by advancing the habits, processes and institutions of true democracy, including a vibrant civil society, an independent judiciary and a free media. With those rights come responsibilities – responsibilities that Ms Bhutto believed all Pakistanis would willingly assume. We share that conviction, for the answer to this loss is not a resort to violence or to oppression. If Pakistan were to collapse into conflict the enemies of peace and human rights will have been victorious. Her memory, and her country deserve better.

Thus, both South Africa and Pakistan are in many ways better off in terms of the consolidation of parliamentary democracy and reconciliation among parties and races of vastly different outlooks, largely as a result of the struggles of Tutu and Bhutto against authoritarianism and dictatorship. Yet, while Tutu led a full life, Bhutto’s was tragically cut short.