Biden called out for hypocritical UNGA address on womenâ€™s rights 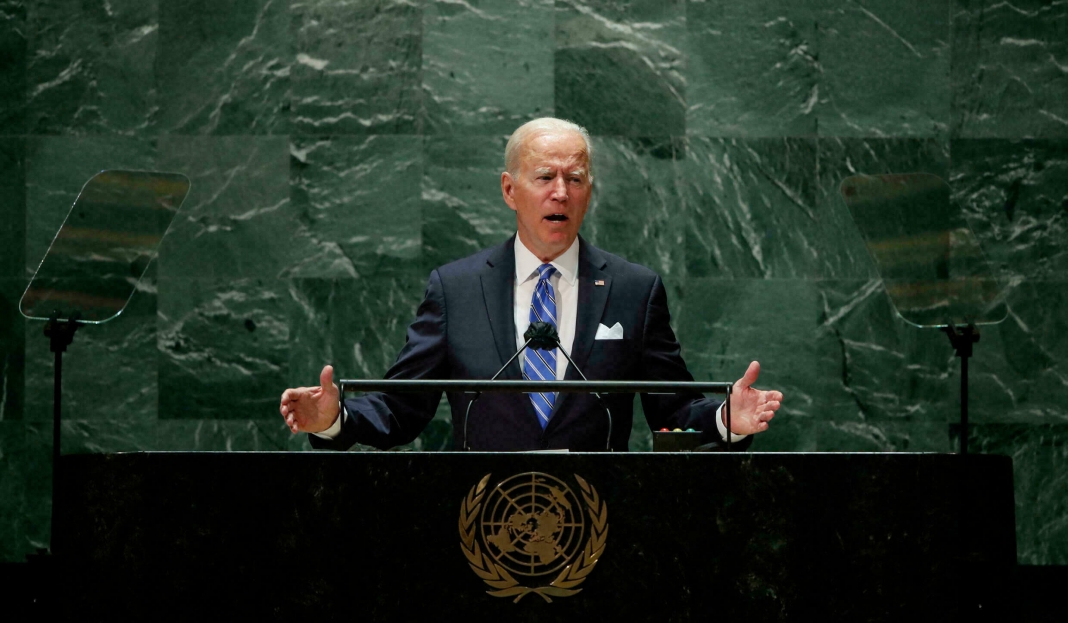 Netizens riled up over US President Joseph Bidenâ€™s hypocrisy after he said nations progressed if they helped womenâ€™s rights flourish instead of stifling them, during his speech at the United National General Assembly (UNGA) on Tuesday.

During the General Debate of the UNGA, Biden said that the â€˜futureâ€™ belonged to nations that did not â€˜trumpleâ€™ the â€˜dignityâ€™ of â€˜their peopleâ€™. In his address, Biden advocated for the â€˜social, economic, and politicalâ€™ rights of women and insisted that everyone worked to help women achieve their dreams and freedom.

Several pointed out that it was hypocritical that Biden would champion for womenâ€™s rights after he left Afghan women behind to the conservative regime of the Taliban. Social worker Meena Gabeena retorted sarcastically and said that Biden advocated for womenâ€™s rights by leaving Afghan women behind with â€˜terroristsâ€™ who historically perpetrated gross violence against them. Gabeena added that this was Bidenâ€™s policy all the while encouraging the same â€˜terroristsâ€™ to give women rights in their country.

We plan to advocate it by installing terrorists on an entire country who stone women,lash them,kill them,stop their education,consider them inferior,stop them from their choice of work,rape them,torture them while we give speeches on how pardoned terrorists shud plz give rights https://t.co/qiOXR0WJ1z

A former business entrepreneur, Zia Wahaj said that Bidenâ€™s policies around US withdrawal were responsible for stripping Afghan women of their rights and freedoms. Wahaj added that the withdrawal made Afghan women more â€˜vulnerable to violence.

Apparently Biden forgot what just happened to the women in Afghanistan.. https://t.co/GSiyAm3CYA

A user was perturbed by Bidenâ€™s otherization of Afghan women and said that there was no â€˜their peopleâ€™ but â€˜the peopleâ€™. They added that power brought with it responsibility that Biden had not exercised by unleashing â€˜terrorâ€™ on the Afghan people.

"Their people". No, Mr Biden, it's "the people". And you just cruelly & brutally forced terror on Afghans who have no less rights, dreams, potential, talents than "your" people. With power comes responsibility.#FreeAfghanistan #Afghanwomen #NationalUprising #Resistance #freedom https://t.co/cmxcAV9z1r

If "trumple" is a transcription typo, it's a damned good one. https://t.co/JVhKOFy0xc

Others chimed in and commented on the validity of the word.

Irony: Urban Dictionary: Trumple
urbandictionary.comhttps://www.urbandictionary.com/define.php?term=Trumple
That racist, sexist, homophobic, xenophobic or any combination of those uncle that you didn't want to see during the holidays. #notmypresident #trampleyouidiot #fakeprez https://t.co/4N9G3i1exz

As users boiled down Bidenâ€™s speech to semantics, a good samaritan offered a definition from Urban Dictionary, which is often used to describe informal terminology or phrases that have been adopted over the years. The user said that â€˜trumpleâ€™ referred to a â€˜racist, xenophobic, or sexist uncleâ€™ that no one wished to engage with over the holidays.

Irony: Urban Dictionary: Trumple
urbandictionary.comhttps://www.urbandictionary.com/define.php?term=Trumple
That racist, sexist, homophobic, xenophobic or any combination of those uncle that you didn't want to see during the holidays. #notmypresident #trampleyouidiot #fakeprez https://t.co/4N9G3i1exz

Bidenâ€™s UNGA speech comes at a time when troubling reports of womenâ€™s rights violations were coming out of Afghanistan. As US forces withdrew from Afghanistan after 20 years of their foreign occupation, several women said Taliban told them to go home from universities and workplaces. Women were also barred from playing sports like cricket and the Afghan womenâ€™s football team also transited through Pakistan to US and Europe to escape Talibanâ€™s rule.

These reports surfaced despite Taliban spokesperson Zabihullah Mujahid having said that women would be a part of society and their right to education and work would be respected if they conformed to Islamic law.