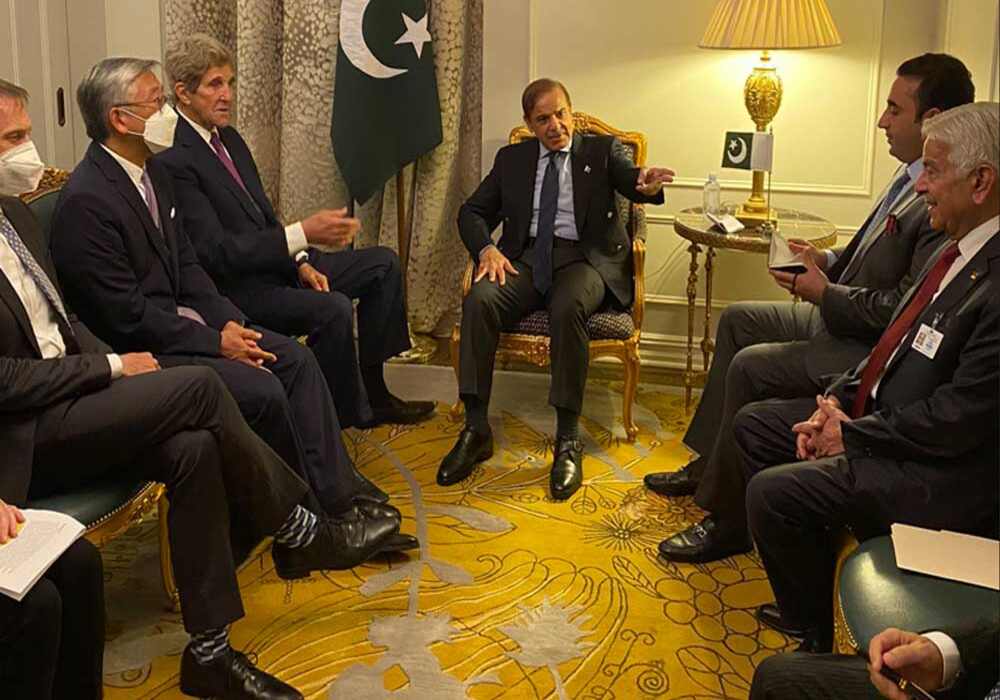 Prime Minister Shehbaz Sharif has emphasized the need for continued support from the international community, not only in the immediate recovery and relief efforts, but also during the subsequent reconstruction and rehabilitation phase.

The prime minister, in a meeting with US Special Presidential Envoy on Climate John Kerry, conveyed gratitude for immediate US assistance in the wake of the devastating floods in Pakistan.

The meeting was held on late Tuesday on the sidelines of the 77th session of the United Nations General Assembly (UNGA) in New York. Noting that “the devastating floods have made Pakistan ground zero of climate change”, the prime minister appreciated John Kerry for raising awareness and seeking solutions to the climate change crisis.

He acknowledged the important role being played by the Biden administration in addressing climate change.

The prime minister stressed that Pakistan contributes less than 1 per cent to global greenhouse gas emissions but it is amongst the 10 most vulnerable countries to climate change. “With over 1,400 casualties and 33 million people displaced as climate refugees, including over 600,000 pregnant women, Pakistan was facing an unprecedented natural disaster.”

The prime minister underscored the role of the US leadership in enabling the developing countries, including Pakistan, to deliver on their climate action commitments under the Paris Agreement by providing sufficient tools in the shape of climate finance, technology transfer and capacity building assistance.

Kerry expressed solidarity with the people and the government of Pakistan in the wake of cataclysmic floods. He said that the US was ready to engage with Pakistan in rebuilding resilient infrastructure as well as other forms of support that would avert such a crisis in future.

“Thank you Secretary-General Antonio Guterres for your strong advocacy of the plight of flood victims and drawing the world’s attention to the most urgent actionable issue of climate change,” he posted on his Twitter handle.

Guterres had highlighted the huge destruction caused by climate change, saying one-third of Pakistan was submerged.

The prime minister said that the world should act together to tackle climate change. He thanked Turkiye’s President Erdogan for highlighting the need for international assistance to Pakistan amid its post-flood problems.

“My brother President Erdogan highlights the need for the continued international assistance to help Pakistan deal with the disastrous flood,” he said in another tweet.

The prime minister also acknowledged the continued support of President Erdogan for the right to self-determination of Kashmiris.

Separately, US President Joe Biden made a fervent call for extending help to flood-hit Pakistan in his speech to the UN General Assembly on Wednesday.

“Pakistan is still under water, needs help,” the president told the 193-member assembly.

In his address, Biden announced over $2.9 billion in new assistance to address global food insecurity.

The compounding impacts of the pandemic, the deepening climate crisis, rising energy and fertilizer costs, and protracted conflicts – including Russia’s invasion of Ukraine – had disrupted global supply chains and dramatically increased global food prices, he said.

“A multi-year drought in the Horn of Africa had created a dire humanitarian emergency, with parts of Somalia at risk of famine for the second time in just over a decade,” he added.

Later, the prime minister met US Secretary of State Anthony Blinken on the sidelines of the UN General Assembly where the latter expressed sympathy for the flood victims. He said that the US will stand by Pakistan in testing time.