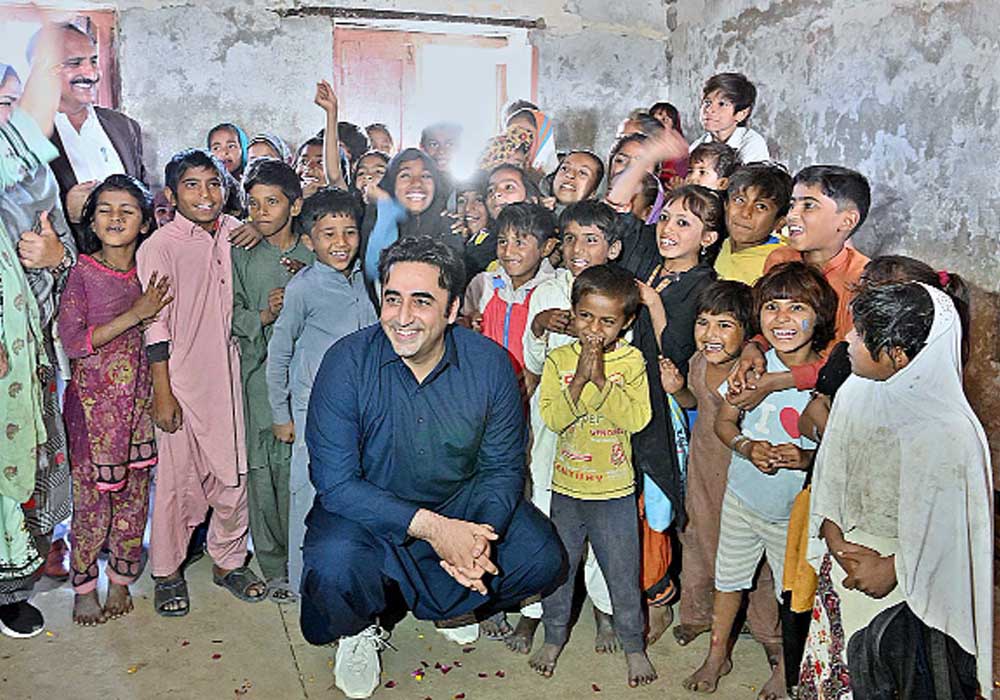 Pakistan People’s Party (PPP) Chairman and Foreign Minister Bilawal Bhutto Zardari on Tuesday said that rehabilitation of flood victims across the country was his mission and he won’t leave the people alone. “We will ensure that we get support from around the world and help people affected by climate change to stand on their feet,” he said. .

Talking to the media after visiting the flood-affected areas of Dadu district, the PPP chairman said that the federal and provincial governments would present the comprehensive plans for the rehabilitation of flood victims to the world at the International Climate Resilience Conference on January 9 at Davos in Geneva, while the Roadshow of Climate Resilience Pakistan would also start from that day. He said that the purpose of his recent visit to the flood-affected areas was that he wanted to convey the message that the flood victims were still facing difficult situations and that they should not be forgotten by the rest of the world.

He said that this flood in the country was catastrophic as the whole world from the United Nations to the meetings in Sharm El-Sheikh in Egypt knew that one-third of the land in Pakistan had been submerged in floodwater. “There is no such example anywhere that one-third of the country was drowned” he said and added that it was a situation like the doomsday before the doomsday. “There is still floodwater in some areas of Sindh and Balochistan” he admitted.

Chairman Bilawal Bhutto Zardari said that after the flood, a crisis had arisen in every sector including agriculture, and the health infrastructure had been badly damaged. Educational infrastructure was damaged as only in Sindh, 50% of educational institutions had been destroyed. He said that due to paucity of resources it would take time to complete the flood recovery mission. He stressed that they had to ensure rehabilitation work not only in Sindh but also in Khyber Pakhtunkhwa, Balochistan, Punjab and Gilgit-Baltistan.

In response to a question asked by a journalist, the PPP chairman said that Imran Khan had many aspirations, but he had failed at every opportunity. He said that by taking out long march twice, he was thinking that elections would be held soon, but his stubbornness was not fulfilled. He said that Imran Khan’s politics was harming the country, the nation, and himself. He further said that even though they were in the opposition, they had supported the government during the COVID-19 epidemic. ‘So today the opposition should take the economic crisis seriously and support the government, come to the parliament and play their role, he said.

Bilawal Bhutto Zardari, in response to the question about MQM, said that there had been differences between his party and the MQM and there will be differences in the future also, but they should try to work together. He said that they wanted to follow the agreement with the MQM, they were ready to sit and discuss the issues. He emphasized that they would make the system of local bodies as stronger as possible, but the delay in the local body elections affected the administrative affairs. Despite the completion of the first phase of the local government elections before the floods, the successful candidates are yet to take their oath of office. If they take the oath they could help their people in the flood-affected areas, he said.

In response to another question, the Foreign Minister said that they had raised their voices even when decisions were being taken against the national security. “We did what the whole world could not do in Afghanistan together” he observed. “We wiped out the terrorists from Waziristan, Swat and Karachi” Bilawal added. He said that after winning the war, it was decided that the facilitators of the terrorists would be released without asking anything. He said that Tehreek-e-Taliban Afghanistan was a reality, while Tehreek-e-Taliban Pakistan was a temptation. He said that Imran Khan made a statement on TV that they had brought the Taliban here. Imran Khan compromised on the blood of the martyrs, who called us imported was importing terrorism. “Today PTI representatives are paying extortion to the Taliban and I will not forgive the terrorists, neither the government nor the nation is ready to forgive,” he added.

Bilawal also appreciated the hard work and efforts of government officials and other staff during the floods adding that their armed forces also actively participated in the relief activities. The foreign minister expressed his sincere gratitude to the United Nations Secretary-General and various institutions, individuals, and countries, including the United Arab Emirates, for their assistance to the flood victims and appealed that the flood victims still needed their assistance currently.