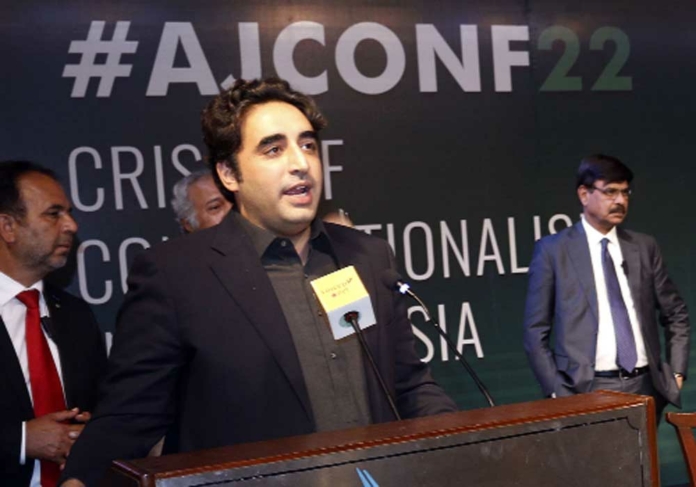 Pakistan People’s Party (PPP) Chairman Bilawal Bhutto Zardari Sunday said that former prime minister Imran Khan was ousted through a democratic process and not with the support of the establishment.

Addressing the concluding session of the Asma Jahangir conference in Lahore, the foreign minister of Pakistan said that there is only one legitimate way to remove a prime minister and that is the no confidence motion.

“For the first time in the history of Pakistan, the Pakistan Democratic Movement (PDM) sent a ‘selected’ PM packing through a democratic process,” Bilawal said amid massive sloganeering of the audience.

“Previously, the prime minister were removed, exiled and executed on the directives of the establishment, but we used a democratic way by tabling a no-confidence vote against Imran Khan, which was succeeded,” he said, adding: We hope that a democratic process will be followed in the future too to remove any PM.”

Criticizing Imran Khan, Bilawal alleged that the Pakistan Tehreek-e-Insaf chief launched a “suicide attack” on Pakistan’s economy during his tenure.

“We paid the political cost but saved the economy of Pakistan and steered the country out of crisis,” said Bilawal.

In a veiled yet apparent reference to Imran Khan, Bilawal urged the youth to understand the issues facing the country and not become part of “propaganda being spread by an arrogant and selfish person, who wanted to destroy the country for his politics”.

The Pakistan People’s Party (PPP) chairman further said that after saving the country from default, the next challenged the government faced was catastrophic floods. “The country had not seen such a catastrophe. All provinces were badly affected by floods. Some areas in Sindh and Balochistan are still inundated,” he added.

“Our core issue now should be the rehabilitation of flood victims instead of politics,” Bilawal said. He said that political clashes would continue but now was the time to help flood victims by joining hands.

He went on to say that people were bearing the brunt of climate change, and added that the coalition government would work to improve the agricultural and irrigation system for a better future.

“We are all responsible for the prevailing crises and now it is our duty to work collectively to rectify mistakes,” said Abbasi.

He added that the appointment of army chief and top court judges should not be made controversial.

“The core issue is economy but no one talks about it,” Abbasi said. He urged all stakeholders, including politicians, army generals, judges, media and businessmen to sit together to bring Pakistan out of the prevailing crises.

“Come out of such discussions that who will become the next army chief. Just think about the country,” the former prime minister said. “Why does the chief justice of Pakistan want to elevate a junior judge?” Abbasi questioned.

Senator Afrasiab Khattak of the Awami National Party said that the situation in Balochistan is very bad and “our political leadership must sit together to find a solution.

“It seems that the country is still facing martial law,” Khattak said while urging politicians not to make legislation which grants extension to generals.

“Free and fair elections are mandatory to ensure a true democratic process,” she said. The session was moderated by Munizee Jahangir, daughter of renowned lawyer and human rights activist Asma Jahangir.