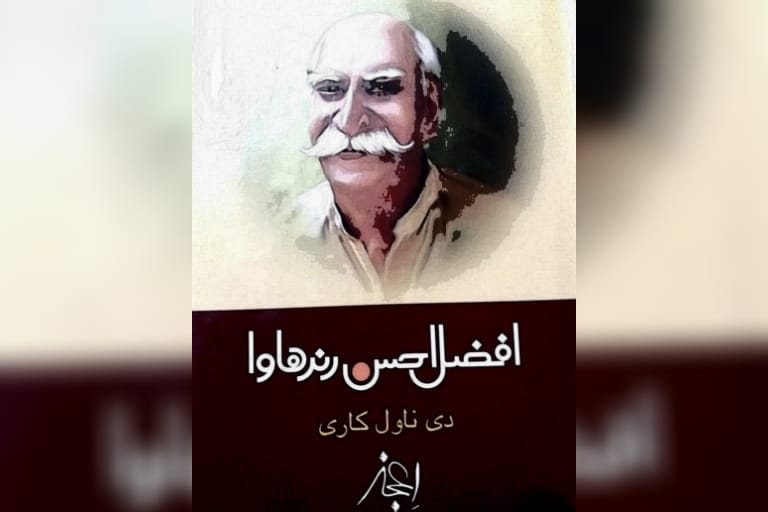 The first thing that comes to mind after seeing him or finding his portrait on the covers of his books is that he might have been a soorma or a Titan from the land of five rivers, Punjab. He had a noteworthy physique; tall, well built, complete with thick, handle-bar moustaches. A strapping Punjabi Jutt who could scare his rivals with his sheer force and chivalry, he seemed to be a formidable presence. He was a different sort of warrior – one who worked wonders with a powerful pen that could conjure up vivid and unforgettable tales of the land of the five rivers in his mother tongue, Punjabi. He was Afzal Ahsan Randhawa, who has without a doubt been the most important fiction writer of Punjab (both sides of the province). Randhawa remains unrivalled in his wizardry as he breathed in the very ambience that he later turned immortal with his Midas touch. Randhawa closely saw the rural and rustic locale of Punjab and later chronicled it for posterity. Due to his firsthand experiences of the idyllic village culture, his novels are still considered to be trailblazers in Punjabi fiction.

Ijaz Ali who likes to call himself ‘Ijaz’ has made a name for himself as a fiction writer, poet, and critic of Punjabi language. He has to his credit more than ten books so far in different genres of Punjabi literature and many more books are in the pipeline. Ijaz dove deep into Randhawa’s immaculate art and has come up with a remarkable book titled Afzal Ahsan Randhawa Dee Novelkari, which was published by Punjabi Markaz, Lahore in 2020. In the Punjabi language book, Ijaz has tried to refresh Randhawa’s fiction works and it’s quite heartening to note that someone from the younger generation has done the job. He has done the job well as he has amply discussed Randhawa’s novels as well his other literary pursuits.

Randhawa was born in Hussainpura, Amritsar on July 27, 1935. His father was a police inspector who served in many cities but originally belonged to a village near Narowal. The novelist was schooled in both Narowal and Lahore and graduated from Murray College, Sialkot. After that, he moved to Lahore to get a degree in law from Punjab University. Later, he joined Agriculture University, Faisalabad and after a few years of service, he quit to start his private practice as a lawyer and was elected vice president of the Faisalabad Bar Association. He was elected as a member of the national assembly from Faisalabad after the elections of 1970 and was a close associate of former prime minister Zulfiqar Ali Bhutto. In the following regime of president General Zia ul Haq, he faced lots of state restrictions due to his stance and was put under house arrest in 1981. He wrote poetry and criticism and translated world fiction into Punjabi and kept enriching it till his last breath. He passed away on September 18, 2017, and was buried in Faisalabad, which was his hometown for decades.

Deewa Te Darya was Randhawa’s first novel, which put him onto the literary map with a bang. The novel was translated in multiple languages. He wrote a few more novels; Doaba (1981), Soorajgrehan (1984), and Pandh (2001) and four shot story collections – one of them called Run Talwar Te Ghora that gained utmost popularity. Randhawa also wrote Punjabi poetry, and his eight collections of verse are proof of his fertile mind. Randhawa told stories of chivalrous village folk who could be lethal in love as well as hate. They could kill and die for the sake of honor. They were fond of the lush green locale of Punjab as well as the untamed wild horses and mares and could stealthily go to their foes’ territory to meet their beloveds by risking their lives. The well-built Jutts were lovable, passionate, chivalrous, and vengefully lethal at the same time.

There is every reason to celebrate Randhawa’s eternal works, as well as the fact that the new generation seems interested in analyzing his works afresh. One hopes that Ijaz would find time to focus on Randhawa’s short stories also and reevaluate their relevance for today. There is also a need to acquaint readers with Randhawa’s poetry and one day, somebody would surely like to tread on that path.

If you are interested in Punjabi fiction’s best, you need to peruse Randhawa’s works. You can pick up Ijaz’s book to learn about the phenomenon of Afzal Ahsan Randhawa.