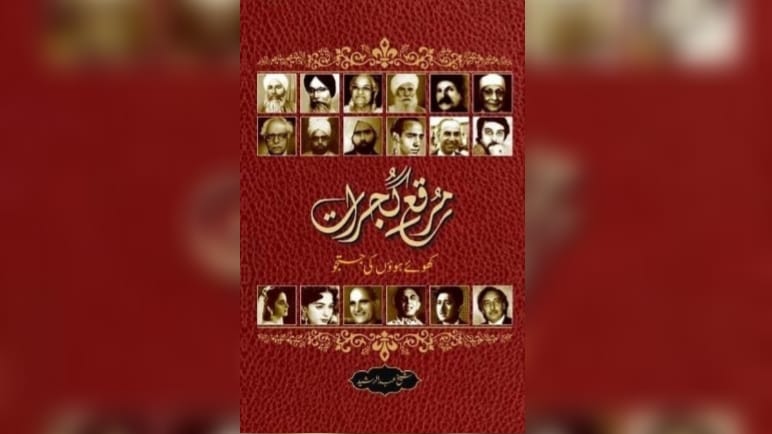 Muraqqa-e-Gujrat: Khoye Howon Ki Justaju is a journey into the past. It reminds you of the days long gone and revives memories of a few people from that era. As the title itself suggests, the book deals with certain renowned people produced by the fertile land by the side of Chenab, Gujrat. Sheikh Abdul Rashid, the author of the book may not be a prolific writer but has to his name, a reasonable collection of books and regularly contributes articles to many dailies, Urdu magazines and websites. He has been heading the public relations department at the University of Gujrat for quite some time now and has written articles on multiple famous people from his native city (Gujrat) to pay tribute to the great men. Now, he has compiled all these pieces into one single book titled Muraqqa-e-Gujrat.

In the book’s introduction, Rashid says that he collected these articles on the insistence of his friends as his works were scattered in different magazines and local newspapers. These articles, he admits, were written in the past and may be lacking in adequate research and have other glitches, but the idea behind the compilation of these articles was to create awareness about the notable people of Gujrat.

Sheikh Abdul Rashid starts the book by presenting Gujrat’s history by quoting historians. Although the essay is short, it tries to highlight Gujrat’s history through the ages. After the brief introduction, the author introduces us to various personalities that his city produced. He has written about forty-two people in the book and has divided them into various categories for the readers’ benefit.  The first category deals with the religious and spiritual people, both popular and the lesser-known ones. Saeen Kanwan Wali Sarkar, for example, was a famous saint of Gujrat whose short life sketch has been written tersely by the author. But there are other important names as well that he has chosen to write on. One of them is Khwaja Fard Faqeer, an 18th century Punjabi poet, theologian, and saint. According to the author, Fard Faqeer’s life is still shrouded in a bit of mystery as very little is available on him. There are researchers who, according to Rashid, claim that he was born in 1720 and died in 1790. Fard Faqeer wrote in different genres of Punjabi poetry and there is a need to probe further into his life. Giani Chet Singh, another important Gujrati, was at the forefront of Sikh religious movements in the 20th century. The author has written a piece on the son of Gujrat who had to abandon his home town in 1947. Apart from these, Sunder Singh Labana and Baba Prem Singh Labana did a lot of work in the field of education and their main contribution was establishing schools for the impoverished in the society. Another great son of the soil was Nawab Sir Fazal Ali, the founder of Zamindar College Gujrat, which served as a beacon of light for the Muslims and non-Muslims alike of the area. Sir Fazal Ali was known as the Sir Syed of Gujrat due to his meritorious services. The essay on him is a sterling piece of writing as it gives a detailed introduction to the great savior of the city. A brief piece has been written on a 17th century great Persian poet, Ghaneemat Kunjahi whose towering stature should have been talked about at length though. One wishes that the author had devoted more pages to this genius poet.

The category of artists is adorned with some top-notch names like the film hero Ejaz Durrani, theater genius Rafi Pirzada, alluring heroine Sabiha Khanum and folk singer Inayat Husain Bhatti. There is a lovely piece on a lyricist and dialogue-writer named Rajinder Krishan who won great fame in the Indian film industry as he left Gujrat in 1947. Prakash Tandon, acclaimed author and business executive, also gets space in the book as his family lived in the main city of Gujrat. They left the area in the wake of partition and won huge encomium for his book Punjabi Century.

The author has written about forty people, and he has shown magnanimity for remembering the people from Hindu and Sikh communities whose roots were in Gujrat. As mentioned earlier, the author gathered the pieces from different sources and some of them are very short. He may have missed a few important people like Pir Fazal Gujrati, a great Punjabi poet and Akbar Ali MA, a great rationalist writer who guided a lot of young people with his scientific approach. Nonetheless, Rashid has done a good job in documenting the intellectual and cultural history of his city.