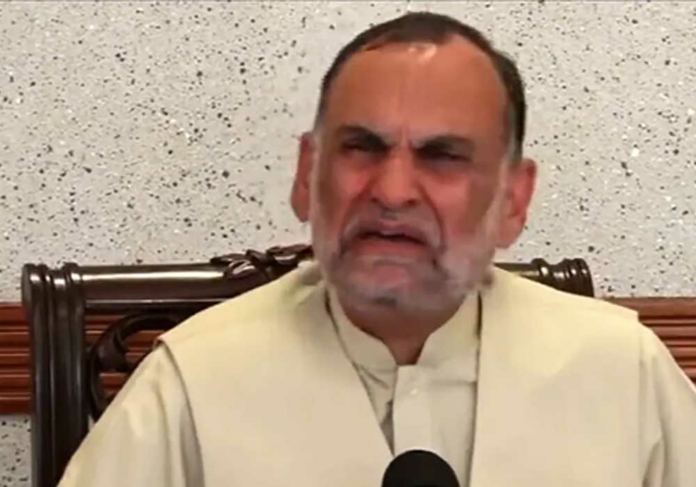 The Supreme Court (SC) on Sunday issued a rebuttal and denied that PTI Senator Azam Swati stayed at its judicial lodges in Quetta in the wake of his claim that an objectionable video from his stay there was sent to his wife.

A day ago, Swati burst into tears before the media, saying that his wife had received a video featuring him and her and about which he could not share further details because the “daughters of my country are listening”. The senator had blamed the interior minister and two military officers for conspiring against him and said they should be held accountable if something happened to him.

He had said that his daughter had told him that the video was from when Swati and his wife had visited Quetta. Recalling that visit, the senator said Senate Chairperson Sadiq Sanjrani had made arrangements for them to stay at the Supreme Court’s judicial lodges in Quetta. The development was widely condemned from across the political aisle. Responding to Swati’s claims, a press release from the apex court clarified that the senator “never used/stayed in Supreme Court Judges Rest House at Quetta”, adding that according to the Balochistan Special Branch, the PTI leader had stayed at the Balochistan Judicial Academy (Judicial Complex Quetta), which was not under the apex court’s control.

Soon after, PTI leader Fawad Chaudhry appeared to mock the apex court’s statement, saying it was an attempt by the registrar to placate the judges about the security of their lodges.

Meanwhile, the Senate chairman comprised a special committee of 14 senators to probe the matter. The notification from the Senate Secretariat said the committee would present its report within 30 days after its first meeting.

The committee included a single PTI senator, Mohsin Aziz. Hours later, a press release from the Balochistan Judicial Academy said that since September 2019, the academy was functioning in an old building on Anscomb Road for “academic purposes without any having any facility of accommodation”. It added that prior to September 2019, it was functioning in two rooms and one hall in Balochistan University Law College on a rental basis, saying that even at that time it did not have any accommodation or rest house facility.

“The report of Balochistan Special Branch with regard to Balochistan Judicial Academy is misconceived and baseless,” the press release reads. Talking on Swati’s issue during a press conference in Lahore, PTI Chairman Imran Khan termed the matter as the “most shameful thing in the country’s history”. He said the incident had “shocked the nation” and called on Chief Justice of Pakistan Umar Ata Bandial to ensure a full investigation on the matter.

“The usual suspects who are trying to cover this up and my assassination attempt are saying it’s a fake video,” he said, adding that Swati had told him he would be staging a sit-in protest outside the apex court and demanding justice for himself. Imran said PTI senators would be with Swati as well and called on lawyer organisations for their support too.