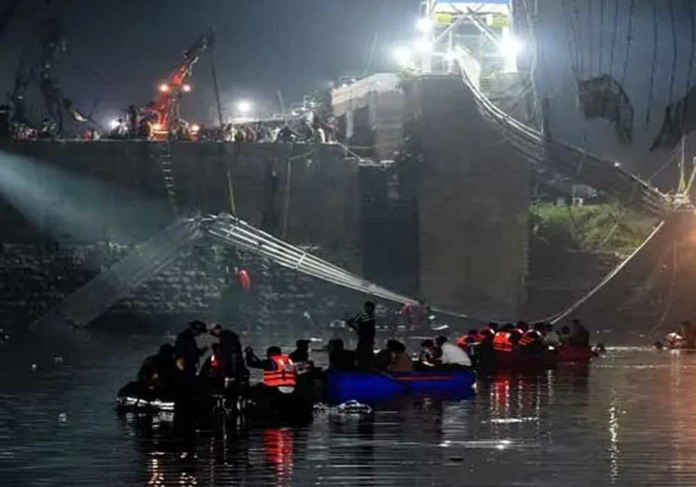 A crowded pedestrian bridge over the Machhu River in Morbi, Western Gujarat India collapsed on Sunday, plunging people into the river below and resulting in the death of 141 people.

According to the Anadolu agency report, Devendrasinh Jadeja, a senior fire department official in the Morbi district confirmed that the death toll has reached 141.
“The rescue operation is still ongoing,” he said.

The British-era bridge collapsed just a week after renovation.

According to preliminary reports, 132 people were killed in the incident, according to Gujarat Home Minister Harsh Sanghavi. He stated at a press conference that the incident is being investigated by a high-level team of officials.

As per a senior official, NK Muchhar armed forces personnel, as well as national disaster management and emergency teams from neighbouring districts, were deployed to locate missing people and assist with rescue efforts.

According to NDTV, around 500 people were on the bridge when it collapsed on Sunday evening.

Prime Minister Narendra Modi said on Sunday that he had also discussed the incident with Gujarat’s chief minister.

“He has requested the immediate mobilization of rescue teams. He has requested that the situation is closely and continuously monitored and that all possible assistance be extended to those affected “Modi’s office announced the news on Twitter.

The bridge was a popular destination for visitors during the Diwali and Chhath Puja holidays.