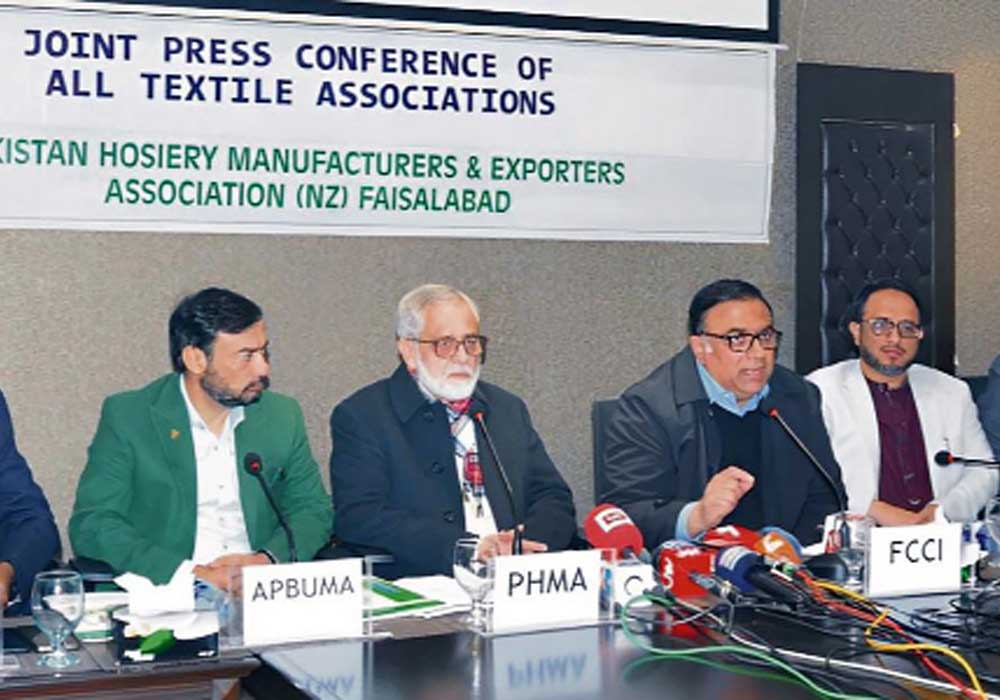 The current government has placed the import of the textile sector at the third level. If the import of raw materials is not allowed, the exporters will not be able to fulfil their orders. “Exporters should be allowed to import 35% value of raw material against 100% value of export because without the import of raw material, we cannot export,” these views were expressed by Muhammad Amjad Khawaja, Senior Vice Chairman of Pakistan Hosiery Manufacturers and Exporters Association (North Zone) and Faisalabad Chamber of Commerce President Dr. Khurram Tariq while holding a press conference.

Arif Ihsan Malik APBUMA, Waheed Khaliq Ramey Power Loom Owners Association, Chaudhry Muhammad Nawaz and Chaudhry Ijaz Ahmad Nagra Power Loom Association, Hafiz Muhammad Asghar APTPMA, Mian Kashif Zia and other industrialists were also present. Muhammad Amjad Khawaja, referring to the circular of SBP, said that the present government has placed the import of the textile sector at the third level, if the import of raw material is not allowed, the exporters will not be able to fulfill their orders. The economy will improve only when the wheel of the industry runs.

Dr. Khurram Tariq, President Faisalabad Chamber of Commerce and Industry (FCCI) said that the main problem of our country is the imbalance of payments. In exchange of 100% value of export, exporters should be allowed to import raw material equal to 35% value because without import of raw material we cannot export. He said that putting the burden of line losses and recovery of any DISCO on the customers of other DISCOs is excessive. The government has completely failed to solve these problems and the country’s economy is on the verge of collapse due to the clear difference in the exchange rate of the dollar.

Arif Ehsan Malik, former chairman of APBUMA, said that the government must seriously consider our problems and solve all the problems of the textile sector soon. He said that we do not have any political agenda but we want to strengthen the sinking economy by increasing domestic exports and it is important that all stakeholders are taken into confidence.

Hafiz Muhammad Asghar Chairman APTPMA said that all institutions of Pakistan prefer to collect taxes instead of solving the country’s problems. He said that due to the poor policies of the present government, 50% of our industry has closed down, and if the situation continues, soon the entire industry will be closed, which will put not only the workers but also the factory owners on the streets.

Chaudhry Ejaz Nagra Chairman Power Looms Associations said that the industry is on the brink of collapse and all stakeholders should call for a peaceful protest soon in mutual consultation. Waheed Khaliq Ramey, Chairman Power Loomowners Association, said that our industry is also close to closure if the present government does not reduce the electricity rates, not only the workers but also the owners will be on the streets. Mian Kashif Zia, former chairman PHMA, said that refunds of sales tax of exporters should be paid immediately so that the financial difficulties of exporters can be reduced. He said that due to non-opening of LC, we are facing embarrassment in front of buyers in the international market.