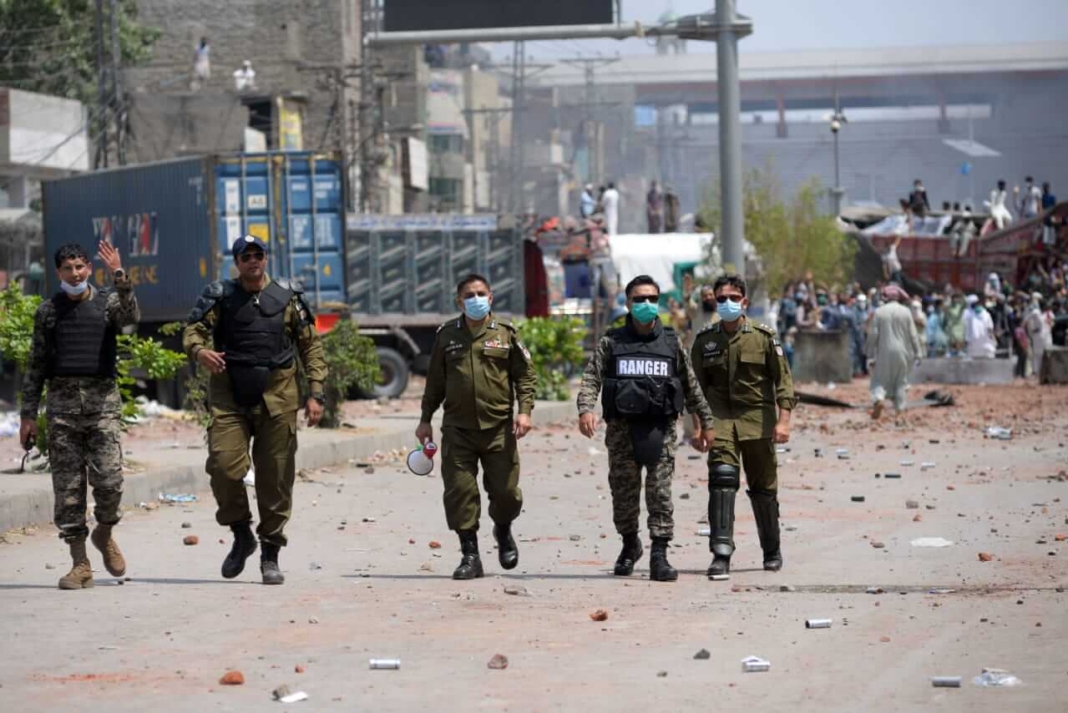 Federal Interior Minister Fawad Chaudhry has said that the government will annihilate the banned outfit Tehreek-e-Labbaik Pakistan (TLP) like all other terror groups in Pakistan â€“ a statement that has been applauded, albeit skeptically.

In a press conference on Wednesday, Chaudhry said that no one had the audacity to â€˜blackmailâ€™ the state and that the TLP would be treated like a â€˜militant partyâ€™ instead of a political one. He added that several security personnel were martyred because of the ongoing TLP protests. The PTI minister said that the shift in stance towards TLP came about because of a meeting headed by Prime Minister Imran Khan with military and intelligence agencies.

Former senator Farhatullah Babar appreciated the governmentâ€™s fresh stance and suggested that TLPâ€™s â€˜patronsâ€™ being investigated would be a good start. Babar added that pictures of TLPâ€™s 2017 protest may help in this regard.

Good that TLP is to be treated as a militant organisation. If the government means what it claims it must begin by investigating its patrons. Looking up at the pictures of TLP dharna in Faizabad in 2017 might help

Middle East and North Africa (MENA) analyst Ravale Mohydin applauded the government for calling TLP a militant organization as was their true essence. She said that TLP had no interest in a prosperous Pakistan and that the state should be above all.

So proud of the @PTIofficial government for calling the #TLP what it is: a militant group that has no interest in a prosperous, inclusive #Pakistan there is no need to drag this drama on further – the State must be above all

Brookings Foreign Policy Fellow Madiha Afzal said that years of appeasing TLP led to violent clashes between them and security forces, but it appeared that the government was finally â€˜putting its foot downâ€™.

The government finally appears to be putting its foot down, but given the TLPâ€™s size and support, it is not going to be easy to quash.https://t.co/Sepgu7uYQN

A user compared Chaudhryâ€™s commitment to getting rid of TLP to that of the Federal Interior Minister Sheikh Rasheed. He said that Rasheed was a â€˜cowardâ€™ who left Pakistan in the middle of TLPâ€™s protests, furthering that TLP should be treated like a â€˜terrorist organizationâ€™.

Full support to Fawad Chaudhry.Sheikh rasheed is a coward who ran away from pakistan and surrenderd whole country to terrorist organization.TLP should be treated as a terrorsit organizationhttps://t.co/J8oyLHBQCb

One user suggested that bank accounts of TLP members should be banned with haste.

If TLP is a militant organisation, should it not be offered amnesty and offices in Islamabad?

While many supported the government, others were bothered by the shaky stances and the delayed action. A â€˜concerned citizenâ€™, Musadaq Zulqarnain, wondered why the government couldnâ€™t have a solid stance on such groups, adding that the â€˜nurturingâ€™ of such elements made the country suffer time and time again.

Why can't our state & govt have a clear view? Appeasement (& nurturing) of such elements has landed the country in one ditch after the other.
Govt decides to treat TLP as militant outfit https://t.co/oJirDPsQx2

The news also drew the attention of global spectators. Asia Program Deputy Director Michael Kugelman said that Pakistan had announced a landmark shift in approach towards TLP, which could reap both short term gains and detrimental long-term impacts. He furthered that a â€˜military assaultâ€™ could agitate the radical elements, thereby enhancing empathy for it. Kugelman said that TLPâ€™s ideological base had to be shaken as much as the group itself.

Pakistan has announced a big policy shift-it has designated TLP as a militant group & vowed to target it militarily. Itâ€™s even compared it to al-Qaeda. This shift from appease to assault could pay off in the near term but also potentially bring dangerous longer term consequences.

In the middle of supporters and skeptics, journalist Salman Masood described the trajectory of TLPâ€™s relationship with the government. He said that TLP was treated like a â€˜proscribed groupâ€™ before a â€˜militant partyâ€™. Earlier, it was treated like a â€˜political partyâ€™, said Masood, adding that before that it was dealt with as â€˜one of our ownâ€™.