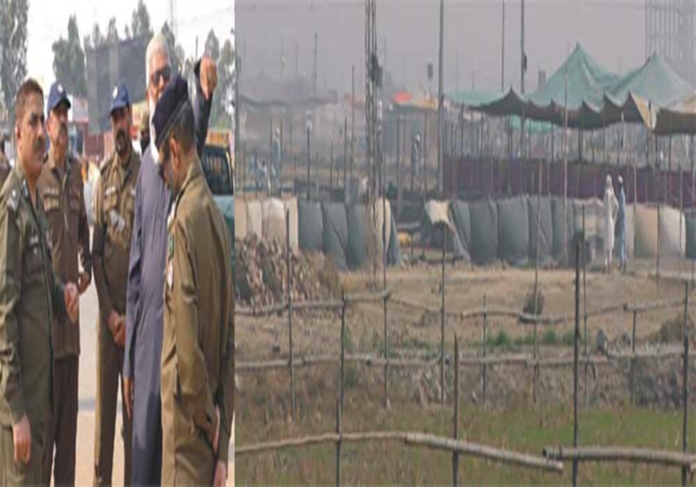 Capital City Police Officer (CCPO) Lahore Additional IG Ghulam Mahmood Dogar visited the location of International religious congregation of Raiwind, on Tuesday to review the security arrangements made by Lahore police. DIG Operations Lahore Afzaal Ahmad Kausar, SSP Operations Sohaib Ashraf, SP Security Sayed Aziz, SP of Sadar division, SP Traffic and other senior officers accompanied him. The CCPO Lahore inspected main area, temporary residential areas, parking stands, police pickets and duty points of the deployed police officers and officials. He also met with the organizers of the congregation and discussed the security arrangements. CCPO said at present, the most important assignment of Lahore Police is to provide foolproof security to the Raiwind Congregation and all out efforts have been made to provide maximum protection to the participants of this sacred event in coordination with different departments including City District Government and organizers of the event. He also informed the organizers that Lahore Police has chalked out a comprehensive security plan for the annual Congregation (Tableeghi Ijtima) of Raiwind to be observed from 3rd November. More than two thousand five hundred Police officers and officials have been deputed on security duty at Tableeghi Ijtima. SP Sadar Division Hamza Aman Ullah and SP Security Sayed Aziz briefed the CCPO Lahore about security arrangements whereas SP Traffic Asif Siddique informed him regarding the traffic arrangements. Ghulam Mahmood Dogar said the participants would be allowed to enter the congregation only after their complete checking through three layer security mechanism of Lahore Police. Police officials in plain dresses have also been deputed at the congregation to keep an eye on each and every movement and any possible suspects. Search and sweep operations have been conducted on regular basis at and around Raiwind Congregation (Tableeghi Ijtima) areas to ensure safety of participants and foil nefarious designs of anti-social elements. He said data of the citizens and passengers in the particular areas has been checked at houses, hotels, guest houses, bus stops and railway stations through Geo fencing, biometric verification and Hotel Eye app as well, he added. Checking of the citizens and vehicles at Exit and Entrance points of the city has been enhanced through e police gadgets. Parking arrangements have been made separately for the facilitation of the participants of the congregation and more than 800 traffic officers and officials have been deputed, SP Traffic briefed. He further informed that seven parking stands have been made at congregation with five Break Downs and 20 fork lifters also deputed for smooth flow of traffic. Police desks have also been setup for any guidance and help at different points of the Raiwind Congregation, the CCPO Lahore concluded.