City chokes on smog with no respite 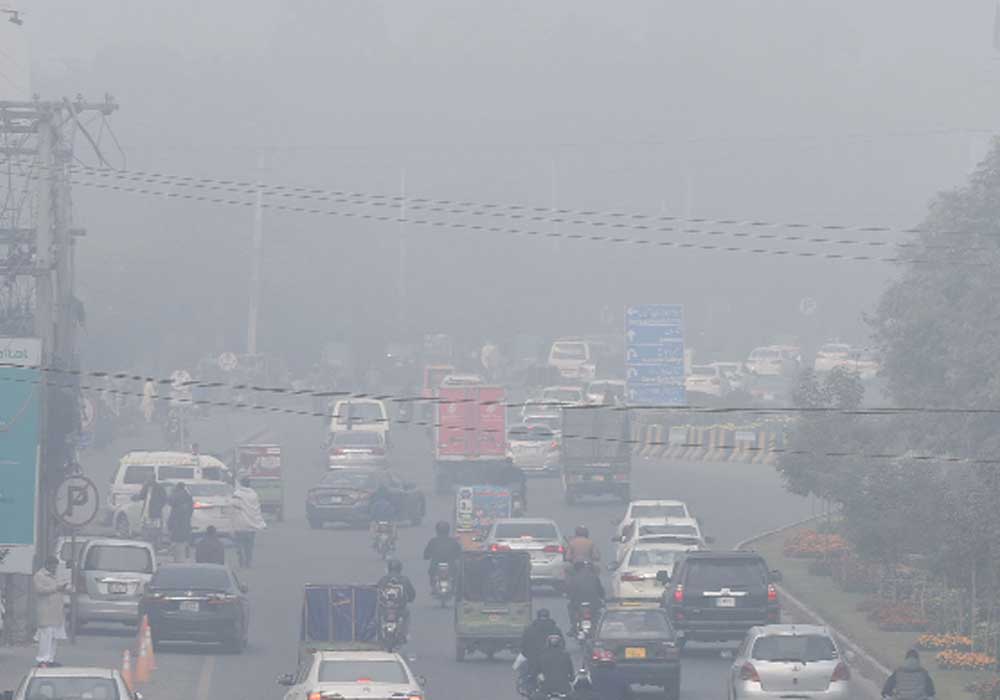 As the city areas remain covered by a thick layer of smog, even the Environmental Emergency imposed in Lahore could not do much good for the residents as almost all areas of the city remained under smog cover most of the time.

During the week ending this Sunday, the provincial metropolis witnessed thick clouds of smog covering heritage monuments, tall buildings and residential areas with the sun appearing just for a couple of hours. With over a hundred thousand people dying every year due to air pollution in the country, the recent phase of smog was exposing more and more people to health hazards by inhaling Co, Co2, sulphur and ammonia gases emitted by vehicles and industrial units.

The city’s air index was badly affected over the time due to massive tree cutting and erasing green areas for constructing housing societies and industrial units. Burning of crops residue and brick kilns emissions is another phenomenon adding to air pollution. Although the provincial government has imposed Environmental Emergency in the city by banning crops residue burning, shifting brick kilns to zigzag technology, raising anti-smog squad to check vehicular and industrial emissions and closing schools three days a week, yet desired results are still awaited.

“Globally ambient air quality standards for sulphur dioxides, nitrogens and carbon emissions have been produced for protection against air pollution,” remarked an environmental expert, Professor Dr. Ijaz Bhatti. “SO2 is of great importance for being used globally as an indicator for a group of gaseous Sulfur Oxides (SOx).” Farooq Baig, another environmentalist mentioned that with the help of some local entrepreneurs, construction of a 25-foot solar-powered “smog tower” was on cards that will filter clean air for about 95,000 residents in its vicinity.

He hoped the project would provide some relief to residents in the worst smog-hit areas. “But, it was not a long term solution as even a dozen smog towers would be insufficient for this mega city.” “We need to change our overall lifestyle, fuels usage mechanism and strict monitoring of farmers, brick kiln owners, vehicles and industries and penalizing those polluting the environment,” he said. The city’s air quality level that sometimes brings Lahore atop the most polluted cities list, it worries citizens especially the mothers of junior classes students.

“We are worried about health of our children. This unending smog is really a nuisance,” said 45 years old Maryam, a scary mother in Daroghawala area. “No matter that we all are responsible for this situation. But now the time has come to strictly implement respective laws sparing no one and penalizing polluters across the board whatever the position or post,” she stressed. “How long we can see our children coughing with inflamed eyes, soaring throats and headache,” she said. “It is too much. Authorities must go for an action no matter it is me or any influential politician, industrialist or a bureaucrat.”

“We see more and more patients coming to hospitals during the smog season. This phenomenon not only create health hazards for people but also exert extra financial burden on poor people,” Dr Kashir said. Amidst complaints by different segments of society on air pollution, Punjab Environmental Protection Department (PEPD) officials claim that air pollution level in the city was within the permissible limits of Air Quality Standards.

“We have seen significant outcome of measures taken by the government,” said PEPD Director Nasim-Ur-Reman. “Air Quality Index has visibly improved during last few days.” He also mentioned to regular checking of smoke emitting vehicles and industries by anti-smog squads. “We have nine anti-smog squads working across city and so far 586 smoke-emitting industrial units have been sealed imposing a fine of Rs34 million.”

Nasim said the farmers were being provided modern harvester “Hepper Seed” to destroy crop residues instead of its open burning. “We are also ensuring conversion of brick kilns to zigzag technology. Farmers and brick kiln owners, violating environmental laws have also been fined.” He also claimed that air pollution level recorded at different locations in the city showed downward trend to 130 on Air Quality Index (AQI) that is moderate and below the permissible pollution level.

Nasim said the Punjab government has also directed ethanol manufacturing units to document their current status regarding installation of wastewater treatment plants to treat effluent in compliance of Punjab Environment Quality Standards (PEQS). Despite the claims of PEPD, the ground situation feels worrisome and there is dire need of concrete measures to fight out this menace to secure human health and overall environmental conditions.