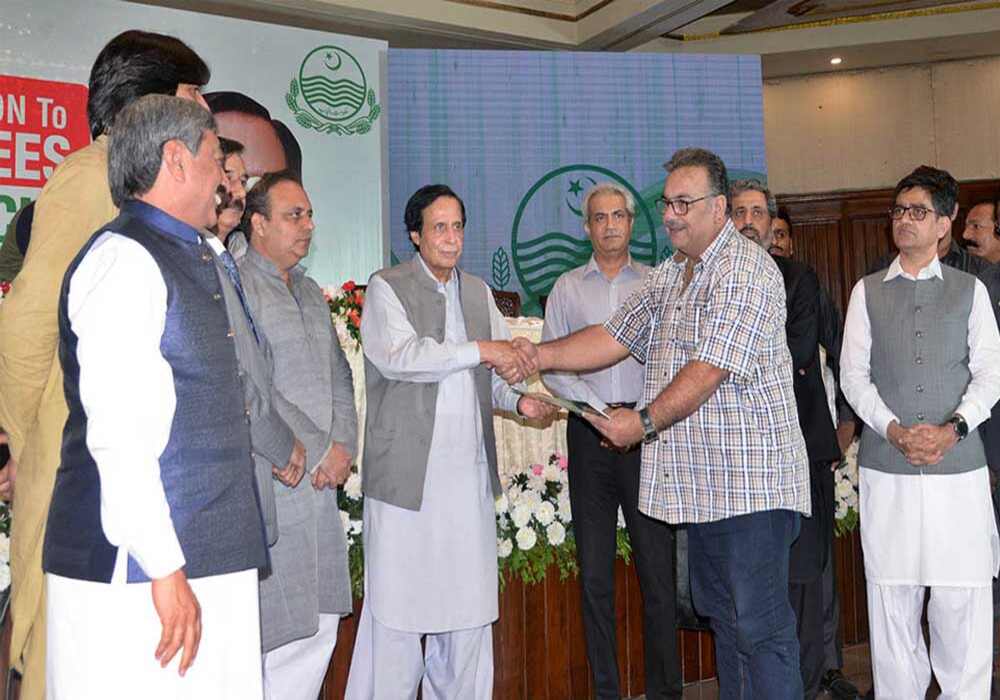 Elahi has said that his government has “provided only relief and would not give any grief”. “I daily think that which noble deed should to serve the creatures of Allah Almighty. The Punjab government is ahead of everyone with regard to doing welfare works.” The CM said while addressing the office bearers and members of Lahore Press Club in a function organized in their honour at 90-Shara-e-Quaid-e-Azam. Elahi said that he would ensure the system of donation and its usage mechanism is transparent. He asked why Shehbaz Sharif was trying to convince the UN Secretary General by holding his hand regarding the transparent usage of the funds.

Shehbaz Sharif knows how to ask for money and the nice manner in which he can ask for money, no one else can do so. What can be expected from Shehbaz Sharif and Miftah Ismail, the chief minister said, adding that “we are providing solar tube wells to the flood-affected farmers”. Pakistani citizen and American Businessman Tahir Javed will also provide assistance with regard to providing solar pumps to the flood affectees on my call. CM apprised that the relief amount to be given to the heirs of the deceased during the flood has been increased to Rs 1 million.

“We will provide financial aid amounting to Rs. 4 lakh on the collapse of a concrete house and Rs. 2 lakh financial aid will be given on the collapse of a clay house,” said the Punjab CM, adding that they would provide Rs. 75,000 to the owners of the livestock due to drowning of their livestock in the flood. CM said that more than Rs. 2.5 billion had been collected in the telethon for the flood victims, adding that we will ensure transparency in the relief package. Audit will also be done and those found involved in doing embezzlements will be punished.

“We will provide 40 percent subsidy in food items to the homeless persons due to flood,” CM Pervaiz Elahi said, and added that the journalists played a commendable role for bringing to surface the problems of the flood affectees during the flood. The work of journalists brothers is difficult and their problems should be resolved on priority. CM announced that a patrolling post will be set up in the journalists housing society to eradicate it from the land grabbers. A message has been conveyed to the Inspector General of Police that land grabbing on the plots of the members of the Lahore Press Club will not be tolerated.

He further announced that it is included in our priorities to provide shelter to the journalists adding that on getting an appropriate land, Phase 2 of Journalists Housing Society will be established. He further announced that free operation facility will be provided to the members of Lahore Press Club adding that immediate treatment of the office bearers will be started with the collaboration of Lahore Press Club and the expenses will be paid by the government. CM apprised that if there is a vacant place then the allottees of the B-Block Press Club will be provided at an alternate place.

The possession process to the allottees of the F-Block has been started. Later, the CM distributed the possession letters for the F-Block to the family members of the deceased journalists. CM also gave a cheque of Rs. 1.5 crore to the President Lahore Press Club Azam Chaudhry. CM also announced to increase the annual grant of the Photo Journalists Association to Rs1 million. CM also administered an oath from the members of the Governing Body of LPC. Shields were also distributed among the Adviser on Information Omar Sarfraz Cheema, Spokesman to CM Fayyaz ul Hassan Chohan, Muhammad Iqbal Chaudhry, Secretary Information Raja Mansoor Ahmed, DGPR Afraz Ahmed and to Rao Pervaiz Akhtar in the ceremony. President CPNE Kazim Khan, office bearers and members of LPC, and the concerned officials participate

Also, Chief Minister Elahi said that the speeches and quotes of Quaid-e-Azam Muhammad Ali Jinnah are a beacon of light for all and by adopting Jinnah golden principles of “Faith, Unity & Discipline” nation can put the country in the right direction. “I firmly believe that we can solve the problems of Pakistan by adhering to the sterling principles of Quaid-e-Azam and if we call ourselves an independent nation then the sagacious politics of Jinnah has a pivotal role behind it”, he said.