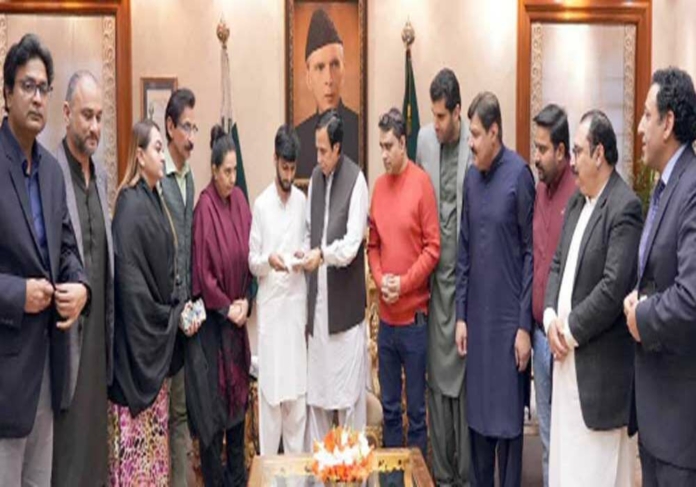 Punjab Chief Minister Chaudhry Parvez Elahi had a telephonic conversation with Chairman PTI Imran Khan on Thursday and discussed the current political situation with him.

Elahi inquired about the well-being of Imran Khan. The chairman PTI told him that he is recovering. Also, a delegation headed by Tahir Javed, a Pakistani-American businessman and leader of the Democratic Party, met with Chief Minister Elahi at his office and appreciated the exemplary steps taken by him for public welfare in Punjab. Parvez Elahi-led Punjab government has done a lot of work in three months, the delegation members said and added that he is setting new examples of public service by working day and night.

Like other family members, Parvez Elahi is convinced of the principles of tolerance and respect in politics, they noted and felicitated the CM for the agreement to declare Punjab and California as sister states. The delegation also invited the CM to visit the USA. CM Parvez Elahi said that he has received a special message from Mr Chris R. Holden, the head of the Appropriations Committee of the California Legislative Assembly and an invitation has also been given to visit California to sign the sister-state relationship agreement. The agreement will increase commercial, economic and business relations between Punjab and California. Similarly, bilateral relations will be promoted in the fields of education, health, IT, environment and culture while strengthening the mutual relations, he concluded.

Separately, Chief Minister Elahi met with Junaid Tariq, son of the late Tariq Teddi and handed him over a cheque worth Rs3 million. The CM announced Junaid would be employed at Chief Minister’s Office forthwith. Chaudhry Parvez Elahi announced to establish a trust for the welfare of deserving and destitute artists. The special trust for the artists will be established with a fund of Rs1 billion initially and a formal legislation will be made for establishing a special trust for the artists in this regard. A Board of Trustee has been constituted to ascertain the mode of disbursement of relief fund which will be headed by the Chief Minister. Secretary Information will be the Secretary of the Board of Trustee, Qavi Khan, Syed Noor, Sohail Ahmed, Nauman Ijaz, Javed Sheikh, Iftikhar Thakur, Qaisar Piya, Samina Ahmed, Fayyaz-ul- Hassan Chohan and Thakur Lahori will be its members.

The Chief Minister enhanced the monthly assistance of the artists from Rs5000 to Rs25000. The artists meeting with the CM expressed their profound felicity and thanked him. CM Parvez Elahi consoled Junaid Tariq, son of late Tariq Teddi, and expressed his affection by embracing him. The Chief Minister offered Fateha for the departed soul. CM Parvez Elahi stated, “We deem our responsibility to look after family members of the artists. Providing assistance to the artists is not a favour to anyone as it is our collective responsibility.” He lauded Tariq Teddi late for holding a distinctive place among his contemporaries. Junaid Tariq, son of Tariq Teddi late, thanked the CM and acknowledged that CM Parvez Elahi is a kind-hearted person having tender feelings for the poor.

Also, Chief Minister Elahi said that martyr Maryam Mukhtiar enjoys the singular honor of being the first female pilot of the Pakistan Air Force. In a statement issued on Thursday, the CM termed her an asset adding that she was the brave daughter of the nation who achieved the highest status of martyrdom on this day in 2015. The death of a martyr was the regeneration of the nation, he maintained. Maryam Mukhtiar sacrificed her life in the line of duty and she was an example of bravery and courage for the country. The nation will always remember her, he stated. Parvez Elahi said that this soil will always bear witness to the greatness of Maryam Mukhtiar, the proud daughter of the country.