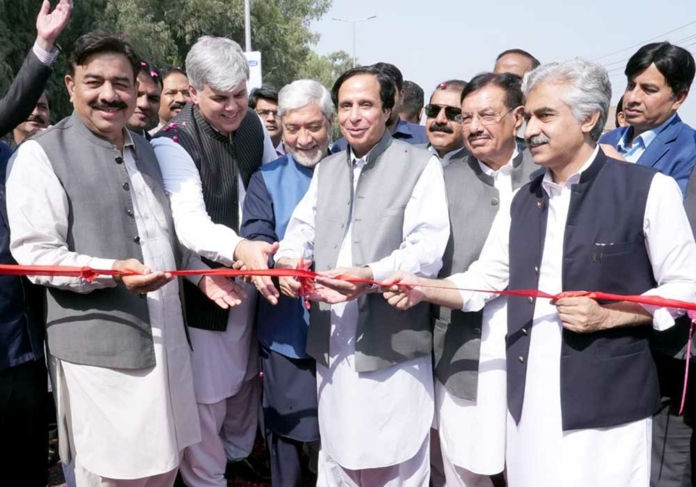 Addressing the inauguration ceremony, the chief minister said that the flyover will reduce travel time and ensure ease for commuters. The 606-meter-long three-lane dual-way flyover has been completed with a total outlay of nearly Rs4 billion.

Taking a jibe at the Pakistan Muslim League-Nawaz (PML-N), the CM said that Prime Minister Shehbaz Sharif has been trying to topple the Punjab government ever since he assumed the office.

“The results of by-elections are in front of everyone. They have perturbed Shehbaz Sharif and the federal government. The N-League and the Pakistan Democratic Movement (PDM) do not understand what they should do now and God willing they will not understand. The PML-N is a mafia and has engaged such people to further its agenda.”

The CM regretted that the PML-N is also doing politics on wheat. “Shehbaz Sharif’s enmity with the people of Punjab has come to the fore,” he said and pointed out that the federal government had given wheat to all provinces except Punjab. “It gave wheat to Sindh but disallowed Punjab to import wheat,” he regretted and added that the federal government is neither giving wheat to Punjab nor allowing it to import it.

He alleged that the PM had disbanded the Al-Mubarak Centre project like other welfare-oriented schemes. “A five-star hotel and a rooftop food court, as big as a football ground, were to be built in Al-Mubarak Center. “Traffic problems will also be avoided by connecting Al-Mubarak Center with Qaddafi Stadium through a tunnel,” he remarked.

He said that a patrolling post and Rescue 1122 center will also be built to ensure law and order in housing societies adjacent to Shahkam Chowk. “The funds for these facilities would be charged from the owners of the housing societies.”

He went on to say that the land transfer fee has been reduced by 100 per cent for the convenience of the common man.

Meanwhile, the CM said the Lahore master plan has been approved to deal with rising population and traffic problems. Green and brown areas have been reserved for construction in Lahore, he said. The government will also arrange an underground travel facility within the city of Lahore, he disclosed and maintained that this project will be a gift for the citizens of Lahore.

Senior Minister Mian Aslam Iqbal also addressed the ceremony and said that Shehbaz Sharif has turned Lahore into a concrete city and destroyed its beauty. “When Chaudhry Parvez Elahi became the chief minister in 2002, he devised a plan to run an underground train, but Shehbaz Sharif stopped it. The burn center project at the Jinnah Hospital Lahore was also started by Parvaiz Elahi but the N-League government stopped it too.

Meanwhile, CM’s advisor Nawabzada Waseem Khan Baduzai has been assigned the portfolio of Zakat and Ushr Department and Chief Minister’s Inspection Team. A notification has also been issued by the CM’s Office in this respect.

Also, the chief minister on Tuesday congratulated the newly elected body of the photojournalist association.