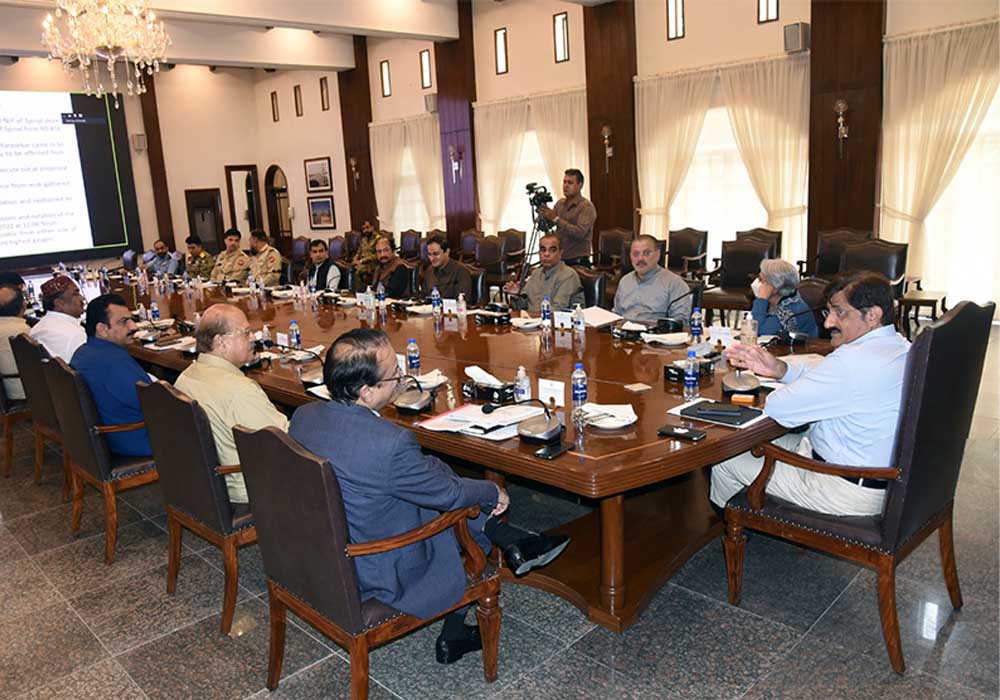 Presiding over a meeting to review the flood situation and relief work being carried out in the flood devastated areas, Sindh Chief Minister Syed Murad Ali Shah directed all the departments to dismiss the officers who were not performing their duties and put in their place efficient, hardworking, honest, and willing workers.

“We need best staff members who feel the pain of the affected people and believe in serving them, therefore placement of the staff of health, local bodies, PHE, irrigation and others be made accordingly,”  the CM said while presiding over a meeting at CM House on Tuesday.

The chief minister was given briefing/presentations by Irrigation, health and PDMA. He decided that the distribution of relief goods would be made right from union council level so that they could reach everyone affected and displaced by the heavy rains/flood.

The chief minister was told that the flood position in the River Indus was going to be normal. The Guddu and Sukkur Barrages have turned normal from last one week but there was only one problem at Kotri which remained in high flood and was still in the same position. But its water level has reduced to 575,435 upstream and 555,185 downstream. Manchhar Lake level has also come down from 122.75 RL on Sept 12 to 122.50 RL on September 13. The water level at Dadu-Moro bridge has also shown a reduction from RL 130.4 to RL 126.9. At this the CM said that it was a good reduction of 3.5 RL.

The level of Amri Bridge has also come down from RL111.4 to 19.9 RL. Shah said that the outflow from Manchhar to River has been recorded at 141,200 cuecs which was a good sign. It was pointed out that four cuts were given to LS Bund. As a result water level has reduced at Mehar and KN Shah by one foot and three feet respectively. The water level in MNV at RD-30 has also come down by three feet and Indus (Link-RD 45) by one foot. The work on Ring Bund to protect Bhan has been completed and water level was also on the decline.

The chief minister was told that there was enormous pressure on the banks of the spinal from RD-816 to RD-159. The catchment area of LBOD received heavy rainfall yesterday and even it was expected up to Wednesday which would exert further pressure on its embankments. The health department told the chief minister that it has set up 206 fixed camps where 317 doctors, 648 paramedics and 145 volunteers are working. The department has also arranged 382 mobile camps on which 396 doctors, 765 paramedics and 171 volunteers were working in relief camps.

On September 12, the doctors of both the camps, fixed and mobile, checked 371,440 patients in the camps, of them 18,804 had gastro related diseases, 20,968 skin related, 8731 Malaria (suspected), 80 dengue (suspected), 43903 other issues. Five patients died and so far, 169 have died in camps. The chief minister directed the health department to get the camps anti-mosquito spray and take care of all the people, particularly women, children and elderly people living in the camps.

The PDMA told the meeting that they have dispatched 6,873 tents, 21,200 tarpaulin sheets, 50,536 ration bags to all the six divisions for onward distribution on September 12. If the total figure of relief goods is counted it would come to 203,173 tents, 181,161 tarpaulin, 396,162 ration bags distributed in the affected areas so far. The chief minister concluding his meeting directed the Irrigation and local government & PHE departments to brief him about the water drained out from the cities and towns in the next meeting. Information Minister Sharjeel Inam Memon, just after the meeting briefed the media about the current position and the decisions taken in the meeting.