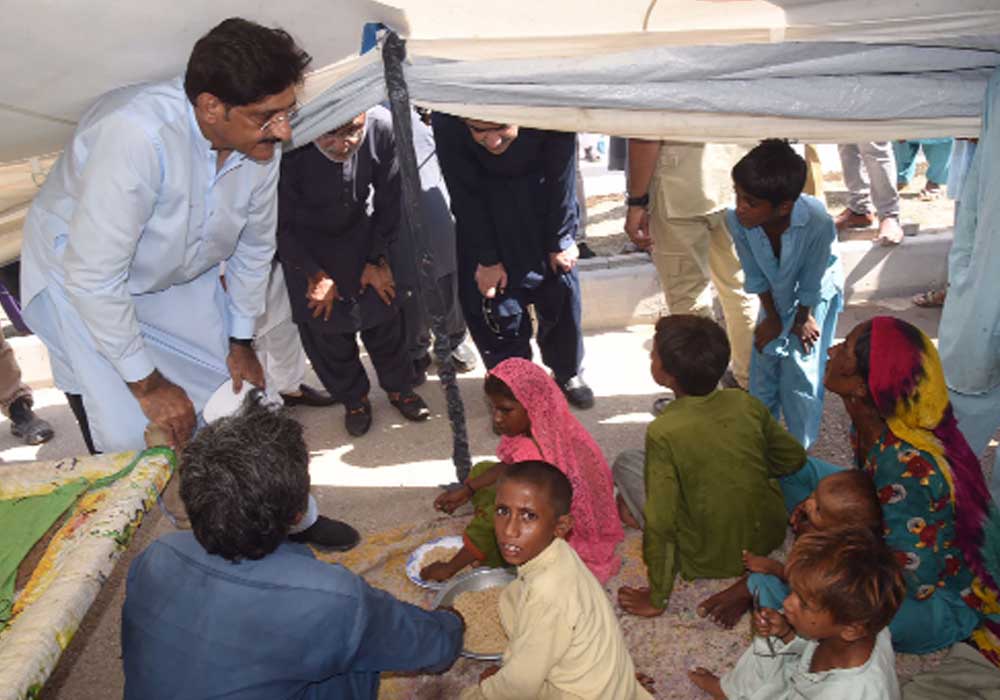 Sindh Chief Minister Syed Murad Ali Shah on his last leg of his visit to the Larkana division assessed the flood situation and witnessed the plight of affected people, either living in the camps, along the main roads, or in their houses surrounded by water.

He discussed the situation with the irrigation experts and ordered them to work out a plan to drain the water through different escapes into River Indus. “I have visited each and every flood-affected area of the province with the plan to assess and witness the situation so that appropriate measures can be taken to discharge the water, rehabilitate the displaced people and restore agro-activities to move forward.” He said this while talking to the media at different camps and health facilities on his last three-day visit to flood-affected areas.

Murad said the flood victims living in the camps and along the roads were keen to return to their homes if the water was cleared. “This shows that the gigantic task is to clear the villages, cities, towns, and the roads to pave way for their return,” he said and added the Hairdin drain has flooded the entire bordering areas of Jacobabad. Similarly, the villages right from Jacobabad Thul road via Bachro and Thul to Tangwani are underwater and people are living along the roads, therefore water has to dispose of, the CM said and added that the natural waterway was the only source to discharge it into canals and then release it into Manchhar and into the River.

“I have formed a team of Irrigation experts under Irrigation Minister Jam Khan Shoro to prepare a water escape plan and bring it to him so that necessary measures and decisions could be taken to dispose of it in the river. “This is not a solution to flooding one area at the cost of another, therefore a workable plan was needed, ” he said. Shah said that the water would be disposed of within one and half months, he told the newsmen at Dokri. He added that the level of Manchhar has come down from 123.5 RL to 120 RL. Over 200,000 cusecs of water were flowing into the River, and this speed would further accelerate within the next few days, Shah hoped.

Talking about relief work, the CM said that he has personally met with the people living in the camps and along the roads. “I know they are in real pain and distress,” he said and added their cries for tents were justified,” he said. According to Shah, the demand for 1.5 million tents despite hectic efforts could not be met. “We have distributed around 300,000 tents and ordered 600,000 tents but so far have received the delivery of 200,000 tons. Similarly, the demand for ration was being met but there was a gap between demand and supply.

He lamented that he met with some people at the camps where they were sitting under the shade of charpoys. “On my query, they told me that they have not been given a tent but the concerned Assistant Commissioner showed me the receipt that they had received the tent then and there,” he said and added such cases were earning a bad name for the government.

The chief minister started his day from Sukkur and went directly to Ratodero where he visited two relief camps, interacted with the affected people, and checked the stocks of medicines and their expiry. Shah was told by the affected people that there was a shortage of Panadol and Chloroquine tablets. The CM said that he has already approached different agencies to provide medicines for the treatment of malaria, and diarrhea.

Shah went to Miro Khan where he visited a mega tent city and met with the people living there. Comparatively the dwellers of the city were living in better conditions. Their buffalos were enjoying baths in the pond situated along the camp, a motor was installed where children were taking baths, and the ration was provided to them, therefore, they were cooking their food. Shah while going to Larkana met with affected people living along the road. A baby girl was born there, and the elder lady of the family was making tea on the mud stove.