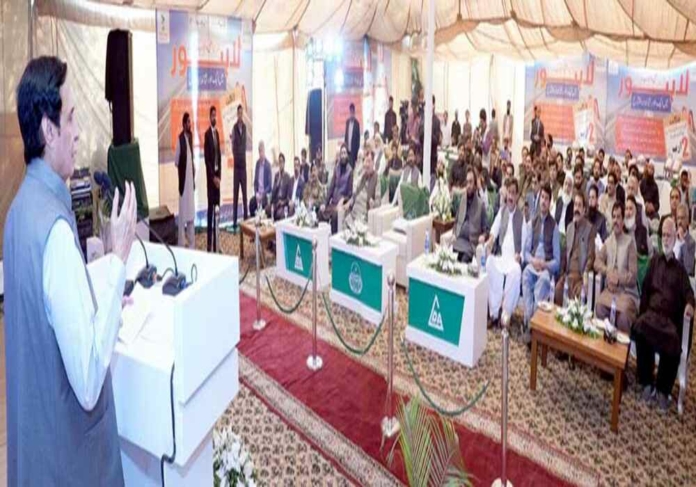 He stated that he requested General Qamar Javed Bajwa to talk with the Saudi king about abolishing the ban on the Tablighi Jamaat, which was duly accepted. The CM paid rich tributes to General Bajwa on performing religious services, adding that the COAS would always be rewarded for getting the ban lifted.

The chief minister, while talking to the participants of a ceremony after inaugurating the triple-linked roads at Raiwind Pajian Chowk, said that the reward of imparting religious education of the translation of Holy Quran and Nazra would go to Imran Khan and to the whole of PTI, adding that the work which “we undertook will remain everlasting till the world exists”. He stated that such a work has never been done since Pakistan came into existence.

The CM maintained that the Tablighi Jamaat is the face of all the Muslims across the world, adding that unfortunately due to few people the positive image of the Muslims was badly affected across the globe. He disclosed that he got constructed 30,000-capacity mosque in Raiwind during his first tenure and today religious jamaats come to Raiwind from across the globe. He said that he had directed all the departments concerned to expeditiously complete the development work in Raiwind. He directed the departments concerned to play a vigorous role for the development projects of Raiwind and achieve the completion target by March.

He apprised that patrolling posts and Rescue 1122 centres for giving emergency help are being established for the protection of life and property of the people in the Raiwind area. CM urged that it is inevitable to sow the seed of religion among the new generation adding that various steps are being taken including legislation to rid the youth from narcotics. He prayed that may Allah Almighty gives us the opportunity and ability to serve and work for the religion. He informed that we are also making a decision with the consultation of Ulema-e-Karam that Urdu Translation will also be recited along with the Arabic Khutba in the Friday prayers. By not incorporating the affidavit of Khatam-e-Nabuwat (SAW) in the marriage certificate was deemed to be a fraud. The CM stated that the religious congregation of Raiwind is not only the biggest tablighi congregation in Pakistan but probably the biggest tablighi congregation being held in the world. The believers come in the Ijtima (congregation) to seek the blessings of Allah Almighty adding that the participants coming in the tablighi congregation are our guests. It is our responsibility to take care of their facilitation and comfort. He stated that he has decided to improve and extend the infrastructure for the facilitation of the participants coming for the Raiwind Tablighi congregation. The CM while inaugurating the construction and expansion project of triple-linked roads for Raiwind unveiled the inaugural plaque and prayed for the prosperity and progress of the country.

MPA Hafiz Ammar Yasir while addressing the ceremony stated that by incorporating the affidavit of Khatam-e-Nabuwat (SAW) in the marriage certificate is a magnificent achievement of CM Parvez Elahi. He said that CM Parvez Elahi got the mission of doing public service from inheritance.

Meanwhile, Parvez Elahi presided over the Overseas Pakistanis Commission (OPC) meeting on Saturday in which the chairman of the district overseas committee for 26 districts and seven coordinators to the OPC were appointed.

The chief minister handed over appointment letters to the overseas district chairman and coordinators and accorded an approval to regularise the services of 47 staff members of the OPC and it was also agreed during the meeting about the proposal to set up overseas clubs in every division.