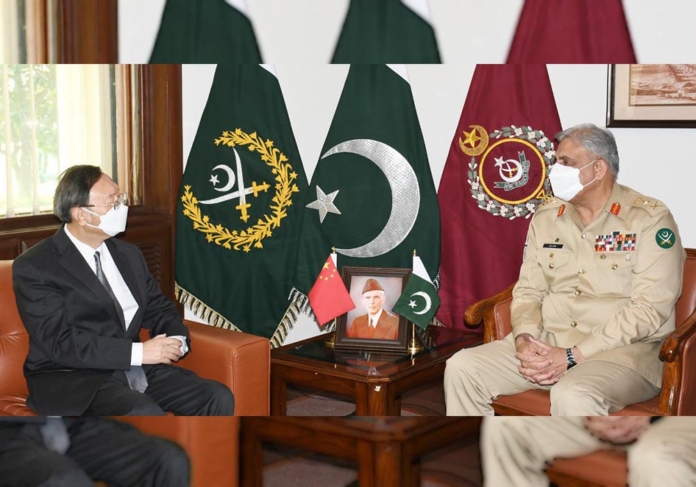 A top-ranking Chinese official on Wednesday thanked Chief of Army Staff (COAS) General Qamar Javed Bajwa for the special measures taken for the security of Chinese nationals in Pakistan and for efforts towards regional stability.

According to a statement issued by the military’s media wing, Yang Jiechi, member of the Political Bureau of the Central Committee of the Communist Party of China (CPC) and director of the Central Committee on Foreign Affairs, called on General Bajwa at the General Headquarters and discussed matters of mutual interest, defence collaboration, progress on China-Pakistan Economic Corridor (CPEC) and regional security. Talking to the dignitary, the army chief said Pakistan values China’s role in global and regional affairs and “we look forward to enhancing our strategic partnership”.

Gen Bajwa reiterated that Pakistan remains committed to cooperating with its international partners for peace and stability in the region.

“The visiting dignitary thanked the COAS for special measures taken for the provision of a safe and secure environment for Chinese personnel employed on various projects in Pakistan and efforts towards regional stability,” according to the statement.

As director of the Central Commission on Foreign Affairs, Yang Jiechi has a prominent role in China’s foreign relations. He has previously served as China’s foreign minister from 2007-13 and state councillor from 2013-17.

In a curtain-raiser on the visit, the Foreign Office said earlier in the day that during his two-day visit, Yang would hold talks with the foreign minister and call on the prime minister.

It further said that the visiting dignitary would be accompanied by vice ministers for foreign affairs and commerce, vice chairman of China International Development Cooperation Agency (CIDCA), and deputy secretary-general of the National Development and Reform Commission (NDRC).

The visit is part of the regular high-level exchanges between Pakistan and China. Recently, these interactions included a virtual meeting between the foreign ministers on May 11, 2022; Prime Minister Shehbaz’s telephonic conversation with Premier Li Keqiang on May 16, 2022; and the foreign minister’s visit to China on May 21-22, 2022.

According to a Foreign Office statement, Director Yang’s visit reflects the importance attached by Pakistan and China to further deepen their “all-weather strategic cooperative partnership”, reaffirm mutual support on issues of each other’s core interests, enhance economic engagement, explore new avenues of bilateral cooperation for betterment of the people of the two countries, advance high-quality development of CPEC, and coordinate positions on important regional and global issues of mutual interest.

During the meeting, matters of mutual interest, overall regional situation, and bilateral cooperation in various fields were discussed. The COAS said that Pakistan attaches great importance to its relations with Germany. He thanked the visiting dignitary for his services and appreciated his contributions to fostering strong ties between the two countries, besides his support towards defence/ security cooperation.

The ambassador acknowledged Pakistan’s continuous efforts for peace and stability in the region and pledged to play his role in further enhancing cooperation between the two countries.