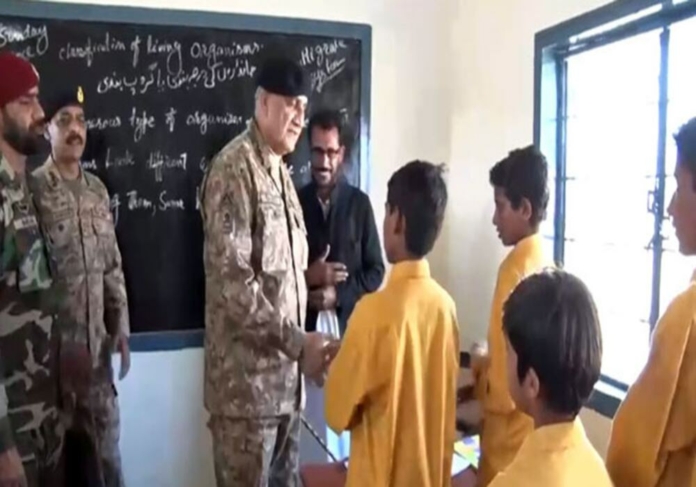 Chief of Army Staff (COAS) General Qamar Javed Bajwa said on Sunday that Pakistan Army will continue making all-out efforts to expedite the flood-rehabilitation process being undertaken with the support of federal and provincial governments.

General Bajwa visited Lasbella, Balochistan on Sunday where he inaugurated a pre-fabricated village in Lal Gul Goth that has been constructed for the flood-affected people of the area who lost their homes. Village Laal Gul Goth was badly devastated in the recent floods, with livestock, personal belongings of people and basic infrastructure completely lost. The new pre-fabricated village includes a primary school. It is lit by off-grid solar power and has also been provided with a tube well. Frontier Works Organisation (FWO) completed this project in record time as this was promised to the villagers by Pakistan Army.

The COAS was briefed by Major General Kamal Azfar, Director General FWO, about the progress of rehabilitation work for the flood victims. He met teachers and students of the newly renovated primary school at Lal Gul Goth and local villagers. High-ranking civil and military officials were also present on the occasion. Later, the COAS interacted with the troops of Quetta Corps, FWO, Frontier Corps (FC) Balochistan and Pakistan Coast Guards and appreciated their efforts during rescue, relief and rehabilitation process in the recent flooding. Lieutenant General Inam Haider, Chairman NDMA, and Lieutenant General Kashif Nazir, Engineer in Chief, accompanied the COAS during the visit. Earlier on arrival, he was received by Lieutenant General Asif Ghafoor, Commander Quetta Corps. Gen Bajwa is set to retire on November 29 and has been making farewell visits to various military installations across the country in recent days.