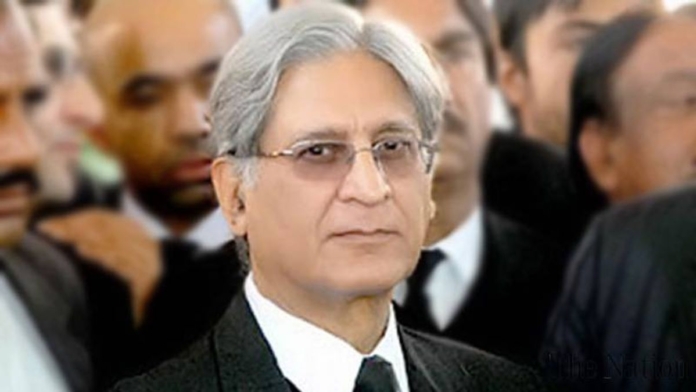 Islamabad High Court (IHC) has disposed of a contempt plea against Pakistan People’s Party (PPP) leader and senior lawyer Aitzaz Ahsan for alleging establishment to have helped Sharif family get acquitted in the corruption cases.

The IHC chief justice said that unnecessary things should not be given importance, further adding that contempt proceedings were not a solution in these cases.

Aitzaz Ahsan, speaking to media, had alleged, “Bajwa sahib has rescued them (the Sharif family) from conviction in cases, and he has committed a big crime.” He also said that the cases against Sharif family were open-and-shut cases with evident conviction.

Aitzaz was rebuked by PML-N as well as from his own party, PPP.

CJ Minallah asked during the proceedings if anyone had any doubt over IHC’s impartiality.

He added that if not, then there was no need to pay attention to someone’s irresponsible statement. He also said that the decision would determine the level of people’s trust.

Safdar’s lawyer said that the statement of Aitzaz Ahsan was against judiciary and institutions, further contending that a ruling of the court was criticized.

The IHC CJ said that online content against the court was made everyday, but it was not bothered as unnecessary things should not be given any importance.

Safdar assured the court that he had trust in the court. He said that the issue was not about his petition but was about a man who had been attending courts for the past 40 years. He also asked if the court could be under pressure of a neutral army chief as he could not even pressurize a civil judge.

CJ Minallah asked Safdar if he wanted that a decision like that taken in the case of Talal Chaudhry, Daniyal Aziz and Nihal Hashmi be taken here. While disposing of the plea, the IHC CJ said that an order would be issued in the case.