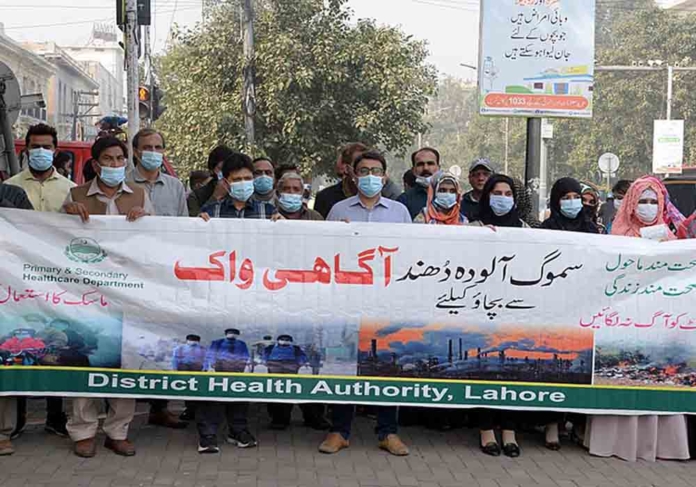 Authorities in Lahore and other cities of the province continued their crackdown on factors contributing to smog, Minute Mirror learnt on Saturday.

Likewise, 50 motorists were fined for plying smoke-emitting vehicles on roads.

Meanwhile, Punjab Chief Secretary Kamran Ali Afzal on Saturday directed authorities concerned to take action against housing societies dumping waste illegally. He issued these directives while presiding over a meeting to review cleanliness arrangements in Lahore and the performance of the Lahore Waste Management Company (LWMC).

Speaking on the occasion, the chief secretary said, “It is a collective responsibility of all and sundry to take care of sanitation and support the government in its efforts to improve cleanliness.”

Separately, a bicycle rally was also organised by the district administration to raise awareness against smog

The rally with the slogan ‘Zero Carbon Pledge’ was led by the commissioner. Women, children and civil society activists and professional cyclists participated in the rally.

The Lahore commissioner said that the administration was trying to reduce the number of vehicles on roads to combat smog. He added that smoke-emitting vehicles were one of the major causes of smog. He said five special anti-smog squads were inspecting industrial units.

The commissioner also presided over a meeting to review the implementation of the anti-smog policy. He directed officials concerned to depute permanent traffic teams in polluted areas of Lahore. He said that the Lahore DC would depute special squads on five major roads of the provincial capital. He directed officials concerned to establish teams comprising officials of the Lahore Development Authority (LDA), metropolitan Corporation Limited (MCL), Punjab Horticulture Authority (PHA) and the LWMC for sprinkling water on a daily basis. He also called for a targeted crackdown against encroachments creating traffic bottlenecks.