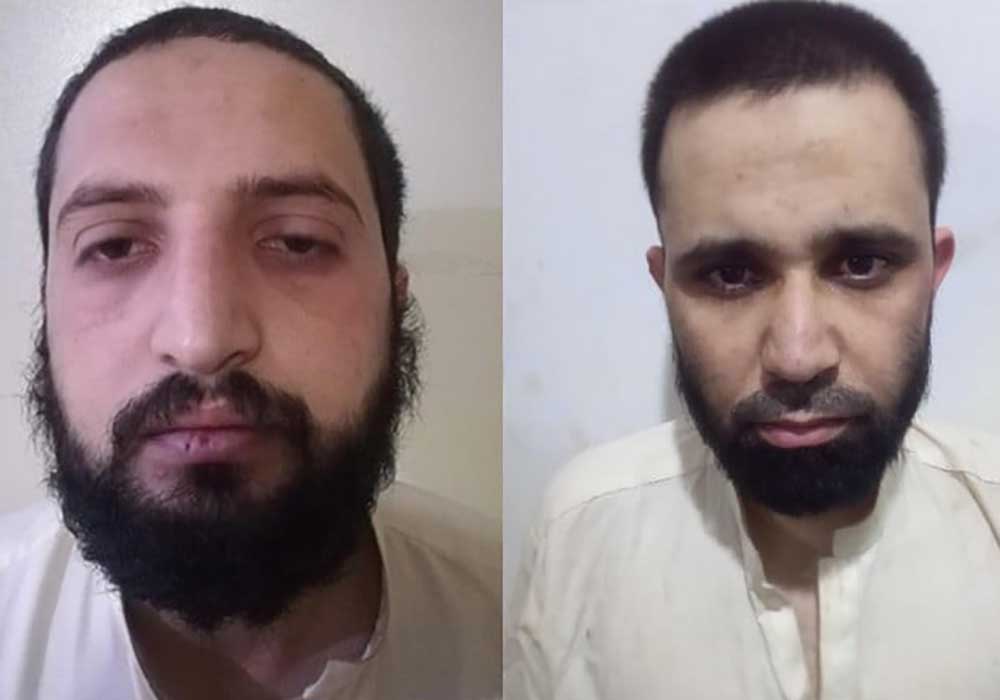 The Counter-Terrorism Department (CTD) of police on Saturday claimed to have killed two terrorists who were allegedly involved in attacking a police station in Peshawar, resulting in the martyrdom of three police personnel, including a deputy superintendent of police (DSP).

The CTD Peshawar conducted an operation in Sarband Shinwari area on a tip-off on the presence of the facilitators of the terrorist attack.

As soon as the CTD and other law enforcement personnel reached the spot, the terrorists started shooting. The security officials retaliated which resulted in the killing of two terrorists identified as Gul Hayyee and Hazrat Umar. Both are said to be residents of Bara Khyber and Mohmand Hal Yeka Tut in Peshawar.

A CTD spokesperson said that a large amount of arms and ammunition were recovered from the possession of the terrorists whereas two to three militants escaped by taking advantage of the darkness. Both the slain terrorists were wanted by CTD in several cases.

A heavy contingent of police reached the spot and started a search operation to arrest the terrorists who managed to escape.

Earlier, three police personnel, including a DSP, were martyred in a late-night terrorist attack on the Sarband Police Station in Peshawar.

Inspector General (IG) of the KP Police Moazzam Jah Ansari while talking to the media earlier on Saturday, said that the police “bravely repulsed the terrorist attack”.

According to Ansari, the DSP parked the vehicle at the checkpoint and was entering from the back gate when he became the target of terrorists.

He informed the media that for the first time terrorists used sniper weapons in Peshawar, while these “are being used in Bannu, Lakki Marwat and DI Khan”.

Also, funeral of martyred DSP Sardar Hussain was held at 3pm in Mathra area of Peshawar on Warsak Road, and was laid to rest in his ancestral graveyard.

He expressed grief and sorrow over the martyrdom of the DSP and two police personnel in the attack. In his message of condolence, he said the sympathies of the nation were with the families of the martyrs.

He said the sacrifices of police and law enforcement agencies were unforgettable.

He said the condemnable conspiracies of the terrorists to weaken the morale of the nation would not succeed.

He said the nation along with the law enforcement agencies was determined to root out the evil of terrorism.

In a statement issued here on Saturday, the chief minister said that the sacrifices of martyrs would not go waste. He said that police have fought with bravery and repulsed the attack.

Mahmood Khan added that the whole nation is standing shoulder to shoulder with the police in the war against terrorism. He prayed for the eternal peace of the martyrs and expressed his heartiest sympathies and condolence with the bereaved families.

Also, Khyber Pakhtunkhwa Governor Haji Ghulam Ali attended the funeral prayers of police personnel martyred in miscreants’ attack on Sarband Police Station and paid tribute to the police force for their sacrifices in the line of duty.

He also prayed to rest the departed souls of martyred policemen in eternal abode with peace and granting courage to bereaved families to bear the irreparable loss with patience.

He said we stand with bereaved families in this hour of distress and added that sacrifices offered by KP police for maintaining peace would not go in vain and always be remembered. Meanwhile, Interior Minister Rana Sanaullah Khan said that the federal government was seriously concerned over the worsening law and order situation in Khyber Pakhtunkhwa.

The minister criticized the KP government for not learning a lesson from the terrorist attack on Counter Terrorism Department Centre in Bannu last month, where law enforcers were held hostage by militants.

In a statement, he lambasted KP Chief Minister Mahmood Khan and said that all energies of the chief minister were focused on dissolving the assembly.

“The KP police are not safe from terrorist attacks, then what will be the state of people’s protection?” the minister posted on his twitter handle. He paid tribute to the martyred police officials and saluted their sacrifices.