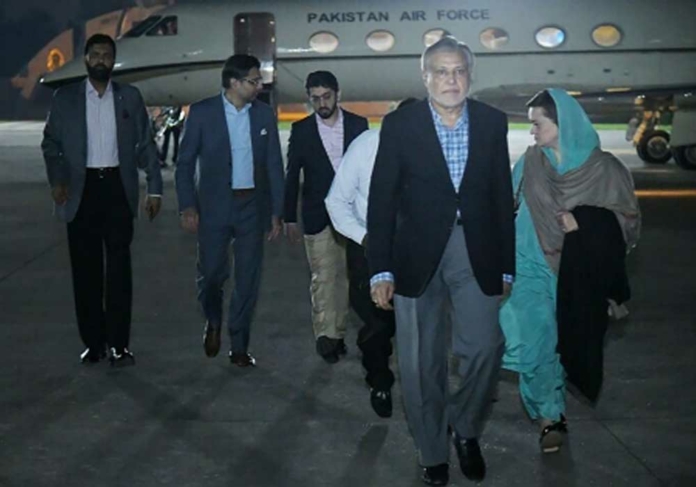 The former minister landed at the Nur Khan Airbase in Chaklala, Rawalpindi. He accompanied Prime Minister Shehbaz Sharif on his trip back to the country from London.

Talking to reporters at the airbase, Dar said that PML-N supremo Nawaz Sharif and the premier had tasked him with taking over the portfolio of the finance minister. He said he wanted to get Pakistan out of its economic rut and stressed that he wanted a strong and stable rupee.

He further hoped that “we will now head in a positive direction”.

During a previous tenure ending in 2017, Dar said Pakistan was going to become the world’s 18th strongest economy, but the country is now facing economic turmoil, exacerbated by widespread floods estimated to have cost it nearly $30 billion.

Dar is taking office, for the fourth time, with the challenge of getting the economy out of one of its worst balance of payment crises that has seen foreign reserves falling to a month of imports. The International Monetary Fund (IMF) board last month approved the seventh and eighth reviews of a bailout programme, allowing for a release of over $1.1 billion.

“Interest rate was lowest, the growth was highest, with the blessing of God, in decades, other macroeconomic indicators were excellent, reserves were highest, rupee was stable,” Dar said of his 2013-17 tenure.

“So, we will be trying to get to that direction, that we stop the way the economy has been falling, and we change its direction.”

The rupee rose 1.1 per cent in interbank trading and over 3 per cent in the open market after opening firmer in Monday’s morning session as investors anticipated Dar’s appointment, the state bank and forex exchange association said. Dar has favored a strong currency in his previous tenures as finance minister – from 1998-99, 2008 and 2013-17.

His return has been under speculation for months with certain top members of the PML-N – like Maryam Nawaz and Javed Latif – on several occasions publicly attacking and disowning his policies, particularly the inevitable reversal of the costly fuel subsidy introduced by the previous Pakistan Tehreek-e-Insaf (PTI) government.

Last week, an accountability court had suspended an outstanding arrest warrant against Dar, paving the way for the former finance minister’s return from London. Dar will reportedly take oath as Senator today (Tuesday) and assume the charge of finance minister after Miftah Ismail resigned on the instructions of the party leadership. The ruling party has repeatedly said it inherited a wrecked economy from former prime minister Imran Khan, who was ousted in a vote of no-confidence in April – an accusation dismissed by him.

As the new government took over, the rescue programme with the IMF was in the doldrums because of a lack of an agreed policy framework. Miftah Ismail said he pulled the country out of a near default, but markets did not respond positively, with the rupee tumbling to a record low and inflation crossing over 27 per cent.