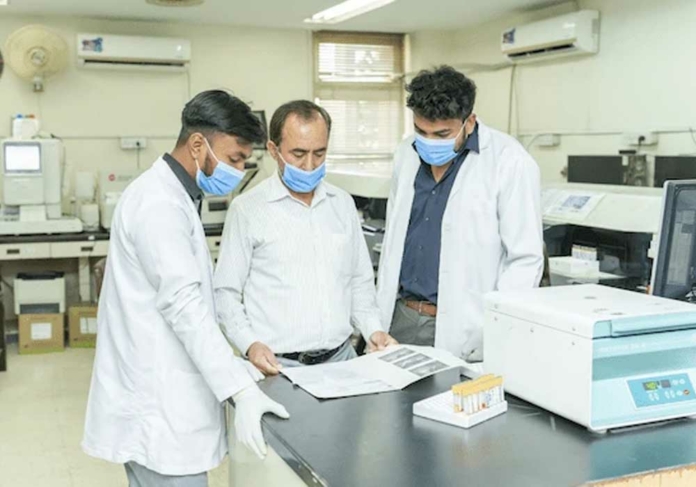 A majority of laboratories in the underprivileged areas of the country are being allegedly run by unprofessional, untrained and unqualified people.

It was observed that due to a lack of professional, trained staff, essential apparatus and also safety equipment in most of the laboratories, doctors don’t diagnose patients properly.

When a patient visits a hospital or clinic doctors refer them to a nearby laboratory for diagnostic tests, since the tests are often used in healthcare to determine physiological and biochemical states as well as organ functions.

While the young doctors belonging to various departments at the district headquarters hospital Kandhkot on the condition of anonymity also complained of these untrained and nonprofessional staff who are playing with the lives of human beings. They demanded from the Chief Minister of Sindh and the health secretary to take serious steps against those laboratory technicians and pathologists who were not following the medical rules and left the patients at high risk.

When approached by a famous pathologist of Sindh Rizwan Ahmed he told this correspondent that if the test is not properly conducted there are chances of the patient can be maltreated. He informed that according to medical precautions, gloves must be worn, special shoes can be used in laboratory rooms,  hand basins should be provided in every laboratory and blood bank while lockers should be available at laboratory rooms and air conditions (ACs) must be installed. However, safety equipment such as fire extinguishers, Personal Protection Equipment (PPE), medicated gloves, eye protectors, first aid kits, white coats, face shields, fume hoods and biosafety cabinets must be used in laboratories.

The pathologist also informed me of some basic safety rules while examining at the laboratory, he told me that according to medical, all equipment should be regularly inspected for wear or deterioration, there is no allow for cellphones or earphones during the time examination, wash exposed areas of the skin prior to leaving the laboratory, avoid skin and eye contact with all chemicals, avoid distracting or startling person working in a laboratory, don’t taste or sniff the chemicals.  In most laboratories, they don’t wear any proper dress in the tests rooms or even had never used gloves due to which there are chances of bacterial infections since the apparatus used by these unprofessional people are not properly sterilized and preserved just these apparatuses are proven to contiguous several diseases. It is being reported that the non-qualified and untrained people who are working at these laboratories are also using the same syringes for taking blood samples.

Although the pathologists and laboratory technicians were mostly unaware of the basic safety rules while examining the laboratory he lamented. However, the government should be strict action against pathologists and technicians who are not following the rules of the medical laboratories. It is to be mentioned that through various sources it was learnt that most doctors not performing their duties at their laboratories while all the work such as blood testing even computer write up is handed over to the staff. It is also reported that unregistered laboratories are being run freely across Sindh while the authority concerned had not taken it seriously and are playing with innocent people of the province. It is ironic to say that health secretaries, commissioners, Deputy Commissioners, DHOs and other authorities concerned pay no heed to this issue.