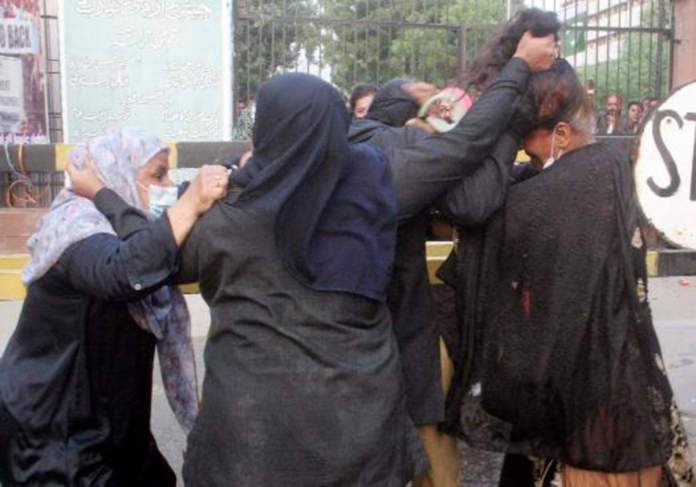 A large number of medical professionals, including doctors and paramedics associated with the Grand Health Alliance (GHA), which is a collective of healthcare workers protesting for better working conditions, followed through with their warning of marching toward the Sindh Chief Minister’s House after Friday prayers if the government failed to make the health risk allowance part of their salaries by noon.

The alliance had been holding a sit-in outside the Sindh Secretariat since past Monday. The protesters were stopped outside DJ Science College after Friday prayers by police who erected temporary barriers on Dr. Ziauddin Ahmed Road.

South SSP Syed Asad Raza told the media that negotiations were ongoing with the protesters. But afterwards, footage on TV channels showed policemen manhandling and brutally torturing the protesters and dragging them along the floor. Woman officers were also seen detaining female protesters.

SSP Raza said the Sindh government had issued a notification constituting a committee for holding talks with the protesters. He said the officials showed the notification to the protesters and asked them to vacate the main artery. “But the protesters rejected the notification and demanded the health minister personally visit them and assure them their demands will be accepted,” Raza said. He went on to say that the protesting doctors and paramedics had blocked the main road, causing trouble for commuters. “As a result, the police called in the riot squad, which used water cannons to disperse them and detained 25 protesters, including 10 women,” he said. SSP Raza said the female protesters would likely be released while the male protesters would be prosecuted under relevant laws. He also denied the claim that police resorted to baton-charging the doctors and paramedics. He said that 11 female police officers were beaten and injured by the protesting nurses.

Dr. Faizan Memon, Dr. Zareen, and Dr. Zain of the Young Doctors Association (YDA) told the media that the police officials had held talks with the protesters during which it was agreed that they would vacate the main road and resume their sit-in outside the Sindh Secretariat. “However, once we started moving towards the Sindh Secretariat, the police reneged on the agreement and resorted to baton-charging and using water cannons against the protesters,” Memon said. He claimed that all of the alliance’s leaders had been taken into custody. The protesters said that if the leaders of their alliance were not released immediately, they would be compelled to expand the scope of their protest. They announced that they would close all hospitals across Sindh if the detained doctors and paramedics were not released.

Dr. Mehboob Noonari, another leader of the protesting doctors and the paramedics, taking to the media said that they would not end their protest until SPP Raza, SHOs, and others involved in the manhandling of their colleagues were removed. He said that they were in contact with their fellows in the entire province to shut all hospitals and health units to either join their ongoing protest in Karachi or start demonstrations in their respective cities and towns. Dr. Noonari alleged that several of their fellows were brutally tortured and detained by police teams.

A notification issued by Services Department stated that a ‘grievance redressal committee’ had been constituted. The committee consists of provincial ministers for information, local government, labor, and the finance and health secretaries. “The committee will engage with GHA and give recommendations to the government,” the notification said.