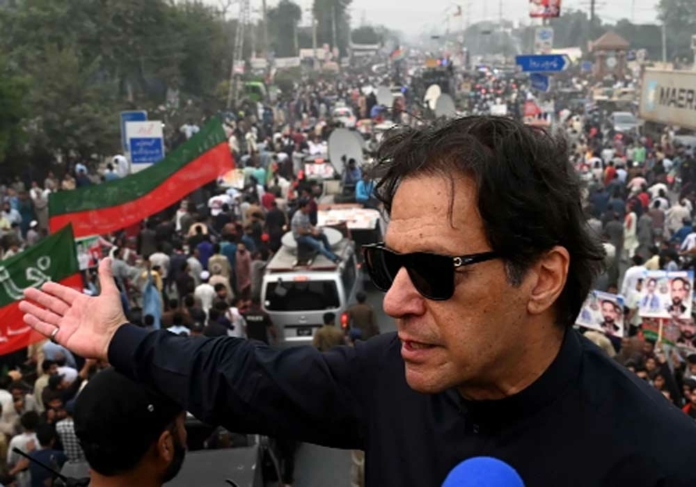 Pakistan Tehreek-e-Insaf (PTI) Chairman Imran Khan on Tuesday reiterated that no matter who comes into power, the economy can’t be improved as long as there is political instability in the country.

“Investors don’t invest amid political instability,” he said, underlining that political stability is only possible with transparent elections. “Trust of investors could only be restored through election,” he added while addressing a seminar. PTI chief spoke about the country’s state of economy and said it would have been difficult if it wasn’t for the help Pakistan received from friendly nations. “If we hadn’t received help from Saudi Arabia, United Arab Emirates, and China, we wouldn’t have had resources for payments,”

Imran Khan claimed that he still did not understand what those allegedly behind his government’s ouster were seeking when Pakistan had come out of multiple crises. “When we found out about the conspiracy [to remove my government], I sent Shaukat Tarin to tell the neutrals that the economy would be impacted because of the political destabilisation,” he said.

Imran subsequently criticised the Sharif and Zardari families, asking why they were “brought in to handle the country’s affairs”, pointing to the track record of their governments in the 90s.

Criticising the PPP and PML-N, the PTI chief claimed that the country has gone downhill since the two families have come into power. “I already said that the government which has come into power will lead the country towards a default. I’m afraid they [coalition government] will take Pakistan to the point of no return,” the former prime minister said during the speech.

He added that according to a survey, 88% investors think that the government’s policies are heading towards a wrong direction.

Imran alleged that rivers, forests, and agricultural land has been sold, and its money has been sent abroad. “There are mafias everywhere in Pakistan. Real estate mafia is the biggest mafia,” the former premier said.