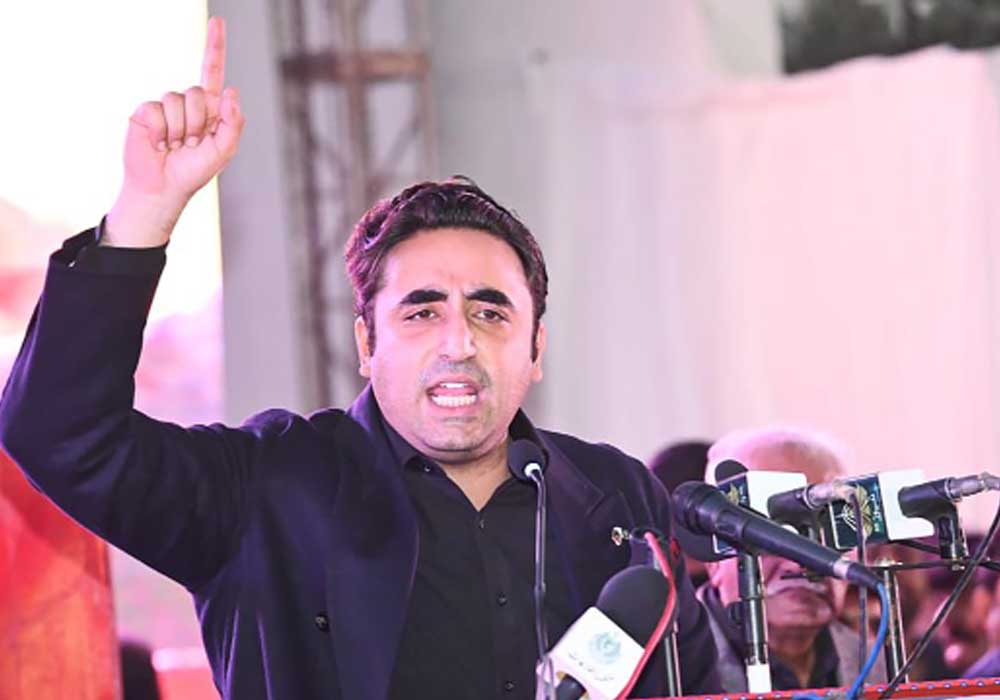 Pakistan People’s Party (PPP) Chairman and Foreign Minister Bilawal Bhutto Zardari on Tuesday lashed out at Pakistan Tehreek-e-Insaf (PTI) Chairman Imran Khan, saying that the former premier was raising a hue and cry because the army had decided to remain apolitical.

For this very reason the deposed premier had been pressuring the military establishment to involve itself in politics, he said while addressing a huge gathering in Garhi Khuda Bakhsh to mark the 15th death anniversary of slain PPP chairperson Benazir Bhutto.

Bilawal criticised Imran for trying to “make the army controversial again”. “We sent Imran home through constitution and this was the first time the parliament ousted a prime minister. The conspiracy against the ‘selected’ was not hatched behind closed doors; rather it happened in the streets and in parliament in plain sight. Now it is time to say to goodbye to the handlers of the selected,” he said.

He went on to say that the army had made its position on staying out of politics clear and it was now time to ensure that they fulfilled their promise. “This is the reason we are hearing screams from Bani Gala. Imran is once again trying to pressurise the establishment to meddle in politics. But let me tell you, this is your last warning: come back to the parliament… You are a stranger to the House. Come back and play your role in parliament. Come talk about reforms, whether it is the National Accountability Bureau or elections,” he said, adding that otherwise, the government would not be able to stop those who wanted to “victimise you”.

Talking about the rising terror incidents in the country, the foreign minister slammed Imran for “bending his knees in front of terrorists” without asking the public or parliament. “I will speak to the government and review the appeasement policy for terrorism. We will have to quit that policy and establish the writ of the state,” he maintained.

The FM also said that only the PPP had the ability to steer the country out of the prevailing crisis. “Only the PPP had dealt with terrorists effectively in the past and will do so now,” he added. During his address, he called on his rivals to “become humans before politicians”.

“In any other country, politics and rallies would have come to a halt after the havoc wreaked by floods. But even in the midst of a catastrophe, the fight for Punjab kept taking place, and [Imran’s] long march did not stop,” he said.

“On one end there is Imran and his ego and on the other end, we have flood victims. It will take time to fix all this,” he said. Bilawal pointed out that Pakistan was still trying hard to collect money from the world for flood-hit people and estimated that the country needed at least a year to collect $15 billion.

Bilawal also vowed to take slain former prime minister and his mother Benazir Bhutto’s mission forward and achieve it within the next 15 years. “This journey will be completed by us together,” he said.

Earlier in the day, a large number of party workers arrived in the city from Larkana to attend the event. Party workers in Karachi left from Sohrab Goth where a camp was set up to see them off. At the outset of his speech, Bilawal said that miscreants behind Benazir’s assassination thought they would halt her party’s journey forward. “I want to tell them to come and see how many people gathered here in Garhi Khuda Bakhsh. Even after all these years, BB’s jiyalas [supporters] are still present here.”

“These people have shown their loyalty towards her and have proven that they have not forgotten Benazir or her political ideas. We believe it when we say ‘aj bhi Bhutto zinda hay’ [Bhutto is alive even today],” he asserted.

Bilawal said his mother was the voice of the poor, an ambassador for the destitute, a true supporter of democracy, and a strong reply to terrorists. “She believed in the politics of hope … of truth … and of unity.”