â€˜Eternalsâ€™: A film packed with adventure and thrill 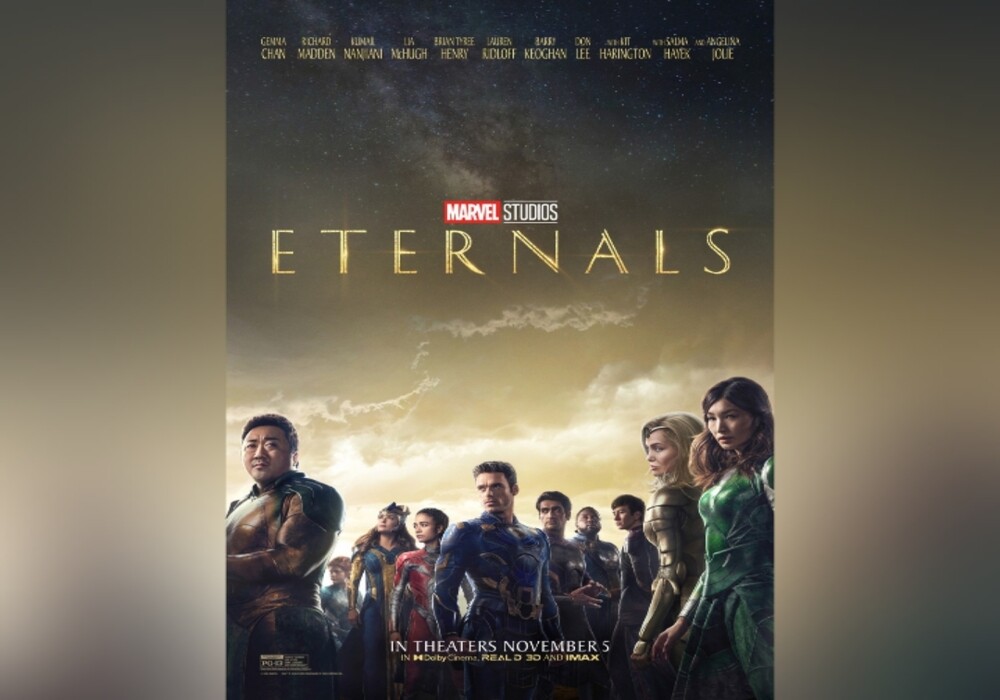 Directed by Chloe Zhao, Eternals (2021) is darker and more mature than the typical Marvel Cinematic Universe (MCU) productions. Released on November 5 of this year, it falls under the genre of sci-fi, action and adventure. With a total run time of 2 hours and 37 minutes, it has received a rating of 6.8/10 on IMDB.

The film opens with a synopsis of what the film is really about. The Eternals are an immortal force that reign on the earth to protect it from the evil of the Deviants.

As Sersi, a professor, is talking to her class of the existence of â€˜apex predatorsâ€™ (they hunt their prey for food but there is no other animal in their habitat who can prey upon them) an earthquake occurs, frightening the students.

But the seemingly natural disaster is actually caused by the Deviants. Who are the Deviants? They are a fictional race of humanoids.

The Deviants, Eternals and Humans are the 3 races created by the Celestials (the enormous godlike beings) some 7000 years back.

Pitted against the Deviants, the Eternals fight with a valour and bravery that has been captured stunningly. Arisham is their leader, who time and again reminds them of their purpose and life mission.

Arisham chooses Ajak as a leader. Ajak is a kind and sensitive person. The audience understands her compassion when she tells Ikaris to show his love for Sersi.

â€œYour faith in Arisham is strong. But youâ€™re allowed to live your life.â€

The film shifts from one location to another, moving between the past and present. From present day, London, the film relocates to a scene in Babylon in 575 BC.

It then moves to the present again in South Dakota and then takes us back in time. As Druig loses faith in his mission because Ajak is killed, he says referring to the destruction by the Deviants:

Coming to Thena, the Goddess Warrior, she cannot remember her life. As her mind and soul are taken over by the deadly Deviants, she tries to kill her fellow Eternals, but Gilgamesh helps her. He tells her, â€œYour mind is fracturing under the weight of your memories.â€ He protects her while risking his own life, but why? This is a question I leave for the reader to find out.

The Eternals wish to live a normal life. They want a family. They want love. But their mission stands in the way of their desires. As Ajak releases them from the burden of responsibility, she says, â€œFind your own purpose. And when we meet again, tell me what you found.â€

Meanwhile, Sersi can sense that something unusual is happening to the earth. She talks to Arisham, and he explains. The Emergence, the birth of a new Celestial, is what is causing the chaos on earth. And to counter the Emergence, the Eternals must come up with a solid plan.

And it is then that Phastos (Brian Tyree Henry) discovers the Uni Mind. With their new abilities, the Eternals then discover that they could join their will and intelligence into one powerful entity, which they called the Uni-Mind. Having no race or gender, the Uni-Mind is made of light, mind, and pure energy, and other species, such as humans, could join, safe from harm.

The director here shifts the focus to a lighter note. As he compares Ikaris, Sprite and Sersirse to Peter Pan and Tinkerbell, the mood shifts from being somber to a little laughter. What is significant about this parable is that it stresses on the power of love. In the love triangle where Ikaris loves Sersi and Sprite loves Ikaris, the dialogue spoken by Ajak is apt:

â€œWhen you love something, you protect it. Itâ€™s the most natural thing in the world.â€

Meanwhile, Sersi is having a hard time trying to figure out the powers she possesses. She cannot understand as she says, â€œI can put the Deviant to sleep, not kill it.â€

In the final scenes where the fight takes place between the Deviants and the Eternals, pitting Sersi against Ikaris, order is finally restored. Was Ikaris a traitor? Did he betray the Eternals? Who killed Ajak? Why did Sprite team up with Ikaris? Are the Eternals finally released from their mission?

These are potent questions, which potential viewers must find out themselves.

According to a critic, â€œEternals constantly bounces between not having enough and too many things going on.â€

It is in fact true. What couldâ€™ve been just an hour and a half long film lost its charm and became boring and a drag because of the big time span.

But on the whole, Eternals is a good film like the other Marvel productions.