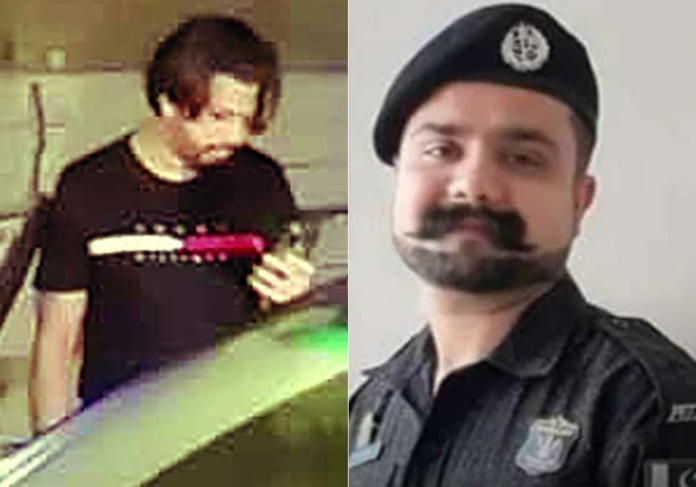 A policeman was allegedly shot dead by a suspect, who police say is an expatriate, in Karachi’s Defence Housing Authority (DHA) area during a heated exchange late on Monday night, officials said.

CCTV footage of the incident is making the rounds on Twitter, showing the suspect and the cop- both armed – disembarking from a black car and engaging in a heated argument.

As the situation escalated, the suspect fired a couple of shots at the officer from point-blank range and fled, leaving the policeman dead on the spot.

Police have managed to retrieve the vehicle and the alleged murder weapon, however, the suspect is still at large.

South SSP Syed Asad Raza said the two policemen – part of the recently-formed Shaheen Force tasked with tackling street crimes – were patrolling the area near Ideal Bakery in Clifton, Block 5 when they hailed down a car with tinted windows.

SSP Raza said the two policemen, who were riding a motorcycle, were “trying to take the suspect’s vehicle to the police station when the incident took place”.

He said that the cops were trying to stop the vehicle on the suspicion that the suspect was trying to “abduct a girl”.

“The suspect pulled out a pistol on the policemen, starting a heated exchange which resulted in an armed stand-off between the two […] The suspect refused to go to the police station and fired at one of the cops, killing him on the spot,” SSP Raza said.

The other cop opened fire at the suspect but he remained unhurt and managed to flee from the scene in his vehicle, the senior officer said.

SSP Raza said the suspect had been identified as a resident of DHA, adding that the vehicle and pistol had also been recovered. He said the killer would be arrested soon while “one of his associates” had already been taken into custody.

He said the suspect was an expatriate, adding that he lived in Sweden and had come to Pakistan on November 5.

According to him, the police had informed all the airports as well as the highway police about the suspect in an attempt to ensure his arrest at the earliest.

Meanwhile, a press release from the Karachi police spokesperson said that the funeral prayer for the martyred cop was offered at Garden Police Headquarters with several senior police officials present.

Later in the day, a first information report (FIR) was registered against the suspect on the complaint of Clifton police station Superintendent Muhammad Shabbir Ahmed.

The FIR was registered under Sections 353 (assault or criminal force to deter public servant from discharge of his duty) and 302 (punishment for murder) of the Pakistan Penal Code as well as Section 7 of the Anti-Terrorism Act.

However, police confirmed later in the day that the suspect had fled abroad.

“He (the culprit) fled in the small hours of Tuesday morning taking advantage of his dual nationality which he had hidden from the authorities concerned using his Swedish passport,” confirmed SSP Raza.

The senior officer opined that “it only brings the dire need of projects like Safe City Karachi and unified Excise Department data that had it been available, his escape overnight would not have been possible.”

“We will bring him back for his day of reckoning,” SSP Raza vowed.

South Deputy Inspector General of Police (DIG) Irfan Ali Baloch said the police would approach Interpol and the Federal Investigation Agency to bring him back.