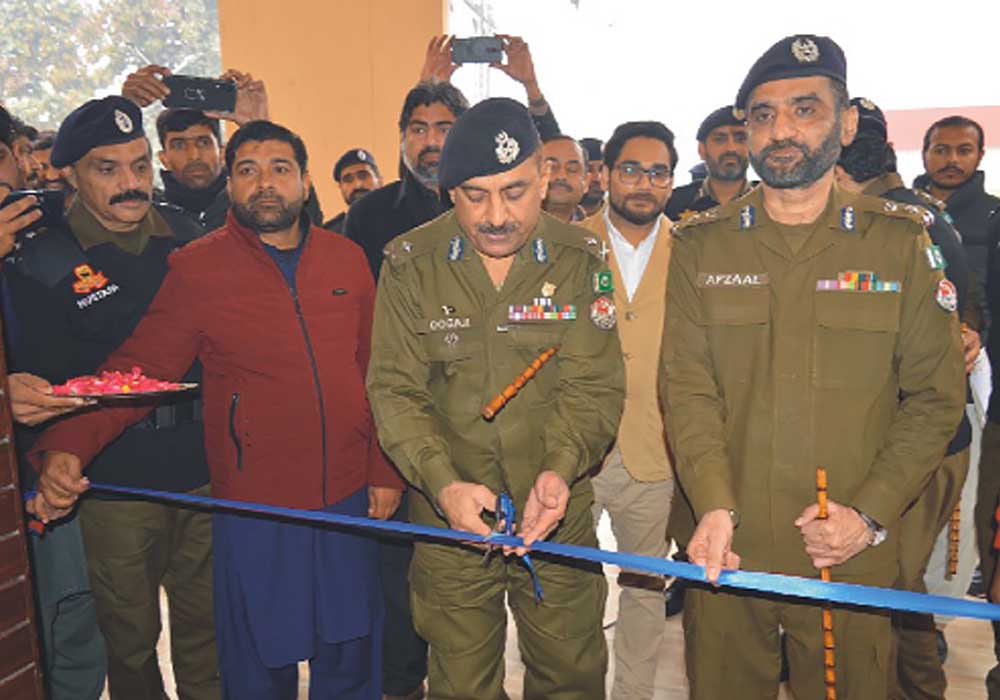 In a bid to provide better working conditions to the police employees for improved service delivery and pleasant atmosphere to the citizens, state of the art newly built four-storey building of Police Station Faisal Town was inaugurated by the Capital City Police Officer (CCPO) Lahore Additional IG Ghulam Mahmood Dogar on Wednesday.

A fresh and smart contingent of Police personnel presented guard of honor to the CCPO Lahore. CCPO Lahore inspected different sections of the building and lauded the quality of construction work as well as facilities provided to the PS Faisal Town. He hoped that the infrastructure would be looked after properly by the staff and administration of the Police station. Addressing the participants of the inaugural ceremony, CCPO Lahore Ghulam Mahmood Dogar said new infrastructure has been provided to Lahore’s filed force with state of the art facilities with a view to improve the working conditions of police stations and benefit citizens.

Additional IG Ghulam Mahmood Dogar said Faisal Town Police Station was a beautiful addition in the existing modern police buildings of the city. The CCPO continued that police stations were the basic units of policing and foremost source of justice to the suffering community. A police station should be a symbol of peace and shelter for the citizens where they could get timely justice and response with respect and dignity. He further said that uniformed and standardized improvements would be made gradually in all the police stations of the city.

The CCPO said, the staff of police station Faisal Town, now have been provided with a more favourable and conducive environment, should further improve their performance and serve humanity more diligently. Police personnel should improve image of department with their good conduct, character and behavior with citizens, he added. Priorities have been changed with the passage of time with a focus on strengthening police stations for being basic unit of the police. It would also help change the ‘thana culture’ which has been the utmost priority of the police higher command, Ghulam Mahmood added.

It is pertinent to mention that the construction work of new state of the art multi- purpose buildings of police stations Chung, Gawalmandi, Qila Gujjar Singh, Gulshan Ravi, Faisal Town as well as new buildings of Headquarters of Dolphins squad City Division and SDPO Naulakha Circle office was completed during last four and a half months of present tenure of CCPO Lahore Ghulam Mahmood Dogar. Ghulam Mahmood Dogar highlighted the important role of citizens centric policing in crime control and maintenance of law and order in the city.

The building of PS Faisal Town has been comprised of state of the art four stories, covering total area of three kanal with more than 40 capacious rooms, front desk, IT rooms, two separate lockups for male and females accused persons, four residential barracks for PS staff, kitchen and a Mess. The building has been completed with the approximate cost of 09 crore rupees with cooperation of Communication and Works department and it also has a water tank with capacity of five thousand gallons of water, a tube well as well as 100 kv transformer.

Ghulam Mahmood Dogar distributed commendation certificates among the officers of Building department, DSP Development Mustafa Hassan, Incharge Building Capital City Police Headquarters. He lauded the efforts of IG Punjab Police Muhammad Amir Zulfiqar and excellent support of Chief Minister Punjab Chaudhary Pervez Elahi for taking keen interest in completion of different multi storey and multipurpose buildings of Lahore police. It is pertinent to mention that Police Station Faisal Town was earlier functioning in a rented building which was not capacious. Lahore Police purchased land from LDA in 2015 and started construction work on it for this new building.