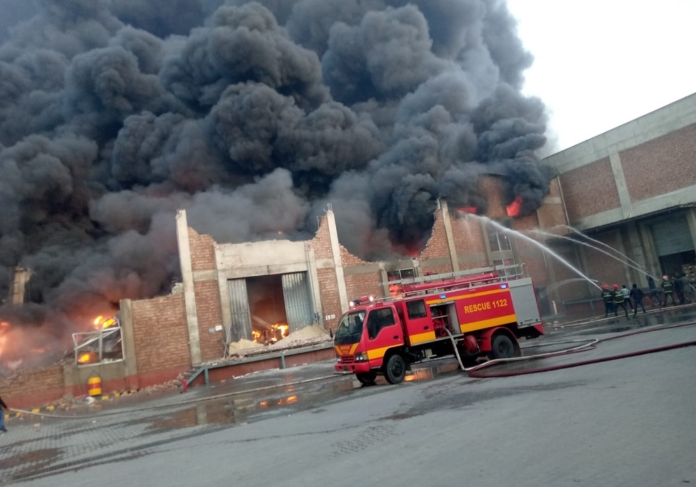 Seven people, including four children, of the same family, were burnt to death due to a fire
in the upper floor of a plaza in the central area of Faisalabad.

While the search is on for a girl, two siblings are among those who died, while the brother who survived has attributed the fire incident to the negligence of the FESCO staff. The teams of Rescue 1122 had to face difficulties in the area due to narrow streets and no roads and darkness at night.

According to details, three real brothers Umar, Farhan and Ehsan lived on the upper floor of the plaza in Montgomery Bazar Street No 2 adjacent to Ghanta Ghar (Clock Tower). At around 3am on Friday, a fire broke out in the house due to a shot circuit, which immediately engulfed the entire floor.

When the fire broke out, all the family members were asleep, so they could not get out of the house. According to rescue sources, the deceased include 60-year-old Abdul Sattar, 40-year-old Omar, 32-year- old Farhan, 12-year-old Arush, seven-year-old Noor Fatima, 10-year-old Muawiya Usman and four-year-old Bilal.

Ehsan, who survived the flames, said that the fire broke out around 3 o’clock in the night, on which he called FESCO Sub-Division Model Town to report it, but the phone was busy. When a boy was sent to the FESCO Sub-Division office, he saw that the staff had picked up the receiver and kept it on the table.

When FESCO staff members were told about the fire incident, they cut the power supply, but it was too late by then.

Deputy Commissioner Imran Hamid Sheikh, while expressing regret over the loss of precious human lives due to the fire, said that a comprehensive inquiry would be conducted into the incident. Expressing his heartfelt sympathy and condolence, he directed that all possible medical facilities should be provided to the burn victims in the Burn Unit of Allied Hospital.

He also issued an order to civil defence and other relevant departments to ensure fire safety measures in high-rise buildings of the city and directed the FESCO management that steps should be taken to secure the power lines passing near the buildings.

Punjab Chief Minister Chaudhry Parvez Elahi expressed regret over the loss of precious human lives due to the fire in Montgomery Bazaar Plaza in Faisalabad and sought a report from Faisalabad Commissioner Zahid Hussain. The CM also ordered an investigation into the fire incident. He also expressed his heartfelt sympathy and condolence to the families of the deceased and said that he was an equal participant in the grief of the families of the deceased.

It should be noted that Asia’s largest yarn market is located in Montgomery Bazaar, where millions of rupees are traded on a daily basis. Qaiser Shams, chairman of the Yarn Market, said that Montgomery Bazaar had a large number of electrical wires hanging around, and many times FESCO was contacted to bring them under one system, but no hearing was done.

He said that due to the very sad incident, the yarn market would remain closed today (Saturday) and no business or transaction would be done in it.